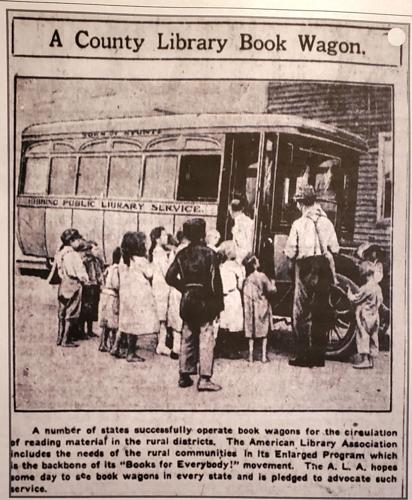 A photo from the News-Chronicle in 1920 shows a Library Book Wagon that was used in a number of states to successfully circulate reading materials to children and adults in rural districts. 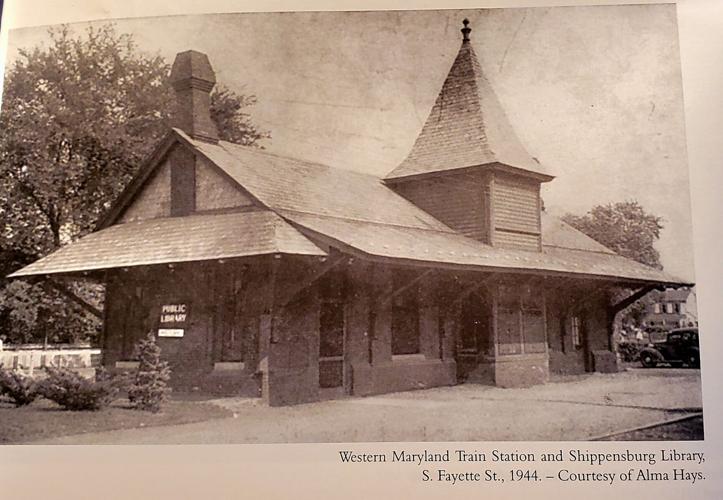 The passenger station as it appears in the early 1940s at 88 West King Street, when the Shippensburg Library was housed inside. Notice the LIBRARY sign that was added.

A photo from the News-Chronicle in 1920 shows a Library Book Wagon that was used in a number of states to successfully circulate reading materials to children and adults in rural districts.

The passenger station as it appears in the early 1940s at 88 West King Street, when the Shippensburg Library was housed inside. Notice the LIBRARY sign that was added.

Hello Readers! Welcome back once again to the Blast. I hope you are enjoying the tour of the town via the street names. Beginning this week and for the next several weeks my journeys around town will take us east and west on King Street, we’ll hit the back streets, go around the block, throw in a few country

scenes, and make a few stops at interesting places along the way, all in an effort to rekindle a few memories of the streets of Shippensburg as they used to be.

Our first stop, as mentioned last week, is the old Western Maryland Railroad passenger station that sat on the south side of West King Street. I have no recollection of this iconic structure because it was demolished in 1958, a few years before I came along. However, many have asked that I do a story on this building when it was used as the Public Library. I’m always happy to oblige.

If you follow Facebook, you may have noticed different posts about this structure on various pages from those who remember when the railroad passenger station served as the Public Library at 88 West King Street. It’s my own belief that many of the memories shared on Facebook are from those who remember attending the library at this location in the 20 years after its opening, and before it moved in 1957 to the current location on the opposite side of the street. If I’m mistaken, I will not be offended by anyone who reaches out to correct me. The beauty in all of the information shared is the fact that so many people have fond memories of this place and are willing to share their stories with the new generations of people who call Shippensburg home.

While this offering of the Blast was not meant to be about the history of the Shippensburg Public Library but more so about the building that housed the library, I did come across several old newspaper clippings and other information about the very first days of the library in Shippensburg that I feel are worth sharing, especially for those who may not have knowledge of how the library came to be in Shippensburg in the first place.

While looking through one of my favorite publication’s about Shippensburg, ‘Shippensburg’s 250 Year History,’ I came across information about the library opening its doors to the public. The article notes that after two years of fundraising and planning under the leadership of two very prominent local men, Henry E. Luhrs and Arthur R. Burkhart, the Shippensburg Free Library Association opened its doors at 45 West King Street on Jan. 15, 1934. Mrs. Blanche Hale was the first librarian. The article also notes that the Shippensburg Civic Club and the Lions Club supported the efforts of the library opening. In January 1937, the library moved into the vacant W.M.R.R. Passenger Station at 88 West King Street which had been remodeled prior to the library taking up residence. The library rented the structure for $10 a year.

In a newspaper clipping dated April 11, 1952, the headline read, ‘BOROUGH LIBRARY’S VALUE OOZES OUT FROM WITHIN TINY QUARTERS.’ The article highlights a talk given to the Shippensburg Rotary Club by the current librarian at that time, Mrs. Harper Wentz. According to Wentz, who was making no plea for improved quarters because she believed the need was apparent to anyone, told those in attendance the Shippensburg Public library was the only one in the nation housed in an abandoned railroad station, and it's over flows into two annexes-half in a garage near the library, and a room on the second floor of the First National Bank building. Obviously the need for the library had far exceeded expectations, which was a good thing; and the need for a new building obviously didn’t go unnoticed.

In 1956 Mr. and Mrs. Henry E. Luhrs and the Beistle Company bought the George H. Stewart, Jr., property at 73 West King Street and donated it to the Shippensburg Public Library. The following year Alex S. Liddle head up a campaign that was successful in raising $50,000 to reconstruct the house for

library use. The remodeled building was opened for operation on Dec. 9, 1957, and was dedicated on Nov. 7, 1958. The Shippensburg Public Library will celebrate its 65th year of existence in the new location this year, and oh how the building has changed over the course of the past six decades.

Stay tuned, at a later date, when I’ll delve into more of the history of the library. It certainly has served as a vital part o f the community for the past 65 years at its current location!

If you or anyone you know has memories to share about the library when it was located inside the old passenger station, I’d love to hear them. Don’t be shy…reach out to me via the office at: 717-532-4101 or send me an email at: kspenewburg.1986@gmail.com.

Remember to tune in next week as I continue my venture around town!