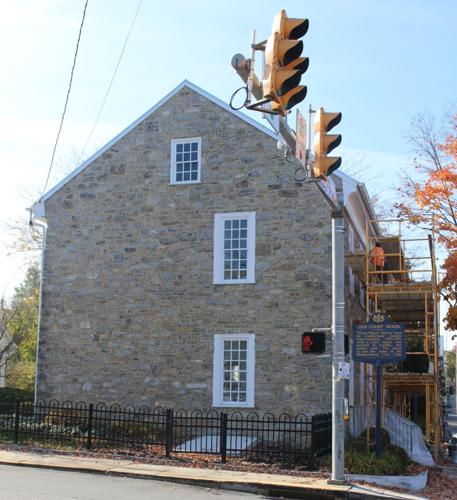 The east wall of the Old Court House in Shippensburg was demolished and completely rebuilt in 2002, the last time any major renovations were completed to the historic stone structure. 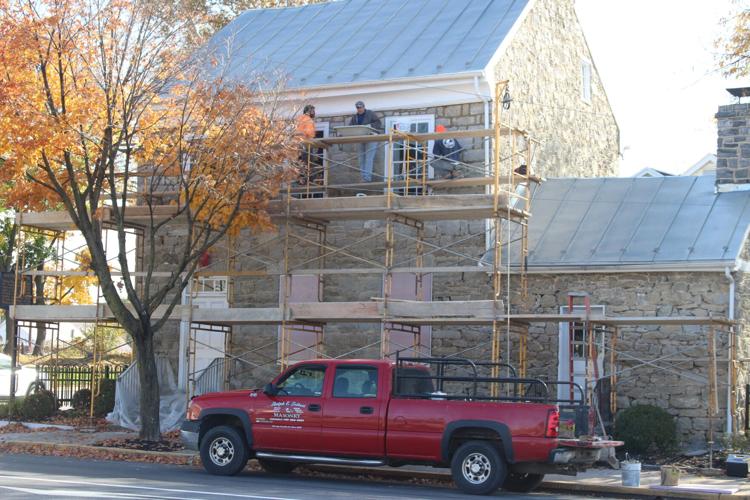 Stone masons Matt Osmond and Bill Spencer, along with Dan Friedman from Tolbert Masonry in Chambersburg worked to grind out and repoint the front wall of the court house last week. Spencer was one of the stonemasons who worked on the east wall of the structure in 2002.

The east wall of the Old Court House in Shippensburg was demolished and completely rebuilt in 2002, the last time any major renovations were completed to the historic stone structure.

Stone masons Matt Osmond and Bill Spencer, along with Dan Friedman from Tolbert Masonry in Chambersburg worked to grind out and repoint the front wall of the court house last week. Spencer was one of the stonemasons who worked on the east wall of the structure in 2002.

The Old Court House in Shippensburg, a historical landmark that dates back to the 1700s when it was built by Samuel Perry, was the recipient of a much-needed facelift last week to help the stone structure remain vibrant for decades to come. Listed on the National Register of Historical Places and located in Shippensburg’s Historical District, the structure known as Widow Pipers Tavern, is one of the oldest stone houses in Shippensburg.

“They were very prompt in putting this project on their schedule,” Basler said, “We couldn’t be happier to have them come back and do the work needed to help maintain the beauty of our (the Shippensburg Civic Club) home.”

Stone masons from Tolbert Masonry were involved in the completion of the renovation work on the east side of the building in 2002 (exactly 20 years ago this month) when the entire wall was demolished and rebuilt. While the work wasn’t as extensive this time around, Basler said she is just thankful the masons were able to do the job sooner rather than later.

“The last time there was any work done to the front of the building was in the early 1960s when Marian Freeman was president of the Civic Club,” Basler noted. “We have been very fortunate over the years in not having to do any major repairs to the front building. I was very happy when I learned that the masons were coming to do the repairs this month.”

In addition to repointing the front wall, the front stoops were also repaired.

“It’s amazing how much the community pays attention to what’s being done to the courthouse,” Basler explained, noting that many people have inquired about what’s going on with the home.

“In today’s society, old homes and historic structures such as this are not always taken care of and are oftentimes left to deteriorate. So many people have expressed appreciation to us for taking care of the building, which is encouraging because it lets us know that the community appreciates the historical value of the home as much as we do,” Basler said.

A Brief History of the Old Court House

The home was one of three stone houses built by Samuel Perry and is believed to be among the earliest west of the Susquehanna River. The tavern, run by Widow Jannette Piper, was situated at the center of the town that consisted of approximately 18 cabins, and was settled in 1730. The home was probably Shippensburg’s earliest public house and became the hub of public meetings for the new frontier settlement. It was here that representatives from Philadelphia chartered Cumberland County in 1750 and following this, the first Court of General Sessions of the Peace met in July 1750.

There were four terms of court conducted at the stone home in Shippensburg until the courts were moved to Carlisle in 1751. Because of this early history, what was the Widow Piper’s Tavern is now referred to as The Old Court House. The building was purchased by four local businessmen in 1928 and given to the Civic Club, which continues to own and maintain the building. Free tours are held on the second Saturday of each month from 1-4 p.m., April through November, excluding August. For more information or to schedule a tour call: (717)-532-5978.