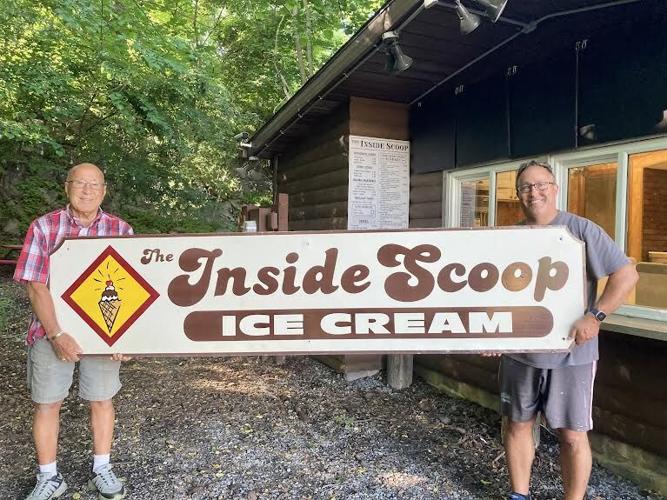 Jerry and Mike Peters hold the old sign from Jerry’s former ice cream parlor in Scotland. Mike opened The Inside Scoop along West King Street in Shippensburg on Wednesday, under the same name as his father’s former shop. 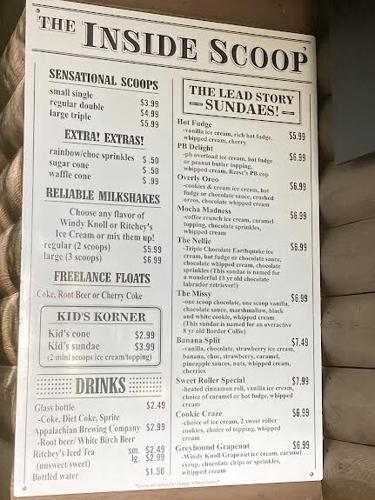 Stop the presses! Mike Peters opened The Inside Scoop ice cream shop on West King Street Wednesday, in the former Cabin on King location. The menu features a newspaper format, which we certainly love here at The News-Chronicle!

Jerry and Mike Peters hold the old sign from Jerry’s former ice cream parlor in Scotland. Mike opened The Inside Scoop along West King Street in Shippensburg on Wednesday, under the same name as his father’s former shop.

Stop the presses! Mike Peters opened The Inside Scoop ice cream shop on West King Street Wednesday, in the former Cabin on King location. The menu features a newspaper format, which we certainly love here at The News-Chronicle!

Editor’s Note: This article was edited to reflect a change in hours. The Inside Scoop will be closed Mondays and Tuesdays now.

Stop the presses, and head over to 227 W. King St. for a cool treat to beat the summer heat.

Mike Peters has opened The Inside Scoop at the former Cabin on King location, and his grand opening was held from 3 to 9 p.m. yesterday (after our press time, unfortunately!).

Indulge in a Leading Story Sundae with some Extra, Extras on top. Or maybe a Freelance Float is more your fancy? The Inside Scoop offers those, along with Reliable Milkshakes. The menu features a fitting newspaper theme for Peters, a journalism teacher and softball coach at Shippensburg Area Senior High School.

The Inside Scoop will feature 12 flavors of Windy Knoll ice cream (which was previously sold at Cabin on King), along with eight flavors of Ritchey’s ice cream, which is based out of Martinsburg, Pennsylvania.

“When I posted that I bought this place in October, a lot of people commented that I should carry Ritchey’s. I went and tried it, and it’s pretty phenomenal ice cream,” Peters noted.

Some of the flavors Peters prefers that they will sell include Windy Knoll’s Chocolate Grapenut and Ritchey’s Peanut Butter Cup. Two of the sundaes are lovingly themed around Peters’ dogs – Nellie (a chocolate lab) and Missy (a border collie). What would an ice cream parlor in Shippensburg be without a Greyhound flavor? Another sundae, Greyhound Grapenut, pays homage to Shippensburg’s beloved mascot. The Inside Scoop will offer some sugar free selections, and later on, some gluten-free options.

Peters jumped on the chance to purchase the former Cabin on King when it went up for sale, and will follow in his father, Jerry’s, footsteps upon his eventual retirement from teaching.

Jerry and Catherine Peters owned the former Green Thumb Landscaping, and eventually opened The Inside Scoop along Black Gap Road in Scotland (where Country Time Treasures is currently located).

Jerry and Catherine closed The Inside Scoop 20 years ago, but when Mike was registering the business with the state, he learned the business was still active under his father’s name, so he was easily able to transfer the title under his name. The former Inside Scoop sign from Jerry’s business will also be erected at the new site in Shippensburg.

“I thought I was retired, but my son had other plans,” Jerry quipped, adding he will help with some of the building maintenance at the new location, and maybe enjoy a sweet treat or two. “When he decided to buy it, he asked me, ‘So, are you ready to scoop ice cream again?’ I don’t know about that, but I will help out when he needs me.”

Mike said Jerry stained the cabin for him. They also had the deck and ramp removed, which was used when the cabin served as a barbershop. New roofs were added to the building and gazebo, and some other cosmetic improvements were made. The tables that sit behind the cabin will be painted bright ice cream colors, and strings of lights will illuminate the seating area and gazebo after dark. Mike noted he is appreciative of the help from the staff at Signs, Signs on King Street, and Chris Sheffield who helped with the sign facing the road.

“It’s such a neat location in Shippensburg,” Mike said. “It’s the perfect little ice cream spot. I had been thinking of what I want to do when I retire from teaching, and I thought this was a great idea. People are generally in a good mood when they go out for ice cream!”

Peters will have a staff of about five or six to start, including some of his current students and current and former softball players. He is looking forward to having music out back, with possible acoustic performers. The Inside Scoop can also be rented for birthday parties.

“It’s a happy place,” Jerry added. “I always liked to see the baseball players come in after games. We had grandparents that brought their grandchildren to our ice cream place. We went to eat one night, and they were there. They remembered me, and said, ‘That’s the guy that sold his ice cream place!’”

Mike said he thinks a lot of people will be happy to have an ice cream shop back in that spot.

“We are all looking forward to having a great time,” Jerry said. “And to make sure people are happy. We need that at this point.”

“We’re just looking forward to serving the community,” Mike added. “To have a fun place to go, forget about their troubles and enjoy an ice cream cone.”

For more information, visit their Facebook page at: https://www.facebook.com/The-Inside-Scoop-Shippensburg-Pa-100443565966411/?ref=page_internal.