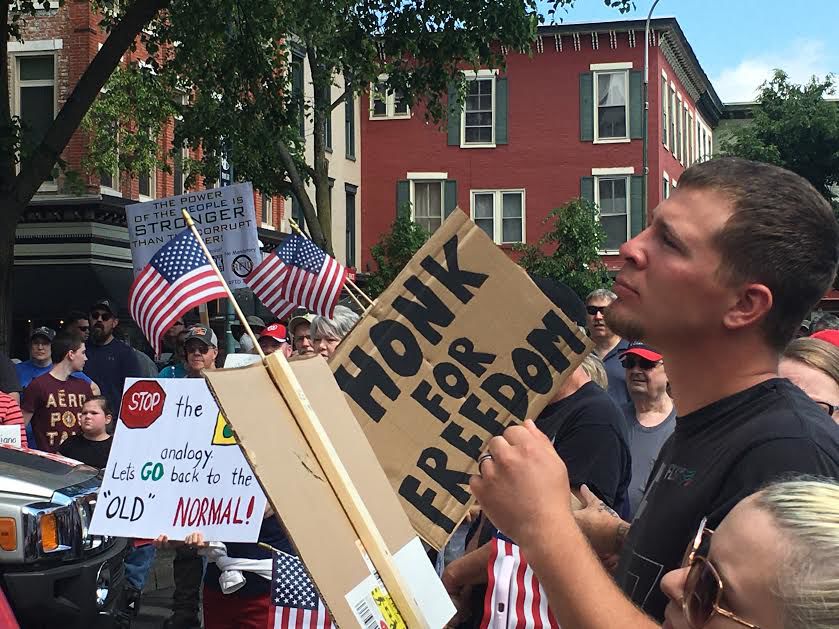 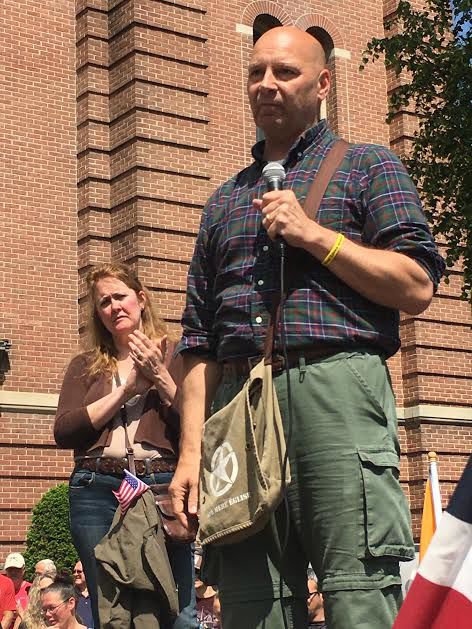 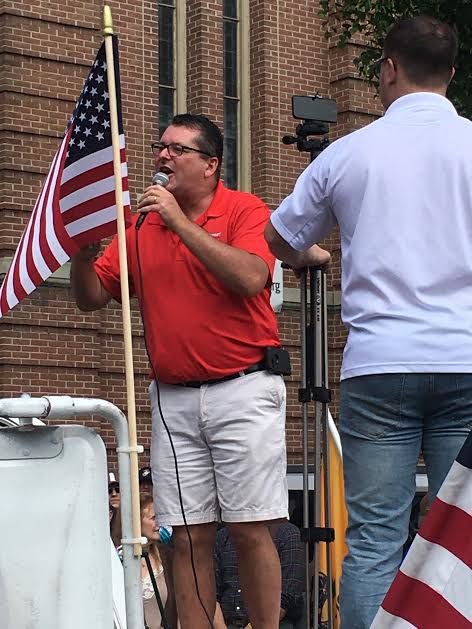 Numerous residents and legislators rallied in Chambersburg’s Memorial Square Saturday morning to push for the reopening of Franklin County amid the coronavirus pandemic.

The crowd chanted several times to “Open Up,” “Impeach Wolf,” and “Wolf Must Go,” as well as pushed for Secretary of Health Dr. Rachel Levine to resign from her position.

The speakers referred to Wolf as a tyrant and a power-hungry governor who has unfairly kept businesses closed over the last two months to prevent the spread of the virus.

“I am a small business owner. I deal with this day to day. But, that’s not why I’m here. I’m here for you,” Flannery said. “I hear numbers every day. How accurate do you think those numbers are? This virus, which is a horrible virus and I appreciate that, but the bottom line is, even if those numbers are accurate, it is still affecting less than one-half of 1 percent of people in this hot spot of Franklin County. We are going to shut down the economy for less than one half of 1 percent of our county? When you have double-digit unemployment, drug overdoses go up 4 percent, suicides go up 1 percent. Yet we are worried about a virus that’s affecting less than one-half of 1 percent of our population. Is that right?”

The crowd booed Wolf, and then chanted that he must go, and “Rise Up.”

Flannery then said he promised to stand up for his constituents’ rights when he took the oath of office.

“Regardless of what happens at the county level, I will continue to do that for the next 3 ½ years or until you vote me out,” he said.

Mastriano took to the platform next, asking the crowd if they have seen Wolf anywhere during the pandemic, and many replied they have not.

“I know so many of you are hurting and being brought down low by Gov. Wolf and his edicts, but last night I heard President Trump say churches can open. I’m going to church tomorrow, I don’t know about you. No one can interfere with your right to worship, not even a power-hungry governor.” Mastriano said. “We need to reign in the power of the governor because he’s out of control. It’s time for Franklin County to get back to work.”

“I am very passionate about what we are doing today,” he said. “We decided to open back up on Monday, the 11th. I had police come in on the 13th and issued me two citations on that day. Totaling a little over $200. Mr. Sheffield is going to be representing me in that, and to be honest, I don’t really care if the fine was 50 cents because I don’t believe it’s correct. What I really want to tell you today is I appreciate this. We have had a lot of support since we opened. We have had a lot of new members, and we’ve even had bikers come in from Harrisburg just to buy T-shirts and support our business. I’ve had people come in and drop off checks and tell me to support my family. I have two girls, a 4-year-old and a 11-year-old. This business is 7 years old, and it’s the baby in between, it’s something that is very near and dear to me. I’m not going to have one man come in after seven years of blood, sweat and tears and shut all that down on me. If it comes down to that or putting food on the table for my girls, that’s an easy answer any day.”

Some residents took to Facebook to express their disappointment in Saturday’s rally. Jasmina Ademovic, owner of the Falafel Shack, noted the rally blocked customers from entering her business. “They say their peaceful protest was in support of small businesses, then why come in front of my business and aggressively wave your Trump 2020 flag and hope to intimidate or scare us? This isn’t about masks or the coronavirus anymore.”

Scott Bowerman wrote: “I went to observe this morning’s demonstration on the Square, held in front of Central Presbyterian Church. A few comments:

2. Sen. Mastriano said churches should be allowed to open. Churches have been exempted from Gov. Wolf’s orders from the beginning of this crisis. Central, along with King Street, Grand Point and virtually every other church in Franklin County, voluntarily decided to suspend public worship and stream our services online in order to protect the vulnerable in our congregations and not contribute to the spread of the virus in our community.

3. I was appalled by Commissioner Flannery’s comments mocking the wearing of masks and hand-washing. In doing so, he has endangered public health and the well-being of his constituents.”

Rod “Hockerdog” Hocker of Johnnie’s Restaurant and Hotel Service in Chambersburg also attended the rally. He said his business has been affected by the shutdowns because 70 percent of food service is shut down, adding many restaurants are choosing to stay closed until the county enters the green phase because a partial opening just won’t benefit them.

“I think it’s sinful that Commissioners Keller and Ziobrowski stabbed Flannery in the back and did not move for us to reopen,” he said. “They left money cripple their citizens. In my opinion, I think they were afraid Wolf would pull funding for the solar-power project that was just approved.”

Hocker added the situation should not be politically-driven.

A couple who wished to remain anonymous said they felt the rally was an important exercise in freedom.

Stacey and Bradley Helfrick of Chambersburg brought their children to the rally. Their daughter, 9-year-old Addison, said, “We’re not afraid of the Big Bad Wolf!”

Stacey added it was nice to be out among people who “aren’t afraid of a non-deadly virus.”

“It’s time we get reopened,” she said. Stacey works as a housekeeper and has been out of work since March 13. She was only recently able to apply for unemployment because she was unable to get through due to the sheer volume of claims being made in the last few months.

“This is an important civic lesson for our children,” she added. “It teaches them the difference between being free and having socialism, and what the Constitution allows versus what the government is allowing us to do.”

“The truth was spoken today,” she said.

“And God was present today,” Chris Whitmore of Chambersburg added.

“It’s way past time for the area and businesses to open up,” Shatzer said. “There are places that are more of a hot spot than we are that have been open for more than a week. This is not about a virus. Nothing adds up according to their numbers. I have 12 employees at my salon, and none of us want a handout. We all want to get back to work. It is a mental and emotional drain for all of our clients. I don’t think they are smart enough to know this, but if they keep people not looking and feeling their best, they can control them. Fear is nonproductive. Fear is a liar.”

Lisa Fritz of Chambersburg, who works at Shear Innovations, said she used to be an independent until she started following Mastriano. She has since switched to Republican.