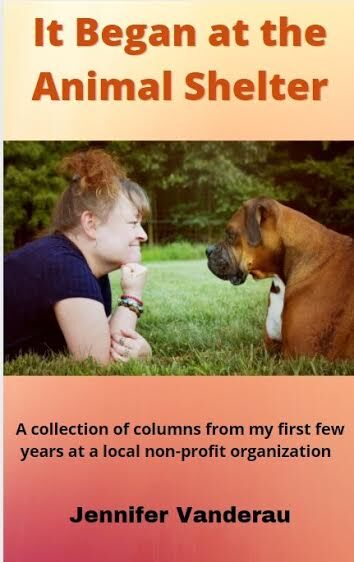 Jennifer Vanderau of the Cumberland Valley Animal Shelter has compiled her columns into a series of books that are available via Amazon, at the shelter and the shelter’s thrift shop in Chambersburg. One is called, ‘It Began at the Animal Shelter: A Collection of Columns from My First Few Years at a Non-Profit Organization.’ She is hoping to have six books published in the series. 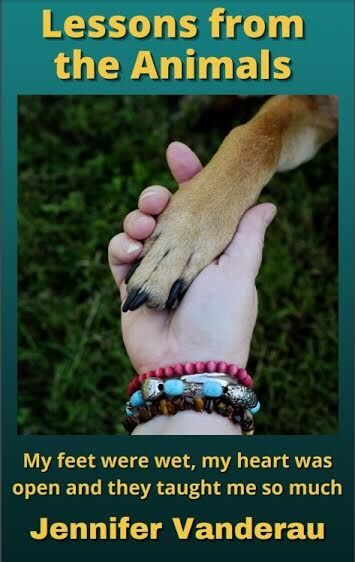 Jennifer Vanderau’s ‘Lessons From the Animals’ book is part of a six-book series that compiles columns she has written for the Cumberland Valley Animal Shelter for nearly 20 years. Two books have been published so far, and a third will be published soon.

Jennifer Vanderau of the Cumberland Valley Animal Shelter has compiled her columns into a series of books that are available via Amazon, at the shelter and the shelter’s thrift shop in Chambersburg. One is called, ‘It Began at the Animal Shelter: A Collection of Columns from My First Few Years at a Non-Profit Organization.’ She is hoping to have six books published in the series.

Jennifer Vanderau’s ‘Lessons From the Animals’ book is part of a six-book series that compiles columns she has written for the Cumberland Valley Animal Shelter for nearly 20 years. Two books have been published so far, and a third will be published soon.

Jennifer Vanderau has picked her own brain for nearly 20 years to deliver heart-warming, delightful and sometimes painful columns surrounding some of her favorite furry friends -- the animals of the Cumberland Valley Animal Shelter.

Vanderau has touched the lives of many in the area through the years, and is hoping her books, “It Began at the Animal Shelter: A Collection of Columns from My First Few Years at a Non-Profit Organization,” and “Lessons From the Animals” will reach the hearts of fellow animal-lovers everywhere. A portion of the proceeds will go to CVAS, where Vanderau serves as the shelter’s director of communications.

“I started writing my column in 2002 – man, that was a long time ago! I feel like I was such a kid back then. The columns have definitely evolved over time and continue to do so. They change with the times and the technology and the topics. It’s a fascinating look at how times used to be, really. I’ve been writing my columns weekly for almost 20 years, so we’re probably talking more than 1,000 columns. Wow! I only just now looked at it like that. Whew,” she noted.

Vanderau earned her undergraduate degree in elementary education from Shippensburg University, and went back to earn a master’s in communications/journalism. An internship at The Record Herald in Waynesboro led her to the job at CVAS.

“The job at the animal shelter, ironically, kind of fell into my lap. I had been laid off from a marketing job and my editor at The Record Herald’s husband was the executive director at CVAS, and they were looking for a PR person. She thought of me, I applied, and the rest is history. I’ve had animals growing up all my life, so in a lot of ways, it was a natural fit, but it wasn’t something I talked to career counselors about, you know?,” she said. “It’s funny how we sometimes get so focused on planning our lives that the real opportunities can come out of left field. Food for thought, at any rate. I think there’s a column in there somewhere.”

Vanderau said these two books span the first six years of her time at CVAS.

“They’re about 200 pages each. I’ve got four more planned and the third one is almost in the final stages of publication. I’m looking at having six total books,” she shared. “When I was thinking about compiling them, I decided to do it chronologically. Something about it just made sense to me. I considered putting them together by concept – informative, stories, shelter-related news – but for some reason I think putting them in order gives them an almost time-capsule kind of sense. That’s a little out there, but it’s the only way I can think to describe it right now. The overall series will give a sense of how much changes at an animal shelter over the years.”

Vanderau self-published the books through a platform on Amazon.com.

“I self-published them on Amazon and they’re available for Kindle as well as in paperback. I also have them at the shelter and the thrift store in Chambersburg (66 S. Main St.). It’s funny because had I thought about this when I first started writing the columns, it would have been a completely different story. The Amazon self-publishing platform really has given writers the opportunity to do it themselves. Formatting it can be tricky, but I found a fantastic group online that helps with that and it was so simple. Anyone can do it. You just don’t have the marketing power of the major publishers and that’s why I love folks like The News-Chronicle who help me out!”

“I think the inspiration for the columns are the animals. It sounds like a cliché kind of answer, but it really is true. They’re the reason I do what I do and why I’ve done it for the last 20 years. Even on the days when I would get discouraged, I’d look in the eyes of a dog or a cat, and know it wasn’t about me. When you find something like that, it can be difficult to let it go.”

Some of her favorite columns are when she takes readers on a journey through life from the animal’s eyes.

“I think my favorite columns are when I write from the animal’s point of view. It gives me an opportunity to delve into the ‘fiction’ side of writing and that’s one of my favorite genres. Plus, I think any time we can see life from our animal’s perspective it helps us understand what it’s like for them a little more,” she noted.

Vanderau hopes the books shed light on the day-to-day operations of an animal shelter for readers, and “maybe realize the true gift animals bring to our lives.”

“I also kept in the columns where I’m talking about animals looking for a home or the donations that the shelter really needs. I did that consciously in an effort to let the readers get an inside glimpse of sheltering life. When I first started so many moons ago, I had no idea why we needed liquid laundry detergent or why there were washing machines there. What? I told you I was a kid when I started! But I realized I just didn’t really understand the day-to-day life at an animal shelter. I kept the columns in for that reason.”

Though the past year has been tough on the shelter, its animals and staff with the pandemic and closures, Vanderau said CVAS has fared very well during the health crisis.

“Surprisingly, the shelter has done relatively well during the pandemic and I cannot say enough about the generosity and kindness in this community. It really is the community that keeps us going. We adopted almost 700 animals in 2020, and I think that’s utterly remarkable given the situation in which we found ourselves. And the donors and supporters continue to help us, knowing that we’ve been hurting because we can’t do our fundraisers. In some respects, the pandemic really has brought to light the good in people. It’s poignant and heartwarming.”

She added the shelter continues to conduct adoptions by appointment to keep everyone safe. She is concerned that if someone there contracts the virus, there will be no one to care for the animals during the quarantine period.

“We have a few of our long-term volunteers who come in to spend time with the animals, but other than that, it’s just our staff there day in and day out, making sure those babies are cared for. We want to remain diligent in doing so because if one of us comes down with the virus and the rest of us have to quarantine, I have literally no idea who will care for those animals. It scares me to death to think of it, actually.”

Vanderau’s columns will continue to peer into a day in the life of the animal shelter, and can be found on page 4 of The News-Chronicle’s Weekender each Thursday.

“I’ve been incredibly humbled and happy to be given the opportunity to have my words and thoughts reach so many people. I have a lady in North Carolina whose mom clips the columns from the paper and sends them to her. I also know of a lady who reads the columns to her grandchildren. That’s amazing, and I think a real part of human existence. Sharing stories with each other, listening to or reading the words and considering what life is like from another perspective is a powerful experience. And it’s so important. It thrills me to be able to share that with as many people as I can.”

Though Vanderau credits the many warm hearts of animal-lovers in the area, she would be remiss if she didn’t credit the sweet babies they care for in the shelter.

“I think a lot of it has to do with the animals, though. There’s a major connection with our four-legged friends that sometimes goes beyond the ability to adequately describe and express. Animal-lovers get it and I think that’s why so many of the stories resonate with people. Animals have the ability to bring people together like nothing I’ve ever seen before. And to just be a small part of that…well, it’s the greatest gift in the world.”

For more information on CVAS and the animals they have for adoption, visit: http://www.cvas-pets.org/.