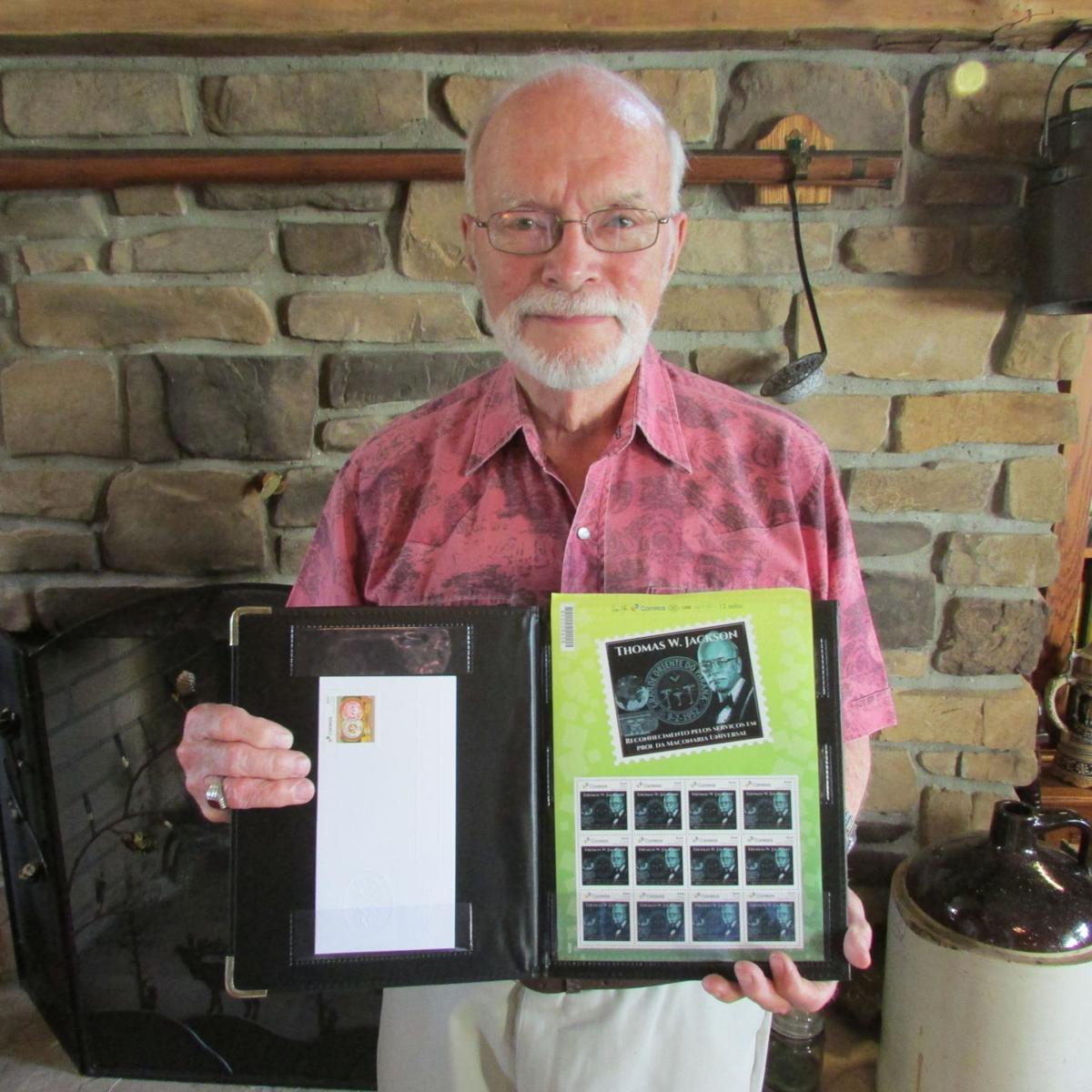 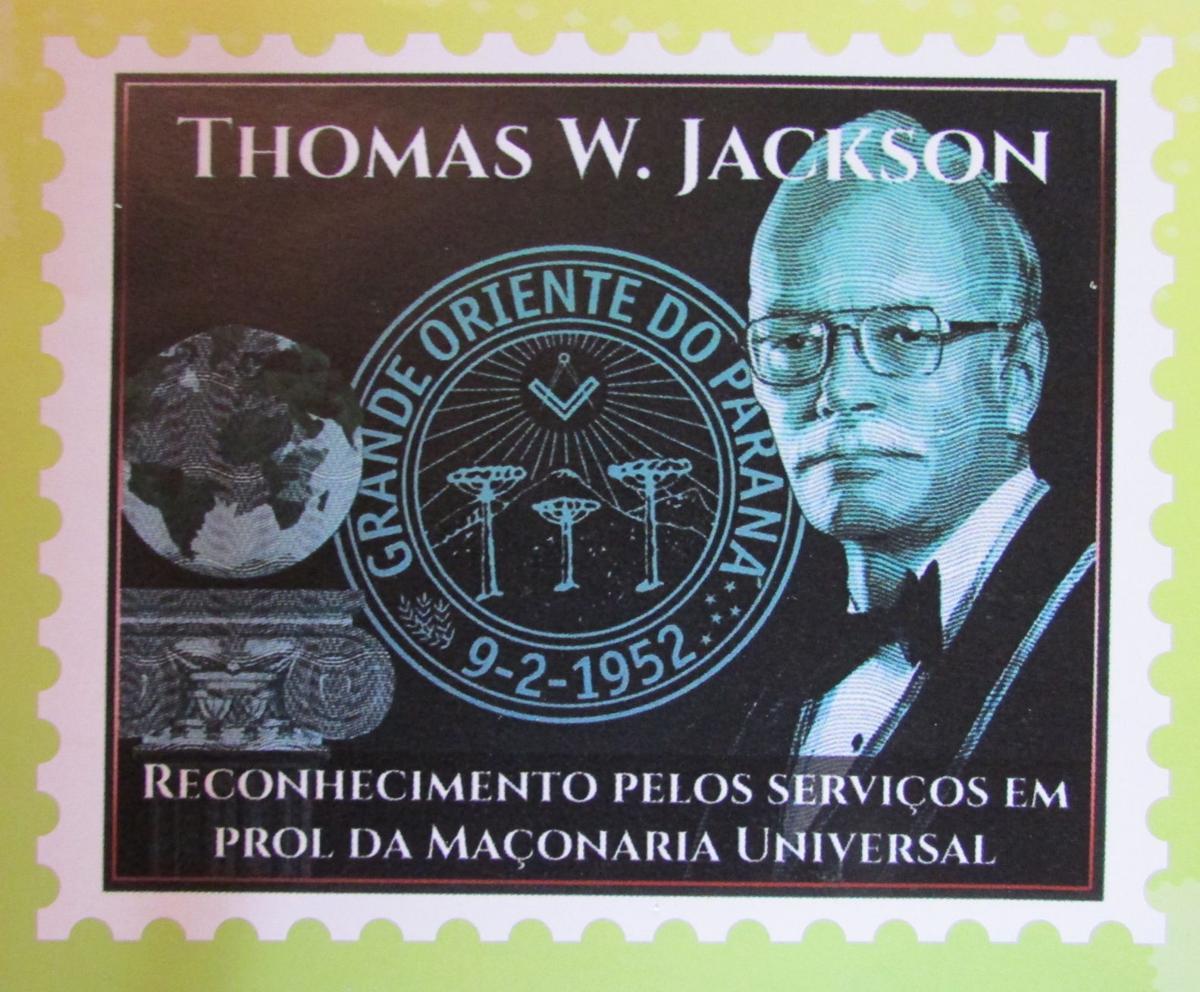 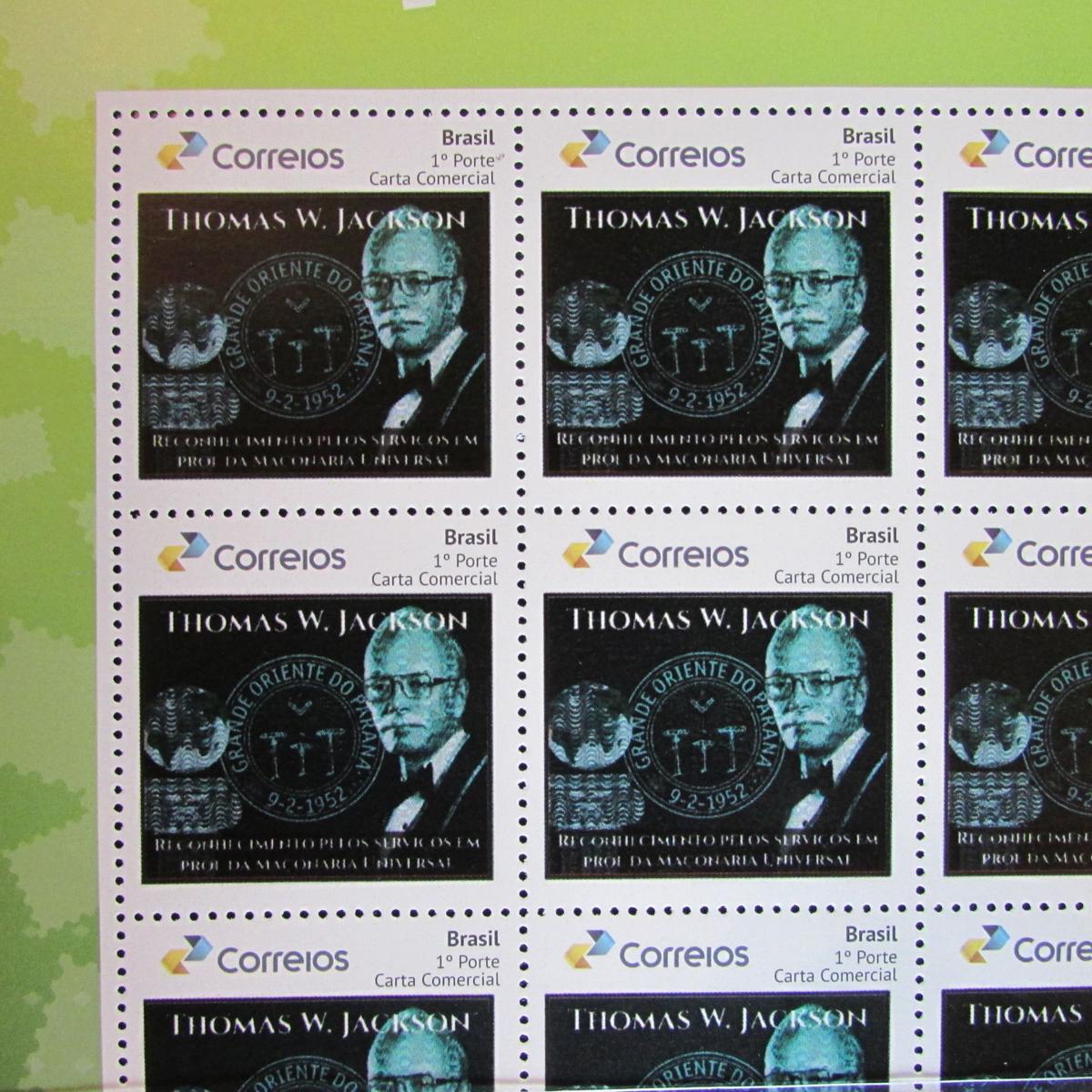 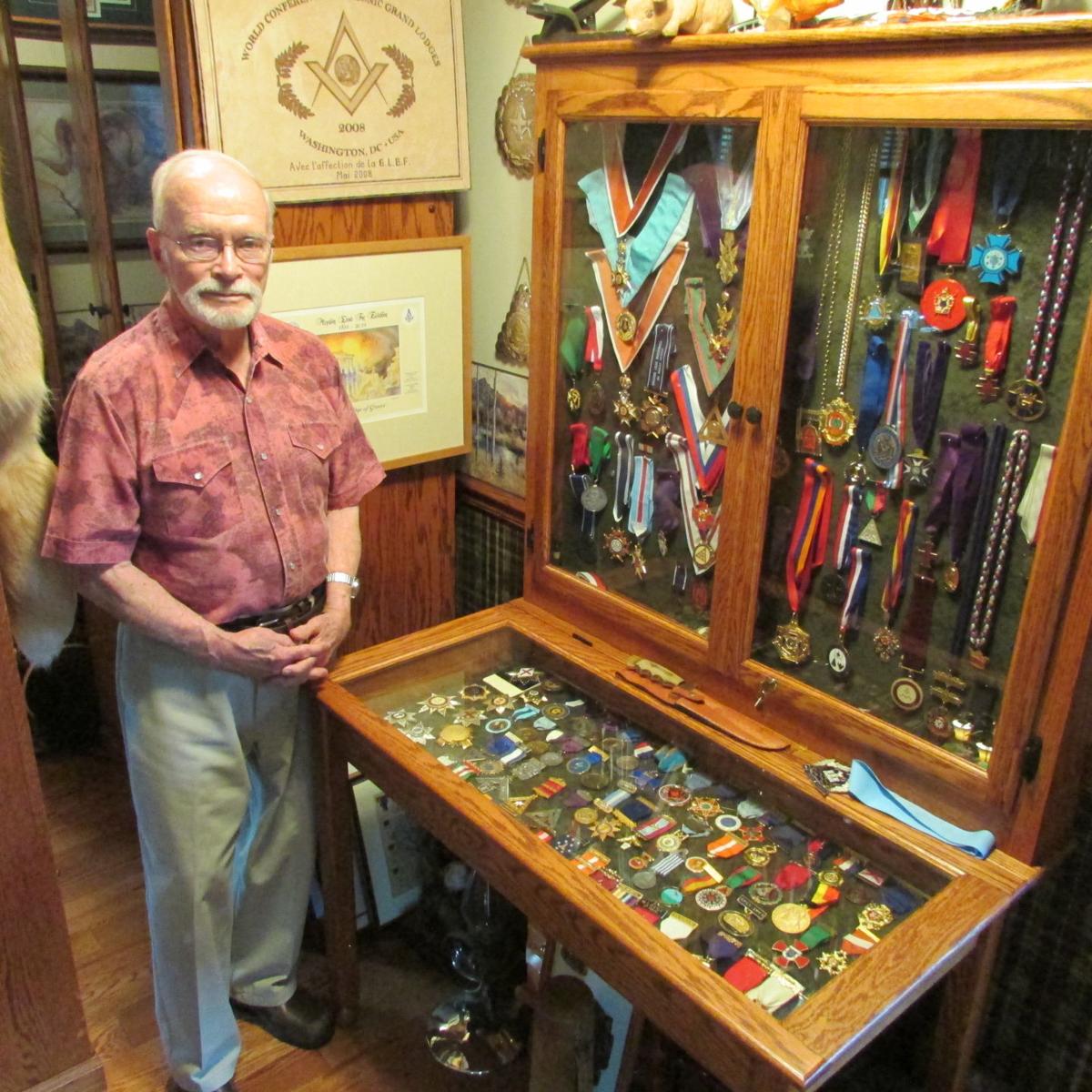 Freemason Thomas W. Jackson stands with just some of the medals given to him over the years as part of his work with the Freemasons. 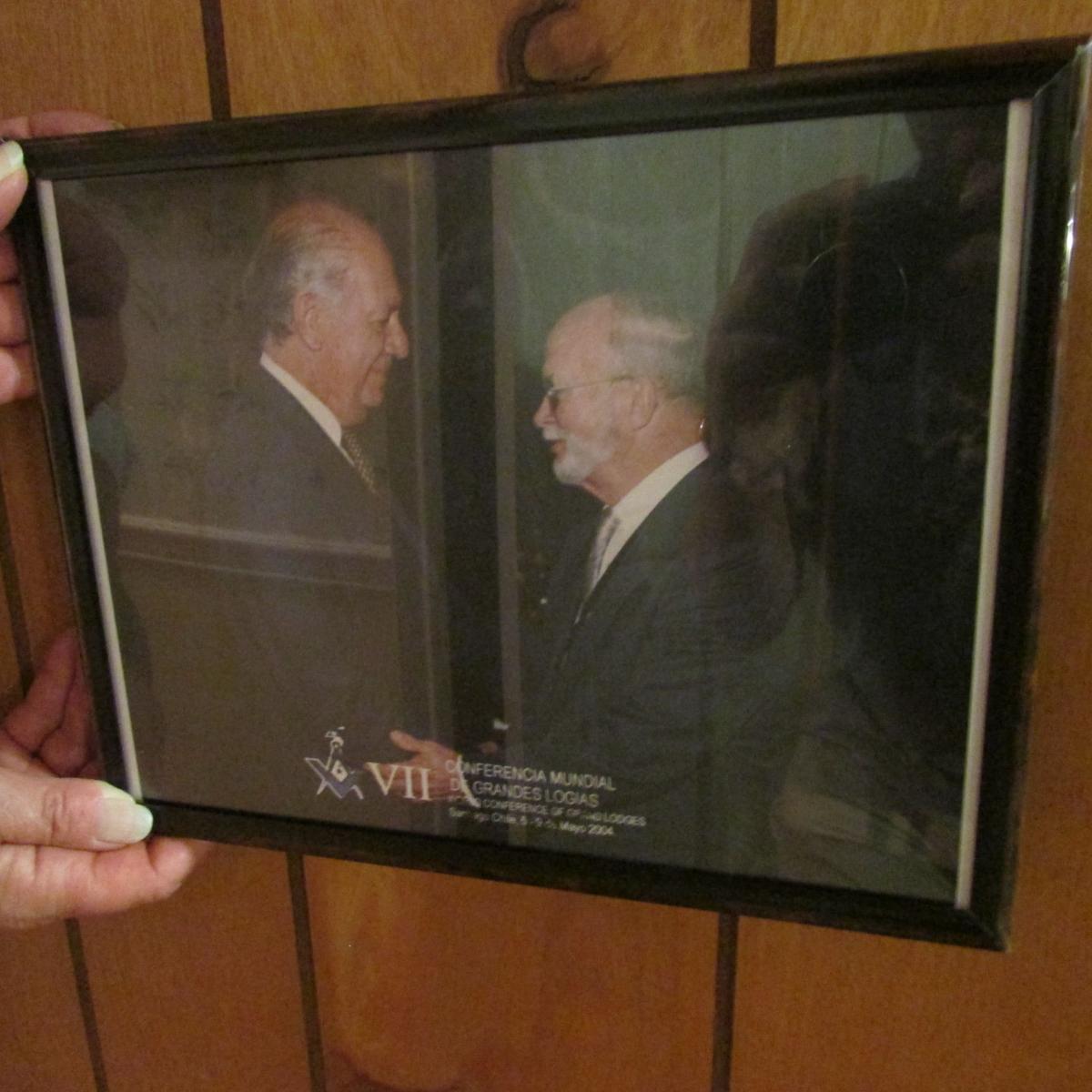 Thomas W. Jackson, right, meets with the then President of Chile Ricardo Lagos in 2004. 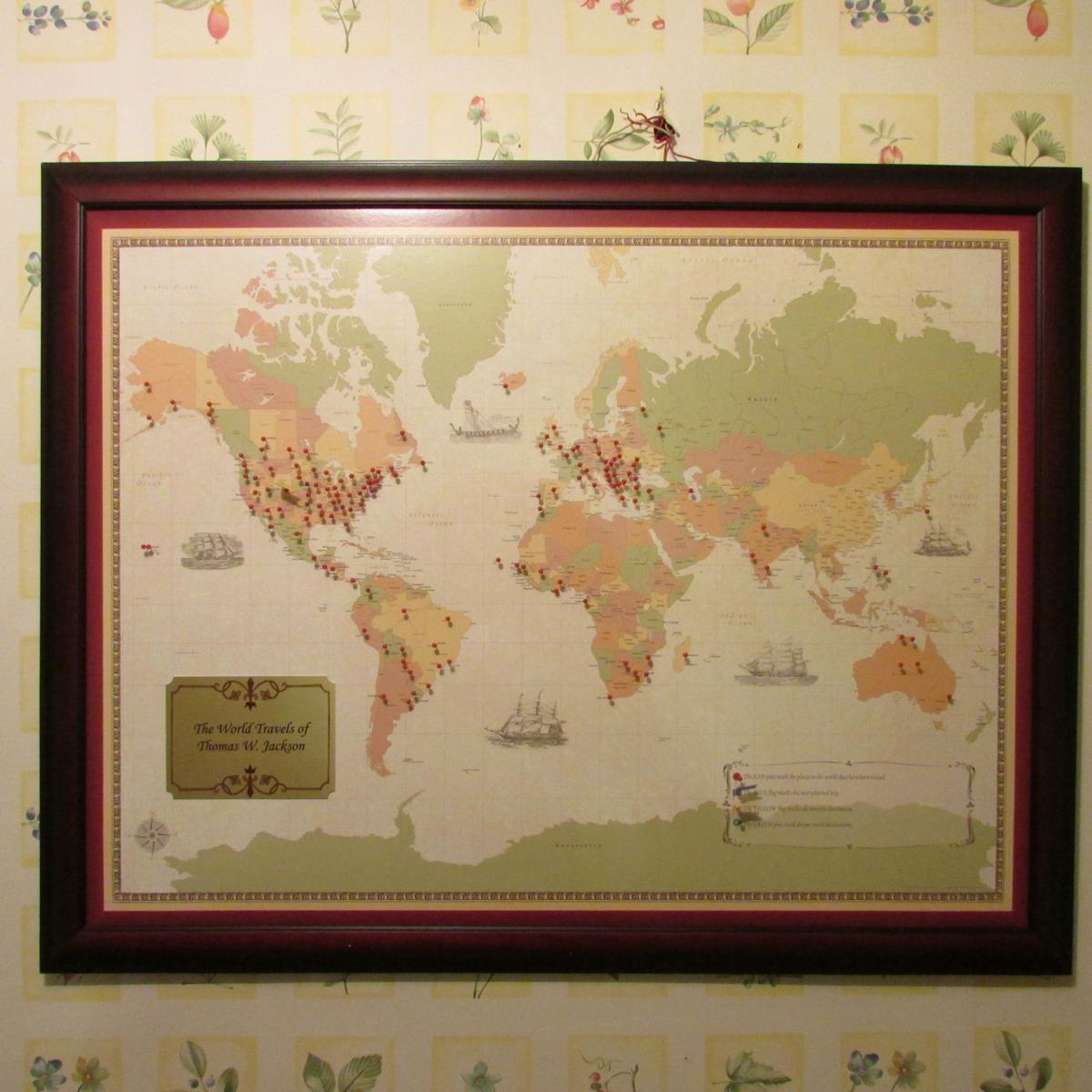 Thomas W. Jackson's wife, Linda, tracks all the countries around the world that her husband visits as part of his travels with the Freemasons. 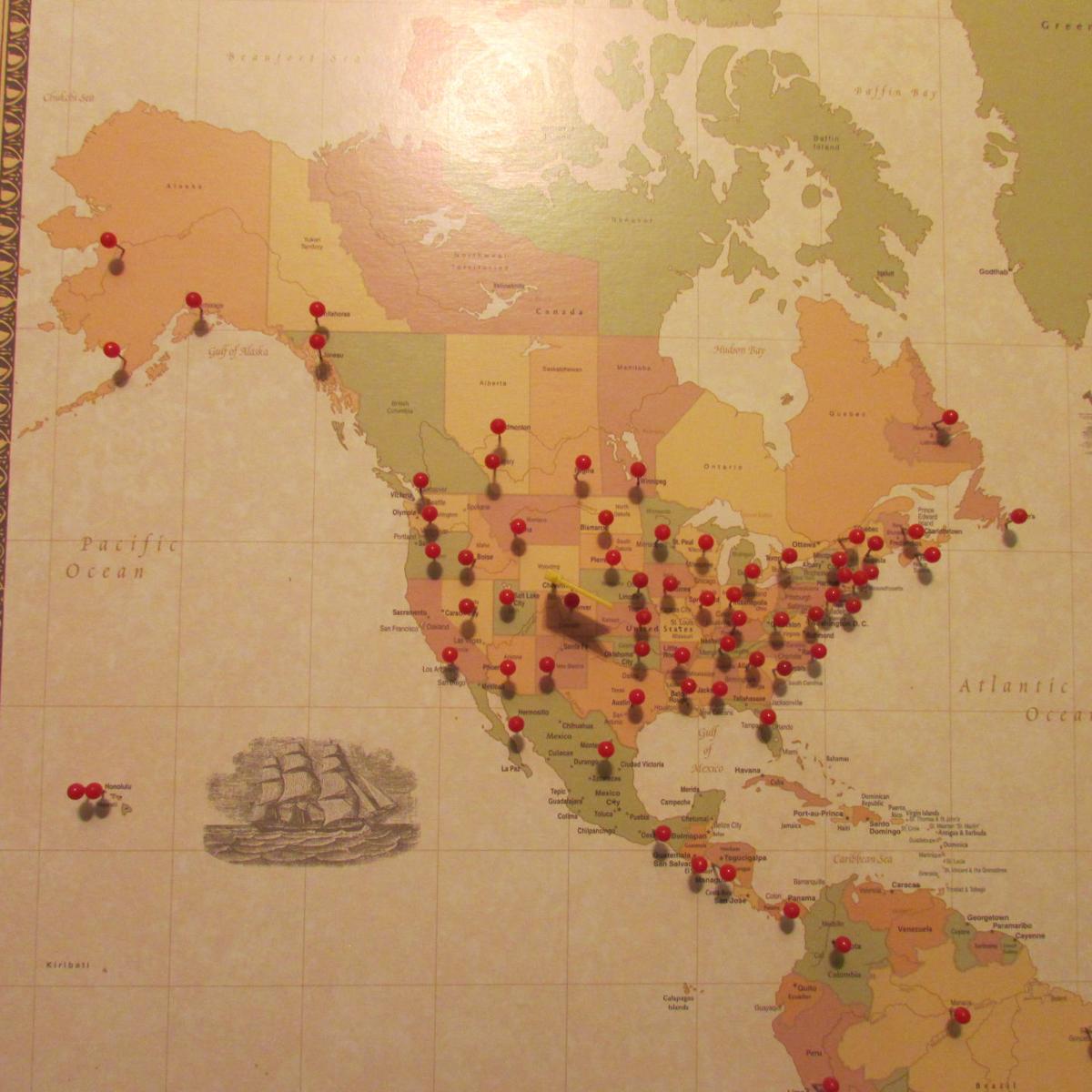 Thomas W. Jackson's wife, Linda, tracks all the U.S. states and countries around the world that her husband visits as part of his travels with the Freemasons.

Freemason Thomas W. Jackson stands with just some of the medals given to him over the years as part of his work with the Freemasons.

Thomas W. Jackson, right, meets with the then President of Chile Ricardo Lagos in 2004.

Thomas W. Jackson's wife, Linda, tracks all the countries around the world that her husband visits as part of his travels with the Freemasons.

Thomas W. Jackson's wife, Linda, tracks all the U.S. states and countries around the world that her husband visits as part of his travels with the Freemasons.

Eminent Freemason Thomas W. Jackson, a Shippensburg native, meets leaders all over the world to see what contributions Freemasonry can make in their developing societies. The 82-year-old shows no signs of stopping, even though he says he is retired.

In an interview with The News-Chronicle on Tuesday at his beautiful farm in the Village of Middle Spring, Jackson discussed the most recent honor bestowed upon him: his likeness will appear on a stamp in Brazil.

“I've been to Brazil about 15 times,” he said. “I'm very active in Freemasonry, and that's the reason I'm generally in Brazil. Although, I do go down and fish in the Amazon once in awhile.”

The avid fisherman and hunter said he's been working for many years in trying to bring Brazilian Freemasonry together.

“There are three different Masonic groups, and although they relate to each other, they don’t acknowledge each other or recognize each other, and I’ve been working for years to get them rectified,” he said.

Jackson had attended a Freemasonry conference in Brazil last month, and on the conference’s last day, June 24, leaders presented him with the stamps as a symbol of their appreciation. On the stamp, it says in Portuguese that it is in recognition of his service in promoting universal Freemasonry.

“I had no idea they were doing this,” he said. “It really surprised me.”

Jackson is known across the globe in Freemasonry circles, a fraternal organization celebrating its 300th anniversary of its formal creation this year. Two rooms in Jackson’s home are filled with an array of medals that have been given to him over the years. Many of the items are in a room that has dozens of mounted animal heads, such as buffalo he hunted in Australia and Botswana.

Framed and signed photographs of well-known figures hang on the walls, along with numerous certificates and documents. He has been given swords, art, hand-carved knives, historic rifles, a guitar, and much more.

Accepting gifts was and still is one of the perks of the job he retired from in 2015. Jackson served for 16 years as the Executive Secretary for the World Conference of Masonic Grand Lodges. He now serves as Honorary President of the World Conference.

When Jackson was elected as the first Executive Secretary for the World Conference, he said he initially didn’t want the position. The hundreds of Grand Masters and Grand Secretaries from around the world voted a second time, and they again voted for him.

Why did he take the position?

“If they wanted me, then I was willing to do it. But I never knew it was going to stretch out 16 years,” he said, with a laugh.

He explained the Executive Secretary was initially just supposed to coordinate and run the world conferences. The conferences are held every 18 months in a different country, for example, the last one was held in May in Madagascar.

“But it evolved into something much more than that, because I’ve spent most of my time just visiting Grand Lodges, mediating disputes, trying to reconcile differences,” he said. “The executive secretary was really to serve the Grand Lodges, but it doesn’t really work out that way. They look to me to be an adviser.”

He said the position took him to many countries. He didn’t know how many countries he has visited, but his wife of more than 50 years, Linda, keeps track by placing red pins on a world map at their home. Jackson noted he has visited all 50 states in the U.S. and all Canadian provinces.

“I'm generally out of the country half the year. I've been to 10 countries so far this year, and quite a few more to go,” he said. “I’ve really been fortunate. I have traveled to much of the world. I’ve been hosted by eight presidents, (and) several prime ministers.”

“In eastern Europe and Africa, they want to meet with me to find out what contributions Freemasonry can make to their developing societies,” he explained. He noted the executive secretary position didn’t have a salary, but his expenses were always covered.

Jackson also said he mediated disputes over the years, such as the three Freemasonry groups in Brazil.

“One thing you’re dealing with, and you can’t avoid it, is ego,” he said. “You get so much power in Freemasonry in the hands of one man, and it really becomes an issue once in awhile.”

He said he has been fortunate to be able to mediate, and the key to the discussions is trying to listen to reason.

Jackson stepped down from the position in 2015, but he still gets calls to travel somewhere to advise on a situation.

“I’m supposed to be retired,” he said, with a laugh. “When I stepped down as executive secretary, I thought now I’ll be able to spend time on my farm. It hasn’t happened yet.

“They still call me too frequently. I'm getting too old for this. In another two months, I’ll be 83. I’m just so tired of traveling and sitting in airports,” he said.

But he continues to travel, and he will likely visit Mexico later this month. His wife, who is about 10 years younger than him, used to travel with him on the trips, but now she typically stays home. She noted he calls her everyday when he’s away.

“I can't keep up with him,” Linda quipped.

They have been married since 1965, and Linda said she is extremely proud of her husband.

“I’m amazed at what all he has done,” she said. She thinks it’s neat he has received numerous gifts “as long as he keeps them in one of those two rooms,” she laughed.

Linda, who is an avid quilter, said she tries to keep a relaxing atmosphere at their Middle Spring home. The nearly 30 acres has beautiful views, with the Middle Spring Creek meandering through the property.

“I bought this farm in 1966,” Jackson explained. “It was an old log home, and we lived in it for nine years, and then I built this one.”

Jackson, who was born in McKeesport, moved to Shippensburg when he was 12 years old. The son of the late Duane Jackson and the late Rose Maley Jackson, his family lived in several places in downtown Shippensburg, including an Earl Street apartment above what is now Orky’s Bar & Grill.

“I grew up in a relatively poor environment,” he said. “Neither of my parents went past eighth grade.”

He said he loved to hunt and fish, and he participated in football, wrestling and weightlifting. He also joined Scouting, eventually becoming an Eagle Scout.

He graduated from Shippensburg High School in 1952, and Shippensburg State Teachers College (now Shippensburg University) in 1958 where he studied biology and chemistry. He then received a Master’s Degree in zoology from Penn State University.

He joined Freemasonry when he was 29 years old, just before getting married. He said he joined the Cumberland Valley Lodge, because he admired the local men who were Freemasons, such as Dr. Alexander Stewart and Arthur Burkhart.

“I saw men who I wanted to be like,” he explained. “It was almost a natural progression for me, because I was active in Scouting. I got into Scouting right away, and when I got into Freemasonry, it was like an extension of Scouting.”

He said the two organizations are similar because they both focus on patriotism, a belief in God, and commitment to the betterment of mankind.

Then in December 1979, he was selected Grand Secretary of Pennsylvania’s Grand Lodge. He and his wife moved to the Valley Forge area, and he worked at the Grand Lodge in downtown Philadelphia.

Jackson likened the Grand Secretary position to a CEO, managing day-to-day responsibilities of the Grand Lodge such as operation of five retirement communities and a children’s home for disadvantaged youth. He served in that position for about 20 years.

They lived in Valley Forge for about 25 years before they purchased the same farm in Middle Spring around 2004.

“I had a chance to move back into the home I built myself; there wasn’t any question about it,” Jackson said. “It is my dream to be back here. I just love the area. I love Shippensburg. It has grown a great deal since I’ve been here and changed a lot.”

He said he never imagined living such an interesting life, full of travel and meetings with dignitaries.

“I said to my wife one time, I came back from a trip, and I said, ‘I have to be one of the luckiest men alive, because people pay for me to do what other people are paying to do,’” he said.

Jackson wrote and published a book a few years ago called “Masonic Perspectives: The Thoughts of a Grand Secretary,” for those interested in learning more about Freemasonry.