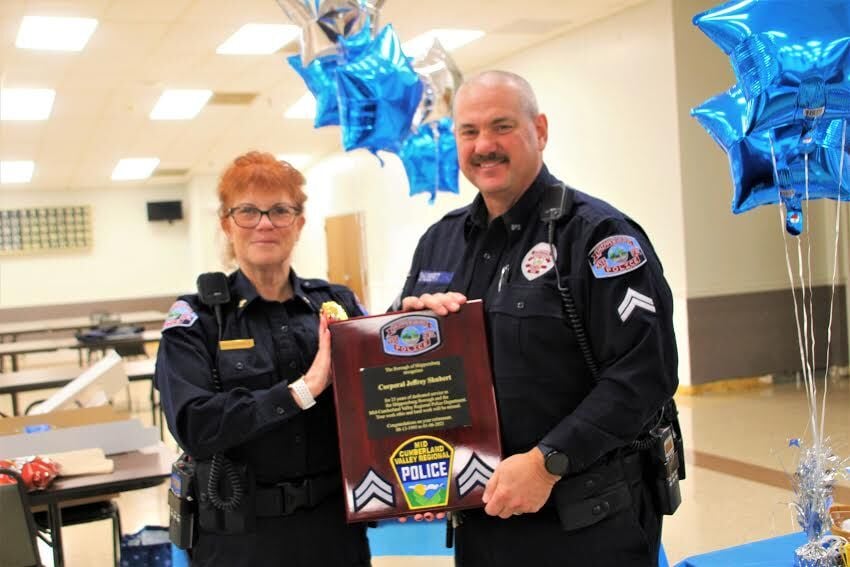 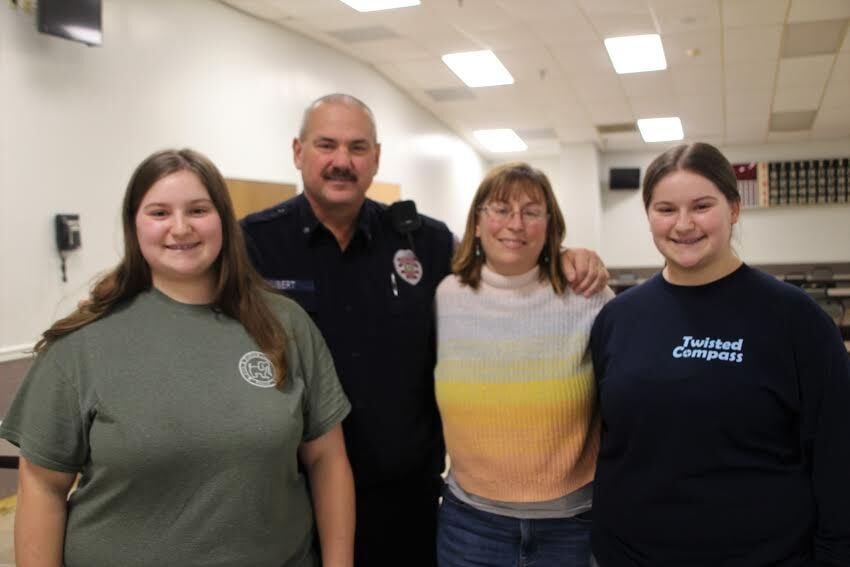 Cpl. Jeff Shubert of the Shippensburg Police Department poses for a photo with his family -- wife, Melody, and twin daughters, Alexandra and Rebecca -- during his recent retirement celebration. 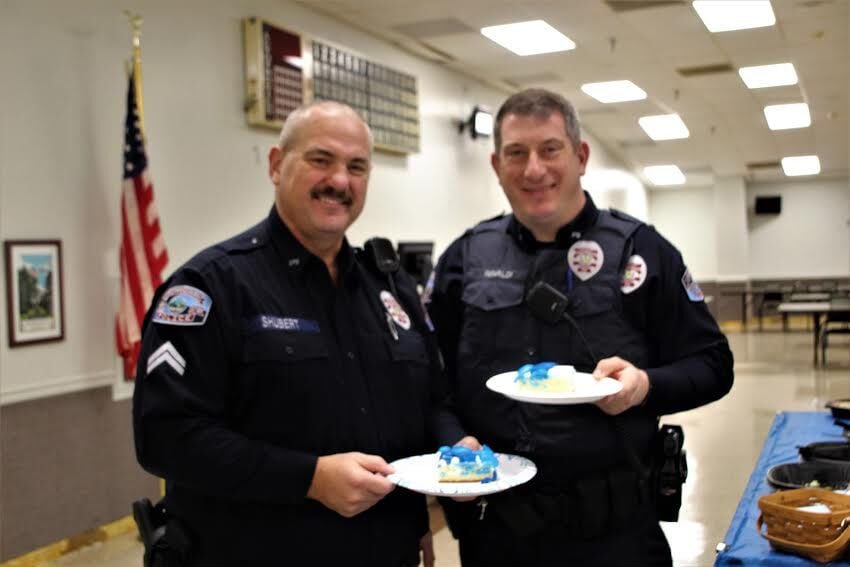 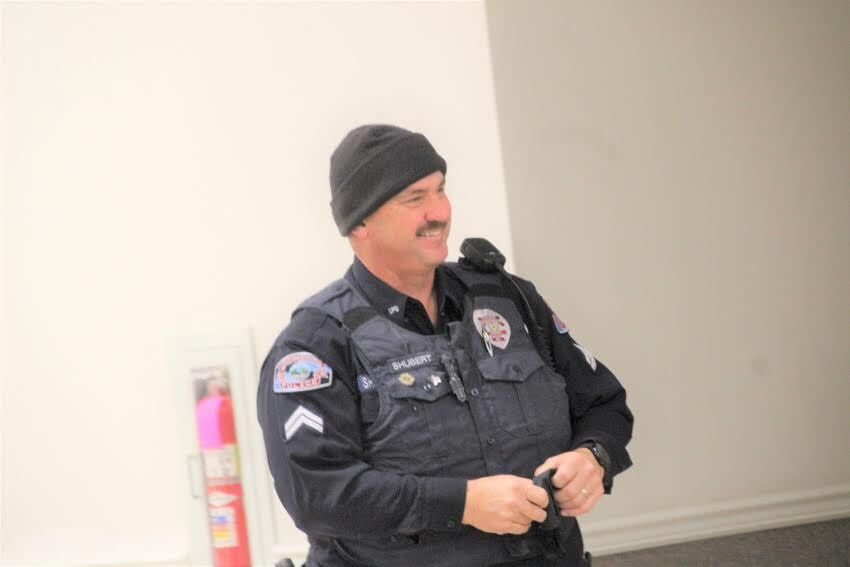 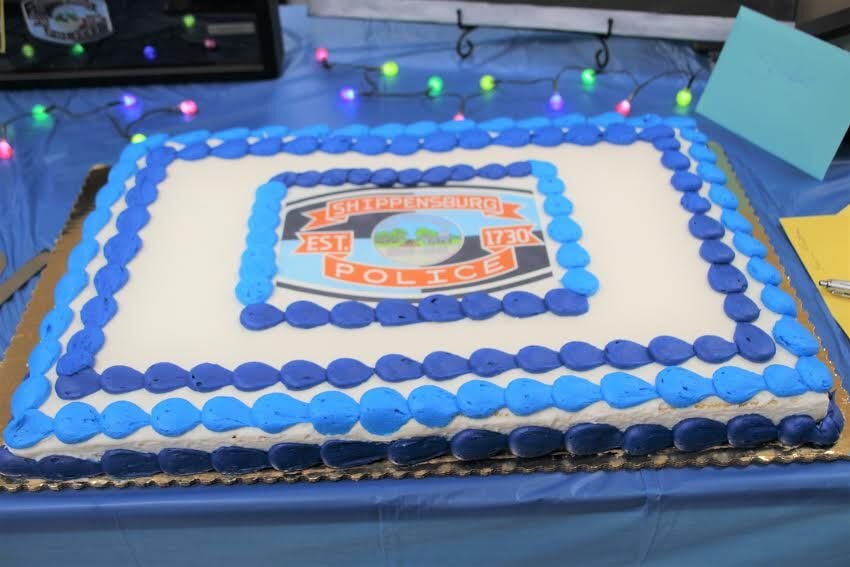 Cpl. Jeff Shubert of the Shippensburg Police Department poses for a photo with his family -- wife, Melody, and twin daughters, Alexandra and Rebecca -- during his recent retirement celebration.

After serving the borough full time for 25 years and part time for two years, he has hung up his borough badge to don a Shippensburg University Police badge.

Shubert quipped, “I was surprised, but still haven’t found the dog. I guess there wasn’t a dog.”

A beautiful cake, shadow box and flag draped one of the tables, with a few others adorned with blue decorations and food and refreshments on another.

Plasterer read a brief statement during the party, “Jeff, on behalf of Borough Council and myself, thank you for your commitment to the police department and citizens of Shippensburg for the past 27 years.”

He then asked Jeff when his last day of work was? Jeff replied, “Tomorrow, Jan. 6.”

Plasterer then said, “Well, today is your last shift, because your shift tomorrow is already covered.”

That made Melody happy, as she noted, “He can run the sweeper in the house tomorrow. I like watching him using the vacuum!”

Dominick then asked Shubert to come forward. She presented him a wooden plaque with two department patches, corporal stripes, and wording for his service to the department.

Dominick said, “I love Shippensburg. My fondest memory of Shubert is he was the first person I met when I started here at Shippensburg. He showed me around the station and the area. That meant a lot to me. I’m very grateful for what you have done for the department.”

Fondly known as “Shubie” by his fellow officers, many shared memories with him. However, most could not be printed.

Two recent retirees, Robert Van Scyoc and Lee Kauffman, did share some of their thoughts on Shubert that could be published.

Van Scyoc said, “I was his sergeant, and it didn’t matter what type of call we answered, he was always very calm and performed his job as a police officer very well. I wish him well with his future.”

Kauffman said, “Shubie was very helpful to me and a good partner to work with. I knew nothing about computers, but if I had a problem, I could call anytime for help and he was there for me in person or on the phone.”

Shubert added, “I have many memories over the years. Three of the most memorable are teaching 25 years of the D.A.R.E. program, allowing my students to meet my dog Sam. Teaching my twin daughters was really a highlight in the program, and delivering one baby with the assistance of Officer Garcia.”

Shubert said, “My plans were to go back to the Franklin County 911 Center, however some things change, I now will continue my future in law enforcement and begin working with the Shippensburg University Police Department on Jan. 9. I guess I can’t stay away from law enforcement, close one chapter and open another.”

Shubert attends the Prince Street Church, coaches girls softball, loves trains, plays the guitar and spends as much time with his family as he can.

Denny Clopper of Shippensburg has worked alongside Shubert for several years.

“I have had the pleasure of knowing Jeff for many years. I worked with him at the 911 Center on the 11-to-7 shift, dispatching Fire, Police and EMS. He enjoyed being there when people were in need of emergency help,” Clopper said. “We had a lot of fun together and did some crazy things while working. He always had an interest in the emergency services field. I will still continue to see him around since he is still here in Shippensburg.  A great job by Connie Murphy on the planning and designing of the celebration, and to those that were also involved.”

Town Hall Meeting The Borough of Shippensburg, Borough Council will