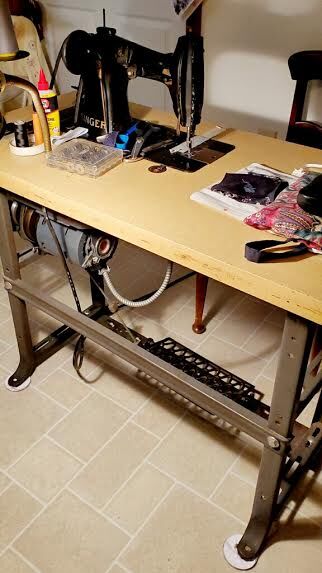 Kate Bigler still uses an old Singer sewing machine from one of the factories in Shippensburg. The machine, which is well over 80 years old, was an old treadle-style machine upgraded for Bigler by her brother, Clyde Rotz.

This August of 1968 photo shows the many employees of the U-Wanna-Wash Frocks factory in Shippensburg. 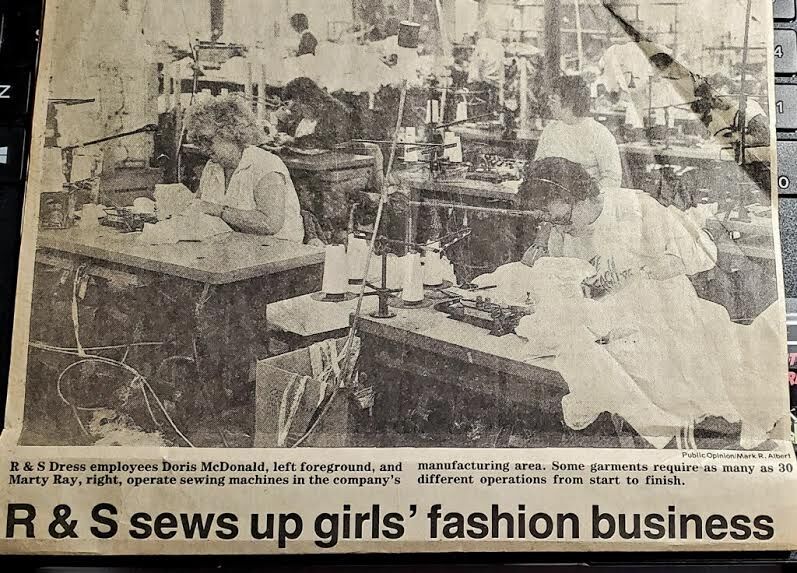 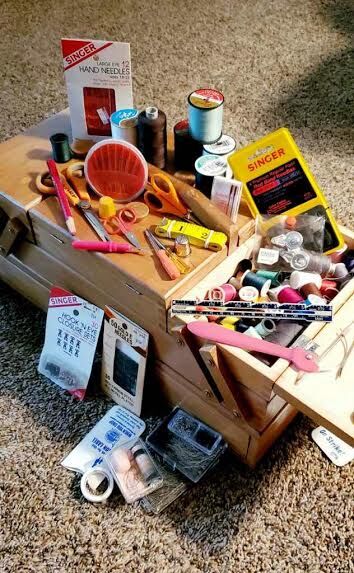 Tools of the trade including Singer sewing needles, nippers, measuring tapes, thread, red marking pencils, small sewing machine screwdrivers and all sorts of other sewing notions were a staple in my mothers sewing box that she used while working in the sewing factories in Shippensburg. I inherited her sewing box when she passed away in 2017.

Kate Bigler still uses an old Singer sewing machine from one of the factories in Shippensburg. The machine, which is well over 80 years old, was an old treadle-style machine upgraded for Bigler by her brother, Clyde Rotz.

This August of 1968 photo shows the many employees of the U-Wanna-Wash Frocks factory in Shippensburg.

Tools of the trade including Singer sewing needles, nippers, measuring tapes, thread, red marking pencils, small sewing machine screwdrivers and all sorts of other sewing notions were a staple in my mothers sewing box that she used while working in the sewing factories in Shippensburg. I inherited her sewing box when she passed away in 2017.

Editor’s Note: This is the second in a three-part series that highlights the many sewing factories that once called Shippensburg home, and the people who worked in them. The first part is published in the Feb. 11 edition.

In last week’s offering of A Blast from the Past, I provided an overview of the numerous sewing factories that once graced the landscape in Shippensburg. Several of the old buildings have found a new purpose, while others have disappeared altogether.

As promised at the close of Part 1, here are just a few of the many comments, stories and memories shared with me about some of the everyday happenings that took place on the factory floor, under the presser foot and around the bobbin.

I was first inspired to write about the sewing factories after going through the countless number of items in my mother’s sewing box that I inherited when she passed away in 2017.

I was always impressed by the fact that my mother could make the needle of her sewing machine sail through a piece of fabric like a bird takes to a blue sky on a summer afternoon. The revving of the machine’s motor and the sound of the presser foot moving along the material when she pushed the pedal to the floor was music to her ears. What I never really paid much attention to were all of the sewing notions she kept handy in the box beside her machine. Honestly, it was just something that didn’t appeal to me. Sewing is an acquired skill and some of us have it, and some of us don’t. I was one that just didn’t have it…but, my mother, and so many others just like her, did!

Kate Rotz Bigler was one of those ladies who had it, and still has it, though she didn’t start out that way!

Bigler began her long sewing career at U-Wanna-Wash Frocks when she was a mere 18 years old. In fact, her mother was already working at the factory located at the corner of Garfield and Fayette streets.

“I’ll never forget what the hiring manager said to me when I first applied for the job,” Bigler laughed. “He asked me if I had any experience and I said no. ‘No experience, no job,’ he stated! I said, ‘Well, how do you expect me to get any experience if you don’t teach me?’ He looked at me and said, ‘Come back Monday and you can start!’ I went to work the following Monday and took a seat at the machine next to my mother.”

The elder Mrs. Rotz was in her early 50s when her daughter began honing her sewing skills, but as Bigler said, it didn’t happen overnight!

“I had no idea how to sew; I didn’t know the first thing about it,” she laughed. “I made mistakes along the way, but I kept learning and then I’d be switched from one job to another, and before I knew it, I had learned to sew and do all kinds of things!”

She said women didn’t have just one job in the factory, they were cross-trained to do a variety of jobs, that way there was always someone to fill any position.

Kate’s salary was 75 cents an hour when she started at U-Wanna-Wash Frocks in 1954 -- a decent wage for factory piece-rate workers back then. However, as was common among women in those days, Bigler left the factor when she learned from her sister-in-law that she could make more money working at L’Aiglon. She started out setting sleeves and quickly moved onto the sample department. She sharpened her skills in a number of different departments at different factories over the years, learning nearly every aspect of making dresses, blouses, pants and whatever other garment was put in front of her. While she was happy with the money she was making, Bigler said after she paid the babysitter and bought groceries, she was broke again!

Many of the hundreds of comments and memories shared with me talked about working at L’Aiglon, ShirtCraft Co., U-Wanna-Wash Frocks, Netti Frocks, Orweco Frocks and The Greif Co. Some of the memories and comments shared included:

“I was 16 years old, then, but I also worked at Greif. It wasn’t called Greif when I first started; the name changed many times over the course of several years.”

“My Aunt, Velva Railing, worked at Netti Frocks for many years,” Gerry Flory noted. Carolyn J. Farrell said her mother, Mabel Hafer, worked at L’Aiglon, and she loved the sample-sized dresses that her mother would occasionally purchase and bring home to her.

Dick Eschenmann shared that his grandmother, Sylvie Sprecher Rockwell, worked at some o f these factories, but he wasn’t sure which ones in particular. “However, when she got married, the woman she worked with gave her a table made out of the spools from the factory. It’s a cool looking table that I still have in my house. This was more than half a century ago.”

Erin Richardson said she worked at Orweco Frocks right out of high school. “It was the hardest job I ever had, but it taught me self-discipline and excellent work ethic!”

Cynthia Maley noted that her dad was a dress cutter/pattern cutter, and her mom stitched for a short time at one of the factories. “My favorite was a dress that had the Flintstones on the arms.”

I also received several phone calls and talked with others who shared information with me about additional factories in Shippensburg and some of their origins.

Charles Shannon shared that U-Wanna-Wash Frocks actually started in the SWID Brothers building across from H&H Chevrolet. He said he went to work there in 1958 because he wasn’t old enough to work anywhere else in Shippensburg at the time.

“I applied at Domestic Pump, but was told I wasn’t old enough to work there,” Shannon recalled. “ I went and applied at U-Wanna-Wash Frocks because I needed a job and back then you could get a job working at any of the sewing factories; you didn’t have to be 18.”

He said he and his wife, Mildred, worked there, as well as her mother, Ruth Kling, and two or three of her aunts. He wasn’t sure how long U-Wanna-Wash Frocks operated out of this building before they moved to the Garfield and Fayette streets location.

Bigler also shared with me that her brother, Clyde, and Frank Gallo opened another factory in Shippensburg, Monarch Clothing. Clyde was a machinist at the factories back then, but was also one of the bosses. He and Frank opened the factory in the building across from Pizza Hut. They had the shop for five years before it closed.

Mona Holtry from Newburg said her mother, Mabel Garman, also worked at Monarch Clothing, as well as L’Aiglon before that. Mona also worked at U-Wanna-Wash Frocks in Newville for two years.

R&S Dress Factory was another popular factory in Shippensburg. Owned and operated by Bob Rhine and Fred Stouffer, the small factory started in 1969 with only 12 machines and a handful of workers on North Queen Street. In a newspaper article shared with me by John Rhine, Bob’s son, it shows Jim

Weibley receiving a gold watch from Bob upon his retirement. Weibley, 62 at the time, was one of the first employees of R&S Dress Manufacturing when it opened its doors. On that particular day, Weibley, some 18 years later, was the first to retire from R&S Dress Manufacturing. It’s noted in the article that Weibley actually started in the manufacturing business at the former ShirtCraft plant on Lurgan Avenue, which eventually became L’Aiglon Apparel, and from there he moved on to R&S Dress Factory.

The sewing factories were a starting place for generations of workers in Shippensburg. It was also a place where folks like Bigler and many others learned skills that they would use throughout their lives.

“Working in the factory taught me a good work ethic, which I also learned from my mother, but it also taught me how to manage my money and how to be frugal,” Bigler admits. “Learning to sew also saved me a lot of money over the years, especially when my kids were little, and even when they grew up and got married. I made all of my girls’ clothes while they were growing up, and a lot of my boys’ shirts. Not all of them, but a lot of them. I also made the bridesmaids’ dresses and things for one of my daughter’s weddings. If I hadn’t learned how to sew, I would never have been able to do that.”

She continues to sew today, even at 85 years old. She uses an old Singer treadle machine that was once used in the factories. She said the machine is over 80 years old and still runs like a dream!

“My brother, Clyde, put a motor on the machine and added a light so I could see to sew, and I love it,” she noted. She doesn’t sew as much or in volume like she used to, but she loves to make towels and other decorative items, as well as doing hemming and other alterations for her family.

Stay tuned next week for the finale, Part 3 of Sewing Factories in Shippensburg where I’ll share more memories and photos of an art and era long erased from Shippensburg’s landscape, but an industry that helped to put Shippensburg on the map, one seam at a time!