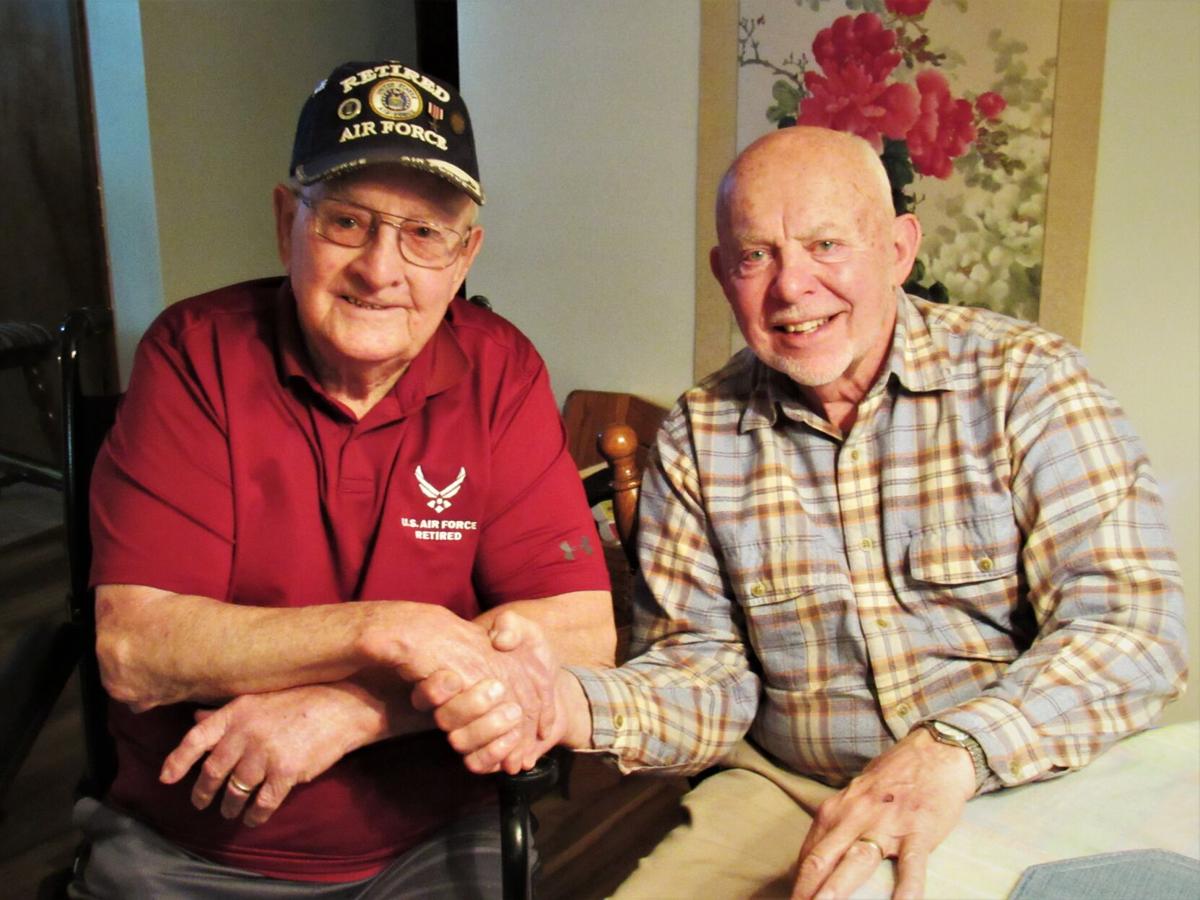 Jay K. Perry of Shippensburg (left) and Coleman L. Toth reconnected last Friday after losing touch for 52 years. Perry and Toth were in the U.S. Air Force, stationed in Plattsburgh, New York, in 1962, and lost touch two years later until last Wednesday when Toth visited Perry at his home. 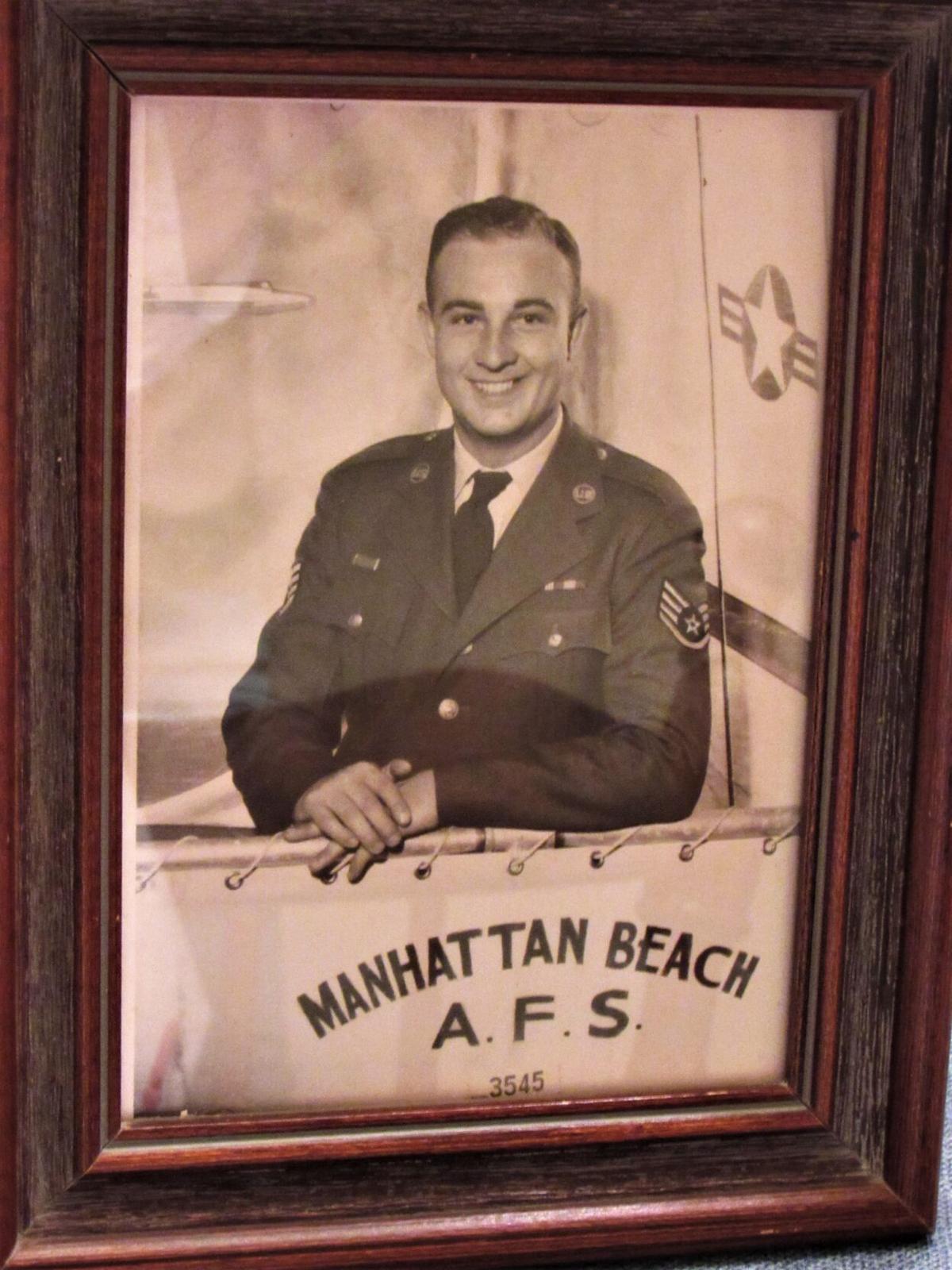 Jay L. Perry of Shippensburg is pictured in 1956. Perry served in the U.S. Air Force with Coleman L. Toth in 1962 for two years and they lost touch for 52 years. They reunited last Wednesday at Perry’s home.

Jay K. Perry of Shippensburg (left) and Coleman L. Toth reconnected last Friday after losing touch for 52 years. Perry and Toth were in the U.S. Air Force, stationed in Plattsburgh, New York, in 1962, and lost touch two years later until last Wednesday when Toth visited Perry at his home.

Jay L. Perry of Shippensburg is pictured in 1956. Perry served in the U.S. Air Force with Coleman L. Toth in 1962 for two years and they lost touch for 52 years. They reunited last Wednesday at Perry’s home.

One simple internet search led to a sweet, although long-awaited 52-year reunion.

Jay K. Perry and Coleman L. Toth met in the U.S. Air Force in 1962 and served together for two years while they were stationed in Plattsburgh, New York.

Perry began his journey with the U.S. Air Force on July 13, 1951, as an assistant fire chief with the crash and rescue crew, and retired in August of 1982.

“I always wanted to go in the military and do my job,” he said. “It was during the Korean War, and I was 17 years old, but I turned 18 in December, and I knew I was probably going to be drafted. I wanted to go into either the Navy or the Air Force and wound up going into the Air Force.”

Toth currently lives in Harrisburg and Perry resides in Shippensburg.

“I had come up there as a young airman in the second class and a newly trained fireman,” he said. “At that time, I was called a hand lineman Air Force firefighter on the crew that Jay was assistant fire chief for. He was responsible for the whole department, and I was responsible for my truck. What was more impressive for me as a young airman is how Jay took me under his arm as an individual. He and his wife, and his older children, took me and my wife on. Jay and his wife were more meaningful to me and my wife in an environment like that. Our personal friendship and our personal acquaintance today, I think, is based on that initial camaraderie. I had the high regard of respect for him as our assistant fire chief and, in turn, he had just as much respect for me as a worker in the fire station.”

Perry explained how he was able to track Toth down after so many years.

“I have this device called a ‘GrandPad,’” he said. “I got it for Christmas a couple years ago. I went on the internet and I typed in his name, and his father’s obituary came up. I saw ‘Coleman L. Toth,’ and for some reason the contact information for his son out in Omaha was listed. I called his son, Chris, and asked if his father’s name is Coleman. I told him my name and that we were stationed together at Plattsburgh, New York, and Chris gave me his father’s phone number.

Perry described an experience during his service that he is glad to be proud of.

“I directed a firefighter helicopter into a rescue for a Vietnamese boy who was in a minefield,” he said. “I called the tower and they sent the helicopter down there. They lowered a basket down and put him in there. I was out in the field with him and he seemed to understand English, and I told him they were going to take good care of him and take him to the hospital. He was about 5 to 7 years old and was injured, but he wasn’t crying or anything.”

“I had a good career and I do miss the people,” he added. “Some of it was pretty hazardous, but I enjoyed my job and did the best I could. I’d do it all over again. I got a Bronze Star out of it.”

“What I’m most proud of in my service career is getting to know the people you learn to serve with,” said Toth. “They’re like extended family. I was so involved at the end of my career of working with my family and the growing up of our children. During your career, you’re raising them and after your career, your family suddenly becomes young adults. I was so busy with my three young adults after I got out of the Air Force that my focus was really taken up with them in all of their activities, and because of that, for the next four years, I didn’t have time to miss anything. My experience after 21 years in the military was changed with the experience of my family that has grown up.”

After the Air Force, they both worked as civilians in different fields.

“I didn’t do a whole lot,” Perry said. “I took a job with Boscov’s Department Store as a carrier. I carried merchandise between Reading, Camp Hill and Dover, Delaware. I would pick up items to take to other stores. There were different sized clothing that other stores would need, and I would take them there. I did that for about 10 years just to have something to do.”

Toth said, “I went into the U.S. Postal Service for 22 years. After my Postal Service career, I took a break and I have been enjoying spending time with the grandchildren. I now have become a Lyft driver. I’ve been doing that part-time for two years. It’s been an enjoyable experience for me. It’s really amazing because I make my own hours. To be a Lyft driver, you have to enjoy interacting with the people and I enjoy the people.”

After five decades, Perry and Toth are happy to have had the chance to reconnect. They spent the day together, enjoying lunch at the Greenvillage Drive-In Restaurant off of U.S. 11, and catching up on old times.

“We got to be good friends and went hunting together,” Perry said. “I’m glad we got together. We had many good times together back then. He’s a good friend and that’s why I wanted to get in touch with him.”

“What is so remarkable about this reunion is that since we met and worked together for two years, 52 years later we’re sitting here catching up,” said Toth. “I moved to a different assignment, and in my 20 years I was in all these different places and he did his different things. We were never able to make contact because we had our careers and lives, and 52 years later I got a call from him. When I moved back to Harrisburg, I thought that I got to find out if Jay K. Perry is still alive because I found out he was from Shippensburg. I never took the effort to find out and I guess that’s because I’d be afraid to find out if he would not be here anymore. But, I got a call from him and here we are.”