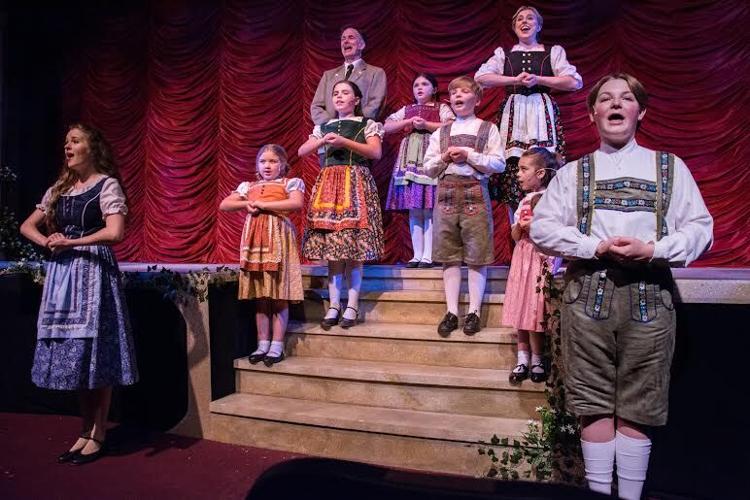 The von Trapp family sings ‘So Long, Farewell,’ during Totem Pole Playhouse’s production of ‘The Sound of Music.’ The show runs through July 3. 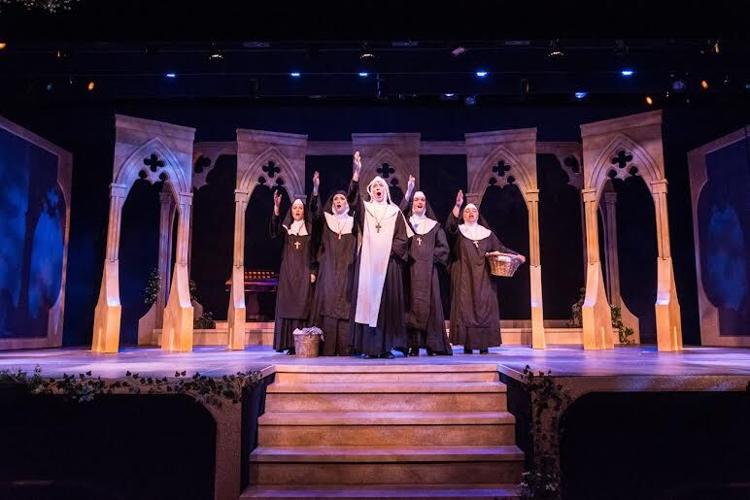 The sisters of the Nonnberg Abbey perform during Totem Pole Playhouse’s ‘Sound of Music.’

The von Trapp family sings ‘So Long, Farewell,’ during Totem Pole Playhouse’s production of ‘The Sound of Music.’ The show runs through July 3.

The sisters of the Nonnberg Abbey perform during Totem Pole Playhouse’s ‘Sound of Music.’

The hills near Caledonia really are alive with The Sound of Music as an incredible cast delivers an unforgettable show for the whole family.

Follow Maria (Natalie Szczerba) on her journey from the Abbey to the home of the von Trapps – the stern Captain von Trapp (Ken Griggs) and his seven children – Liesl (Amber Emerson), Friedrich (Jasper Wakefield), Louisa (Cadence Roll), Kurt (Adam Sweeney), Brigitta (Mya Camacho), Marta (Layla Camacho) and Gretl (Annabelle Deinlein). As she wrestles with her devotion to God and Mother Abbess (Elisabeth Turchi), and her feelings for Captain von Trapp, Maria takes the audience on a journey of love and acceptance, coupled with the fun-loving von Trapp children and some pretty powerful vocals.

The 2 ½-hour production creatively weaves the audience into many of the scenes, with the cast often walking or running up and down the middle aisle.

The show runs through July 3 at Totem Pole Playhouse, located in Caledonia State Park between Chambersburg and Gettysburg. Showtimes are 8 p.m. tonight, 2 and 8 p.m. Saturday, and 2 p.m. Sunday. For tickets, go to: www.totempoleplayhouse.org.

Direction and Design for “The Sound of Music” are:

Bonita Cockley, 90, of Chambersburg has attended Totem Pole every year since the first theater opened 70 years ago.

“They did a fabulous job!” she said of “The Sound of Music.”

She said she has seen the production at least six other times, and said Totem Pole’s is outstanding. “I hope more people attend!”

Cockley added she particularly enjoyed Maria and the children in the production.

Sharon McCarty of Fayetteville said she thought the production was wonderful.

“I’ve loved ‘The Sound of Music’ since I saw it the year I graduated in 1965,” she added. “The vocals were outstanding, particularly the Reverend Mother (Turchi). But, they all had great voices.”

McCarty’s friend, Beverly Cooper of Fayetteville, agreed the cast has some amazing vocals and talent. She added that Totem Pole is a nice theater and it gives the local community the arts in the area.

Annabelle said she really had fun playing Gretl, and loves when they all sing, “So Long, Farewell.”

Cadence, who plays Luisa, said she really enjoys the communication of the cast, which is helping her to build her career in acting.

Brooklyn, who plays Sister Sophia, said she has loved the theater since she was younger, and the cast always has fun backstage.

“The older cast members are nice to me, too. I like the cast itself!”

The Roll family lives in Florida, but are visiting their grandparents for the summer to perform in this show and their mother Christi will perform in the playhouse’s next offering, “Beehive.”

Brooklyn said one challenge she had with Sister Sophia was singing in a lower voice than her normal soprano. Their mom, Christi, said this has helped Brooklyn improve on her range.

Cadence added her favorite part is also singing “So Long, Farewell,” plus the fun choreography by Director Luke Reed.

The Roll sisters agree that Totem Pole is a wonderful theater with amazing shows.

“All of the actors make it amazing,” Cadence added.

Their grandmother, Cindy Knauer, has attended shows at Totem Pole since she was a young girl.

“We love the show! Our granddaughters are up there!” their grandfather, Davis Knauer added.

Christi said she enjoys the direction, and how the audience is involved in the show.

She added that Artistic Director David Hemsley Caldwell is doing a great job and is so kind to everyone.

Reed said it has been a joy to direct such a grand show in the community.

“This is such a treasured classic,” he said. “It’s about literally singing in the face of evil. I hope the audiences find courage, hope and joy in that. Sometimes there’s power in just singing, no matter what that means to you.”

He added some of the best scenes for him to watch are any with Maria and the children.

“They are such a joy to be around, and they are so excited to be here, and that resonates with all of us,” he added.

Bailey said she has worked with Reed for almost five years, and she felt confident in coming to Totem Pole knowing he brought that same level of professionalism to the high school level.

“Everyone is so amazing here, and that also helped make this experience better for me. I also think this is a great show for my first production here; it’s a classic.”

She is especially excited to work with Turchi, who is her singing role model.

“We have amazing musical direction, as well,” she said. “The Latin was the hardest part, but it got easier after spending hours on it.”

Bailey hopes audiences get a joyful experience from the show.

The Camacho sisters of Shippensburg are very excited to be in their first musical.

“Everyone here is so kind,” Mya added. “We made a lot of friends here.”

Layla agreed they are one big, happy family!