Former Greyhound Football player Gary Wyrick, Class of 1960, is proud to still be wearing his Varsity Lettermans Jacket after all these years. He has attended almost every Homecoming football game since he graduated, and will be attending this week’s game as well.

Gary Wyrick, Shippensburg Class of 1960, shows off his Varsity Letterman Jacket earned while playing Greyhound Football. He has attended most of the Homecoming games since he graduated, and will attend this week’s game. 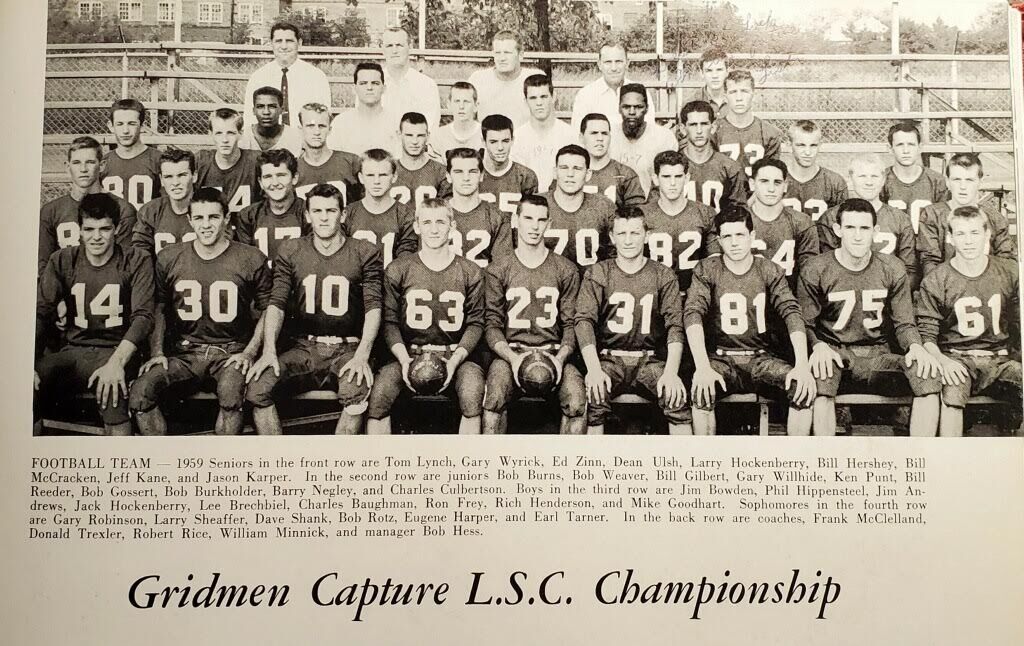 New head coach William Minnick explains strategy to senior members of the Greyhound football team during a pre-game skull session in the Greyhound locker room from the 1960 yearbook.

Former Greyhound Football player Gary Wyrick, Class of 1960, is proud to still be wearing his Varsity Lettermans Jacket after all these years. He has attended almost every Homecoming football game since he graduated, and will be attending this week’s game as well.

Gary Wyrick, Shippensburg Class of 1960, shows off his Varsity Letterman Jacket earned while playing Greyhound Football. He has attended most of the Homecoming games since he graduated, and will attend this week’s game.

New head coach William Minnick explains strategy to senior members of the Greyhound football team during a pre-game skull session in the Greyhound locker room from the 1960 yearbook.

Football season is in full swing, and our beloved Greyhounds with an awesome 6-0 record are riding a huge wave of confidence as they prepare for this week’s matchup against the Northern Polar Bears, who have an impressive 4-1 record of their own.

When the Greyhounds make their entrance onto the field inside Veterans Stadium Friday night there will be a different, but familiar spirit in the air thanks to the anticipation and excitement of Homecoming. Always one of ‘the’ biggest games of the year, Homecoming is a special time of year when hundreds of Shippensburg alumni return to their old playing field to cheer on a new generation of Greyhounds.

The game is sure to be a thriller with the impressive record the current team boasts, one to conjure up the fighting spirit for many of the older generation Greyhounds in attendance.

One of those older generation players who can’t wait for Friday night’s game is Gary Wyrick, a Shippensburg native who has fond memories of his high school playing days.

Wyrick has only missed a handful of Homecoming games since he graduated in 1960, and he still wears his varsity jacket to each game, a jacket that holds a lot of memories for the former tackle.

“We were the first class to have varsity jackets, and you couldn’t get a jacket until you earned a varsity letter and you didn’t receive your jacket until your senior year, which was a big thing 60 years ago,” Wyrick said.

Wyrick was a two-sport athlete, having lettered in both football and basketball, so earning the right to sport a varsity jacket back then was definitely a rite of passage for Wyrick and his fellow teammates and friends. Being able to wear the jacket was one thing, but earning the jacket was quite another, as Wyrick recalled.

“We had a tough year my senior year of high school, and we weren’t expected to win very many games, let alone play in the championship game, and win; but that’s exactly what we did,” Wyrick exclaimed.

The excitement was evident in Wyrick’s voice as he recalled the big game. Though, there was one thing missing … the reference to Homecoming. His yearbook indicated that back then, it was referred to as “Color Day.”

“Yeah, that’s right! It was called Color Day back then. No wonder we couldn’t find anything about Homecoming,” he laughed.

“Instead, we handed them their helmets in a 32-0 trouncing of our own!”

The story in Wyrick’s 1960 yearbook reads:

“The Greyhounds sent a starting team on the gridiron in ‘59 with only one player who had started every game the previous season. Despite the lack of experience, the determined Hounds and their completely new coaching staff captured the Lower Susquehanna Conference Championship for the second consecutive year! The turning point of the season came with the Juniata Joint game. The highly touted Indians came to the game favored to trounce the Hounds, but the G-men came onto the field with a do or die effort and completely stymied the opposition. The student body waged a fast and furious week of Color Day Festivities, preceding the Juniata game, which was climaxed with a parade and bonfire, hampered only by a continuous deluge of rain. The team, backed by this surge of spirit, took another look at the statistics and decided they weren’t finished yet. When the final tallies were completed, the team, under new head coach William Minnick and his assistants, Robert Rice, Ron Traxler, and Frank McClelland, had compiled the following record-once again disproving the skeptics when they said, ‘It couldn’t be done..’”

Wyrick said it was an awesome game that in the beginning of the season no one expected them to win, “but we never gave up, and we practiced hard and a little differently back then,” alluding to the strategy that he feels helped them win the game. “They (Juniata Joint) had this big 220-pound running back named Dale Smith, and it was said that we wouldn’t be able to stop him. Well the entire week of practice leading up to the game, our coaches dressed out in gear and ran running plays all week where we had to tackle them! Coaches today would never be able to get away with doing something like that, but back then, our coaches were different and they pushed us hard, not only to win, but to teach us what it takes to overcome obstacles. Tackling the four of them was definitely a bigger obstacle than what we were used to!”

“Walking back into the stadium just brings back so many wonderful memories, ones that you just never forget. Yeah, they might be a fading memory, but once you walk through the gates and into the stadium, those old memories come rushing back. It is still an awesome feeling, even after all these years!”

Despite the fact that there are only five players still alive of the 11 first-team players from the 1959-60 Greyhound Football Team, the memories of the ‘59 season will come flooding back Friday when Wyrick cheers on the current Greyhounds.

With all the talk that currently surrounds the park, Wyrick shared these thoughts, “One thing I hope they never change is playing high football games at the park. The park was built to honor and remember all those who served our country and there are so many memories of football games played on that field. What a waste it would be to do away with such a big part of Shippensburg High School’s history. Let’s hope they rethink their plans and continue to find ways to revive Veterans Stadium, giving past and future generations of Greyhound Football fans the opportunity to share their stories of playing at this historic site!”

He said he is very excited about Friday’s game and can’t wait to walk into the stadium once again, proudly wearing his Shippensburg Letterman Jacket. “The jacket and the stadium are both parts of Shippensburg history, just like I am,” he said with a chuckle.