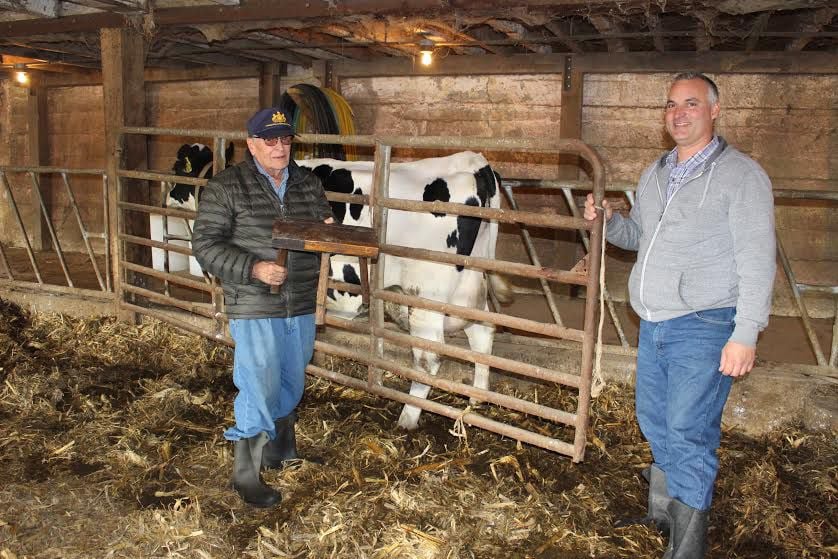 Dairy farmer Zane Garber explains the process of milking a cow to Shippensburg Mayor Bruce Hockersmith during the Farm-City Job Exchange last week. Hockersmith brought his 3-legged milking stool along with him just in case he needed it! 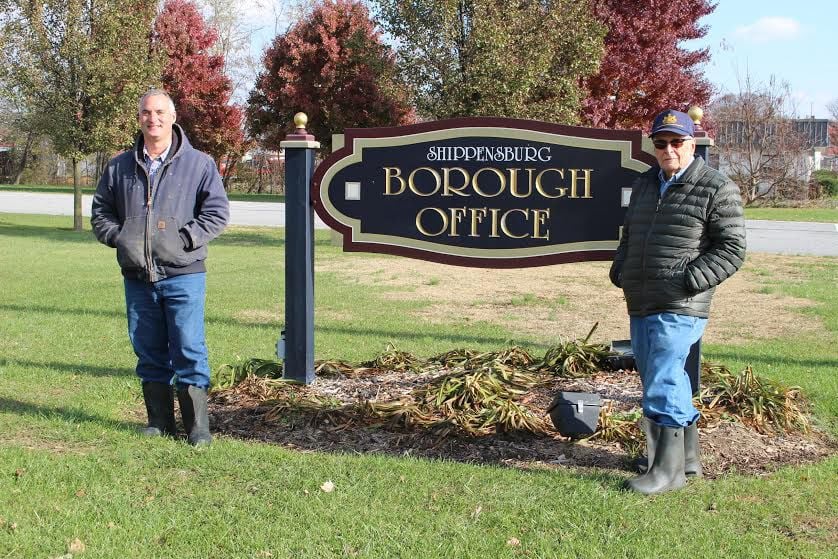 Shippensburg Mayor Bruce Hockersmith gave Zane Garber of Rock Solid Farm a tour of Shippensburg last week as part of the Farm-City Job Exchange Program. The tour included a stop at the Borough Office on Fayette Street where Garber gained a better understanding of how municipal government works and what it takes to keep the borough running smoothly. Just like farming, everyone has to work together to ensure a quality outcome! 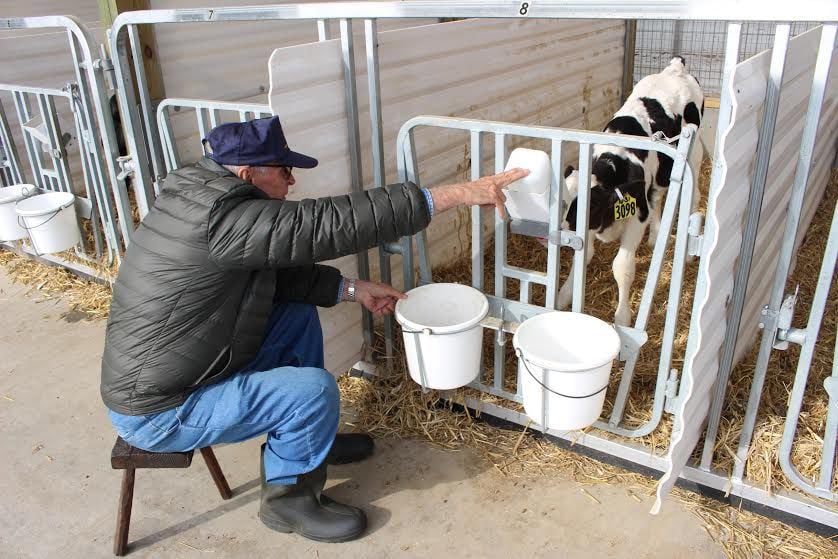 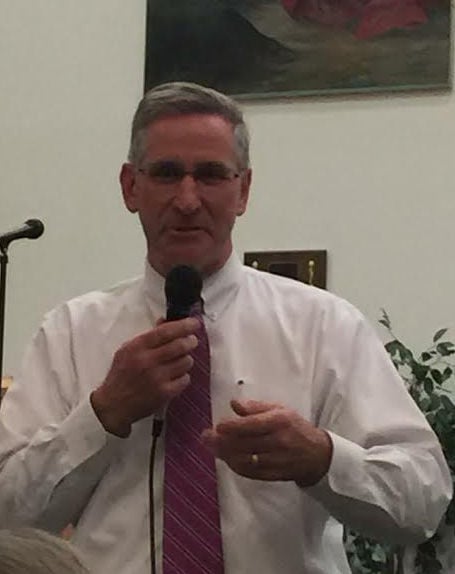 Dairy farmer Zane Garber explains the process of milking a cow to Shippensburg Mayor Bruce Hockersmith during the Farm-City Job Exchange last week. Hockersmith brought his 3-legged milking stool along with him just in case he needed it!

Shippensburg Mayor Bruce Hockersmith gave Zane Garber of Rock Solid Farm a tour of Shippensburg last week as part of the Farm-City Job Exchange Program. The tour included a stop at the Borough Office on Fayette Street where Garber gained a better understanding of how municipal government works and what it takes to keep the borough running smoothly. Just like farming, everyone has to work together to ensure a quality outcome!

In today’s society you rarely hear the words farmer and politician used in the same sentence. That wasn’t the case last week when Shippensburg Mayor Bruce Hockersmith and dairy farmer Zane Garber came together to be part of the 61st Annual Farm-City Job Exchange Program. The two men had the opportunity to take a firsthand look into the day-to-day happenings of the others’ world when they spent a day together.

For the past 60 years, folks from both the farming and city communities have come together to celebrate the vocational and lifestyle diversities that make up our unique community. The exchange program is a unique way to bring the two backgrounds together, giving them an opportunity to experience the differences, and similarities between the lifestyles they represent. Farm-City Week wraps up with a celebration banquet held at Newburg United Methodist Church and features a delicious turkey dinner with all the trimmings. Following the meal, the job exchange participants come together one last time to talk about, and share their experiences with members of both the farming and city communities.

The exchange was coordinated by Ray Thrush, chairman of the Farm-City committee, several months earlier.

“When Mr. Thrush called me in early October about doing the exchange, I thought it would be a great opportunity,” Garber said. “I wasn’t thrilled about speaking in front of an audience, but thought,

'How hard can it be?'” Thrush told him he didn’t have to decide right then and there – he would give him a week to think about it. “His week must be different than mine,” Garber laughed as he told those attending the banquet. “I'm pretty sure he called me the next evening!”

The two men had never met prior to the day of the exchange, which took place on Nov. 15. They had agreed to meet at Rock Solid farm, where Garber and his wife, Juanita, operate a 300+ head dairy farm.

“When Zane first called me about getting together, he suggested we meet around 8:30 when the first milking of the day would be in full swing,” Hockersmith explained. “Now my knowledge of milking

suggested that it happens earlier in the morning, and I wanted to be there to see the process from the beginning. So, after a few more emails between us, Zane called back and suggested I be there at 7:30. I agreed, although still thinking that a farmer’s day begins much earlier than 7:30.”

He arrived at the Garber Farm around 7:25 to find a young man feeding the ‘fresh’ cattle. The young man explained that fresh cows are those that have recently had calves and he was observing the cows’ food consumption. “Are you Zane,” Hockersmith asked, assuming this was Garber – after all, who else would it be at this time of the morning? The young man replied, “No, I’m Harlan High, I take care of this part of the herd.” He told Hockersmith that Zane was in the house getting cleaned up and having breakfast. “At that point I figured he was dirty from the milking operation, but didn’t think that had happened yet,” Hockersmith said. High continued to tell him about the milking process, showing him around the parlor where 20 cattle would be milked at one time. “Once the teats are sanitized and checked for any potential problems, four suction cups are put in place and the milking begins,” Hockersmith said. “Approximately 320 head of cattle are milked three times a day on the farm. At that point, Zane showed up, satisfied by a hearty breakfast and ready to walk me through the rest of the operation.” Hockersmith quipped he thought to himself, “My how the farming industry has changed from what I knew it to be years ago.”

Garber gave Hockersmith a tour of the facility explaining that the milk is piped to a cooling unit called a plate cooler, where it is chilled before going into the bulk tank awaiting collection by the milk hauler. All while this is taking place, Garber pointed out how the computer tracks the quality of the milk, the amount of milk, and which cow the milk is coming from, which is done by an electronic collar-type attachment that is placed on the cow.

Rock Solid Farm is more than a dairy farm. The Garber family raises most of the feed required to maintain the milking operation. The farm provides corn, hay and alfalfa. Another leased farm in the Chambersburg area provides soy beans, which must be roasted to be part of the food mixture for the cattle. This process requires special storage bins, vertical silos and BIG plastic bags to protect corn and

other ingredients from the weather. There are also machines to monitor how much of a certain ingredient goes into the food mixture that will ensure the herd produces an average of 90 pounds of milk per day.

After a ride to the quarry in a BIG truck that required the use of air brakes (which Bruce was quite excited about riding in), the two men set out to explore Shippensburg. Garber said he was curious about what Bruce’s job entailed so he asked, “What do you do as mayor of Shippensburg?” Hockersmith replied, “Not much!”

Garber said he pulled out his phone and did a quick Google search that told him the mayor traditionally oversees a city’s main departments including the police, fire, education, housing and

transportation departments. He asked to see Bruce’s office to which Bruce said, “I don’t have an office.”

The two proceeded to drive through Shippensburg where Bruce pointed out his home on West King Street and the balcony that he refers to as his office, which made Garber chuckle. “I thought we might stop in but Bruce chose not to, for fear of leaving a farm smell behind,” Garber laughed. They continued their drive-by tour of the town that took them past several churches and historical buildings that Bruce educated Garber about as they passed by. Making their way to the borough office, Hockersmith pointed out several old maps and explained how the town operates. Garber was introduced to the office staff and was briefly educated on individual roles of the staff and things of that nature. The next stop on the tour was the police department where Garber was introduced to Chief Fred Scott. The three gentlemen discussed several issues facing our town, such as drugs. After meeting Scott, Hockersmith treated his guest to lunch at the University Grille and then it was back to the farm to finish out the day.

The evening began at 6 p.m. with a reception and silent auction that helped to raise money for the Fred Dillner Scholarship Fund. The silent auction was a first-time endeavor for the Farm-City committee and included several baskets donated by local civic groups. Bids were placed for each, with the basket going to the highest bidder. Proceeds from the auction will benefit students in the Shippensburg community for years to come.

The evening progressed with the meal and musical entertainment by the Oasis of Love Choir who sang a wonderful blend of traditional selections that were given a standing ovation by attendees. Dr. Sean Cornell, emcee for the evening, introduced Hockersmith and Garber who shared their experiences.

Hockersmith said after observing the dairy operation at Rock Solid Farm, he now has a new appreciation for those who own and operate dairy farms. “It was quite interesting to see what all goes into the process of milking cows nowadays and making the feed for the herd,” Hockersmith explained. “I have gained great respect for our dairy farmers who dedicate themselves to providing milk for this nation 365 days a year.”

Garber, on the other hand, said he now knows somewhat of how the borough operates. “It’s quite an operation, one that is different from how a farm operates, but in other ways it’s very similar.” He said jokingly after learning about the various roles of the borough staff, “I’m glad I don’t live in the Borough of Shippensburg and have to worry about late payments or changing the color of my house roof.”

He thanked Hockersmith and everyone involved in keeping Shippensburg running smoothly and for making it such an inviting place to live and work. “It was really nice to see the town, the hanging flower baskets and the Christmas lights.” He wished those in attendance a very happy Thanksgiving and a wonderful Christmas season.

Special guest speakers for the evening were King Whetstone, President, NASS, USDA Regional Director, and Secretary of the PA Department of Agriculture Russell Redding. King spoke of the upcoming census that will be arriving in everyone’s mailboxes soon and encouraged their participation in the survey. He said the information gather in the survey helps the department determine where all of the farms and ranches are located throughout the state and provides information about these farms.

Redding spoke of the unique farming areas in the commonwealth and all of the great opportunities we have as citizens to get out and talk to our farmers and thank them for what they do. He recognized all of the farmers in the crowd as well as all of the non-farmers in the group who like to eat food produced by the farmers. He gave thanks to each of them for all that they do. He said, “This is a unique blend of the farm and city right here and we should all be thankful for each and every one of their contributions, especially during this season of thanksgiving!” He also talked of the unique blend of both the farm and city and how everyone has to work together in order to produce a quality outcome for all.