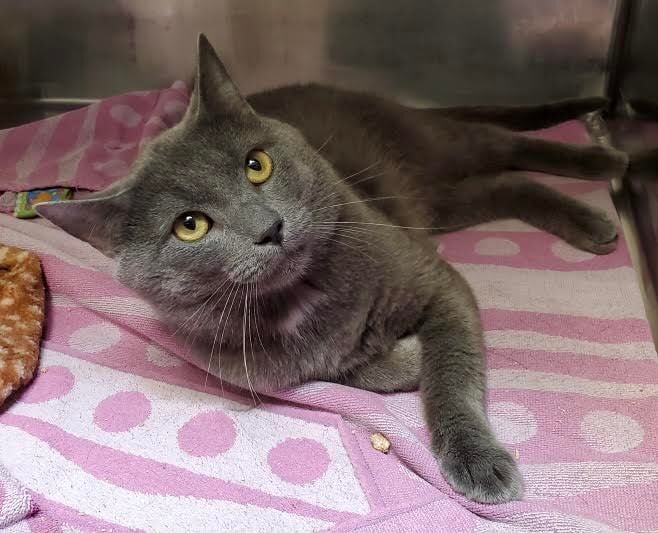 Ash came into the shelter because his owners could no longer care for him. He’s a 4-year-old gray boy who is super sweet. He doesn’t seem to care too much for the company of other animals, but boy, does he love his humans! Ash enjoys treats and getting his chin scratched. He would love to find someone that could be his new best friend. 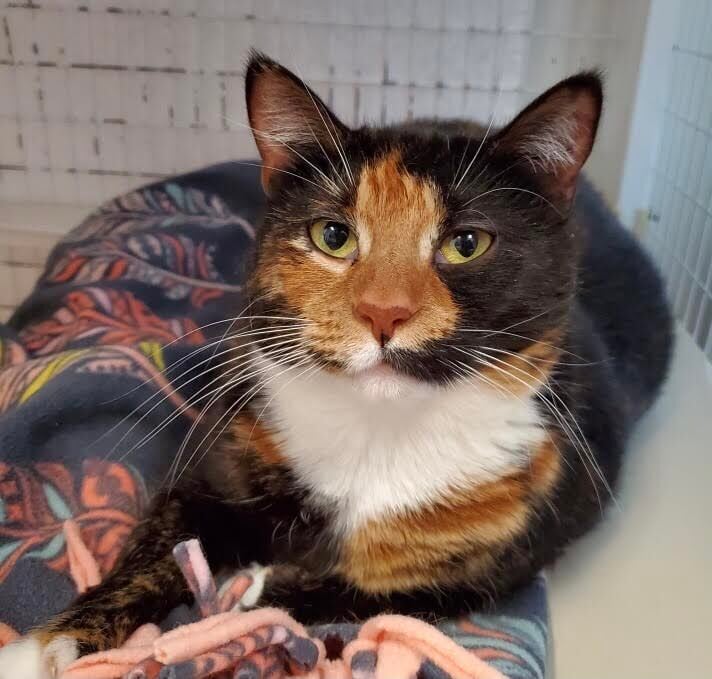 Sadie came into the shelter on Oct. 26, 2020, so she’s been at the shelter for almost a year. That’s too long to live in a cage. She was surrendered with 24 other cats because her owner could no longer care for them. Sadie is a 6-year-old calico girl looking for her second chance. Could you be who she needs?

Ash came into the shelter because his owners could no longer care for him. He’s a 4-year-old gray boy who is super sweet. He doesn’t seem to care too much for the company of other animals, but boy, does he love his humans! Ash enjoys treats and getting his chin scratched. He would love to find someone that could be his new best friend.

Sadie came into the shelter on Oct. 26, 2020, so she’s been at the shelter for almost a year. That’s too long to live in a cage. She was surrendered with 24 other cats because her owner could no longer care for them. Sadie is a 6-year-old calico girl looking for her second chance. Could you be who she needs?

The rat race. That’s what he’s heard it called and when he’s in the car for the two hours it takes to get to and from work, in stop-and-go traffic, he figures the description is pretty apt.

He’d done it. Worked his way up the corporate ladder, made his parents proud, kept up with the Joneses, created a life for himself. He’d bought a nice house, furnished it well, and kept himself in decent shape.

Sure, he sometimes works 50 to 60 hours a week, but he figures it’s a relatively simple burden to bear to have the life that he does.

These are the mantras he tells himself as he unlocks the door to his home – sometimes well after the sun has already set, even in the summertime.

He looks around at his granite countertops, recessed lighting, leather sectional sofa, and nearly wall-to-wall entertainment system and he tells himself it’s worth it.

And if occasionally he notices his own footsteps seem to echo on the floors as the only sound in the house, he ignores the small pang of solitude and doesn’t even think of the word loneliness.

His life goes along in an orderly fashion, just like he planned, until one evening when he arrives home and, as he’s jiggling the keys in his hand, he hears an odd sound. It’s an almost human-like cry, quite soft, and it seems to be coming from the neatly trimmed bushes – maintained by a company that does the work when he’s not even home – just off the front porch.

Curiosity more than anything makes him stop and peer over the railing. He’s not at all prepared for the sight of a small, gray kitten with striking green eyes looking up at him through the branches of his shrubbery.

His first thought, he has to admit is, a cat? Really? His family had a few dogs while he and his siblings were growing up and he really doesn’t have anything against cats, it’s just, he’s a dude and has an image to uphold and plus, he’s never really spent time with a feline.

Still, he schools his voice into a bit of a soothing murmur and asks, “Hey there. Are you okay?”

The kitten immediately steps out of the bush, tail high in the air – almost happy-looking – with a trilling meow for accompaniment.

Something shimmies in his chest, producing a warm sensation and he smiles. It’s dumb, but it feels kind of nice to have something respond to his presence in that way.

Against his better judgment, he makes the trip to the store for cat food and bowls, and tells himself it’s just so the poor thing doesn’t starve. The old blanket he finds in the back of his closet, he convinces himself is just for warmth.

And if he maybe, in his head, calls the kitten Chevy after his dad’s favorite 1967 Chevrolet Impala, it’s only in his head, never out loud. And if he comes to think of the spot by the porch as Chevy’s place, it doesn’t mean anything.

If sometimes on his ride home, he stops off at the store for a cat toy, it’s just so Chevy’s got something to relieve boredom. And if in the middle of the day, at work, he finds himself smiling at the thought of Chevy’s greeting when he arrives home, it’s just

because it’s become so commonplace.

He gets a little worried the evening that Chevy races past his feet and gets into the house before him. He tries to stop the squirt, but the kitten walks around as though the house has never been off limits.

He spends the next hour chasing the kitten from room-to-room, with meows and mischievous feline looks for company. He laughs outright when Chevy discovers the full-length mirror and jumps at least a foot in the air at the reflected image.

A few minutes later, he sighs to himself, retrieves his keys and goes to the store to get a litterbox and litter.

He becomes ridiculously well-versed with things like cat trees, scratching posts, catnip toys and even the concept of spaying and neutering. He’d never set foot inside a vet’s office before, but the girls at the front desk start to recognize him after a while.

Three months after the fateful evening he’d discovered a vagabond transient beside his front door, Chevy’s sleeping on the pillow next to his head and batting him awake with her soft paws – never claws – for breakfast each morning. He barely needs an alarm clock anymore.

And when the footsteps that join his on the stairs are four-legged, his house and his life, though both well-earned, don’t feel quite as empty anymore.

Jennifer Vanderau is the Publications and Promotions Consultant for the Cumberland Valley Animal Shelter, and can be reached at: cvascomm@cvas-pets.org. The shelter accepts both monetary and pet supply donations. For more information, call the shelter at: (717) 263-5791, or visit the website: www.cvas-pets.org. CVAS also operates a thrift store in Chambersburg. Help support the animals at the shelter by donating to or shopping at the store.