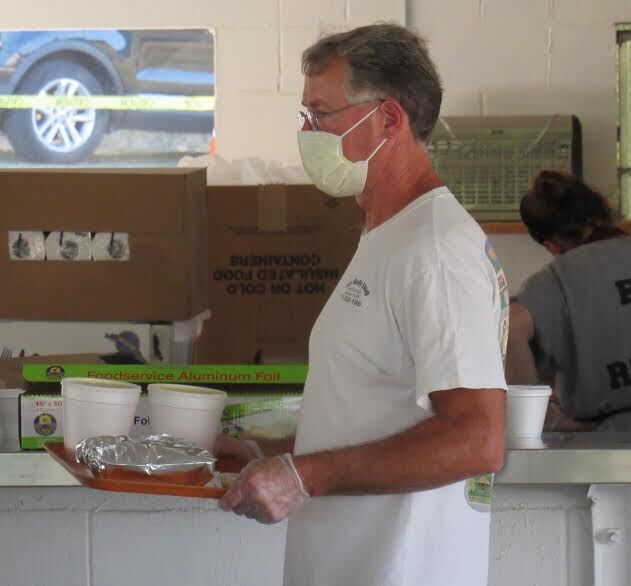 Rick Shoemaker of the Upper Frankford Township Volunteer Fire Co. carries a tray of food for a customer at the fire company’s Drive-Thru Fair Food Weekend.

Members of the Upper Frankford Township Volunteer Fire Co. work hard over the weekend to get meals to supportive community members during their Drive-Thru Fair Food Weekend.

Rick Shoemaker of the Upper Frankford Township Volunteer Fire Co. carries a tray of food for a customer at the fire company’s Drive-Thru Fair Food Weekend.

Members of the Upper Frankford Township Volunteer Fire Co. work hard over the weekend to get meals to supportive community members during their Drive-Thru Fair Food Weekend.

Many members of the Upper Frankford Volunteer Fire Co. worked hard in the scorching heat over the weekend to provide the community with staple fair food since the pandemic caused the company to cancel its largest fundraiser.

“We had 18 volunteers helping Friday night, and 15 on Saturday night,” Stets explained. “It was really the same planning as a real fair, but we were nervous because we had zero idea how many folks would come out. But, we raised $7,500 this weekend! We had a very good two evenings, and a great turnout of community support who gave donations above and beyond the cost of their meal. We had all the fair food minus ice cream and funnel cakes, which were asked about many times by the crowd as they came in. Our volunteers worked tirelessly getting prepped all week for the unknown really. How many people would come out? How well was it going to be received? But in the end, I know we have some dedicated folks who will support our efforts every time we strive to provide them a service and do well for the community. From all of us, thank you for the loyal support during these trying times in everyone’s lives.”

Stets said their annual fair typically brings in $35,000 before bills are paid. However, with very successful meat raffles and some successful BBQ dinner fundraisers, the company is still in good shape financially, even though it took a hit from the pandemic.

The company posted the following message on its Facebook page:

“We’d like to thank everyone who supported the Upper Frankford Township Volunteer Fire Co. the last two evenings with our Fair Food Drive-Thru. It was a very successful two evenings because of our loyal supporters and our hard working volunteers. We’re sure we’ll miss someone who helped, but a HUGE ‘THANK YOU’ goes out to Matt, Andrea, Harold, Danielle, Christa, George, Rick, Logan, Myra, Jena, Jenni, Heather, Chris, Dustin, Andrew, Jeff, Robert, Ginger, Dave, Roger, Tiffany, Kalie, Steph, Vance, Kristine, Wayne, Erika, Renee, Alexis, Leylan, Ayden, Calan, Jordan and Dane. These folks made everything possible this week with a lot of hard work, and we look forward to the improvements in our organization as we are in serious mode of replacing Engine 248 and also planning a major upgrade to our building. It’s a fun time to be a member of this fire department because we do so much more than answer the bell when the alarm rings. Thank you all again for your continued support!”