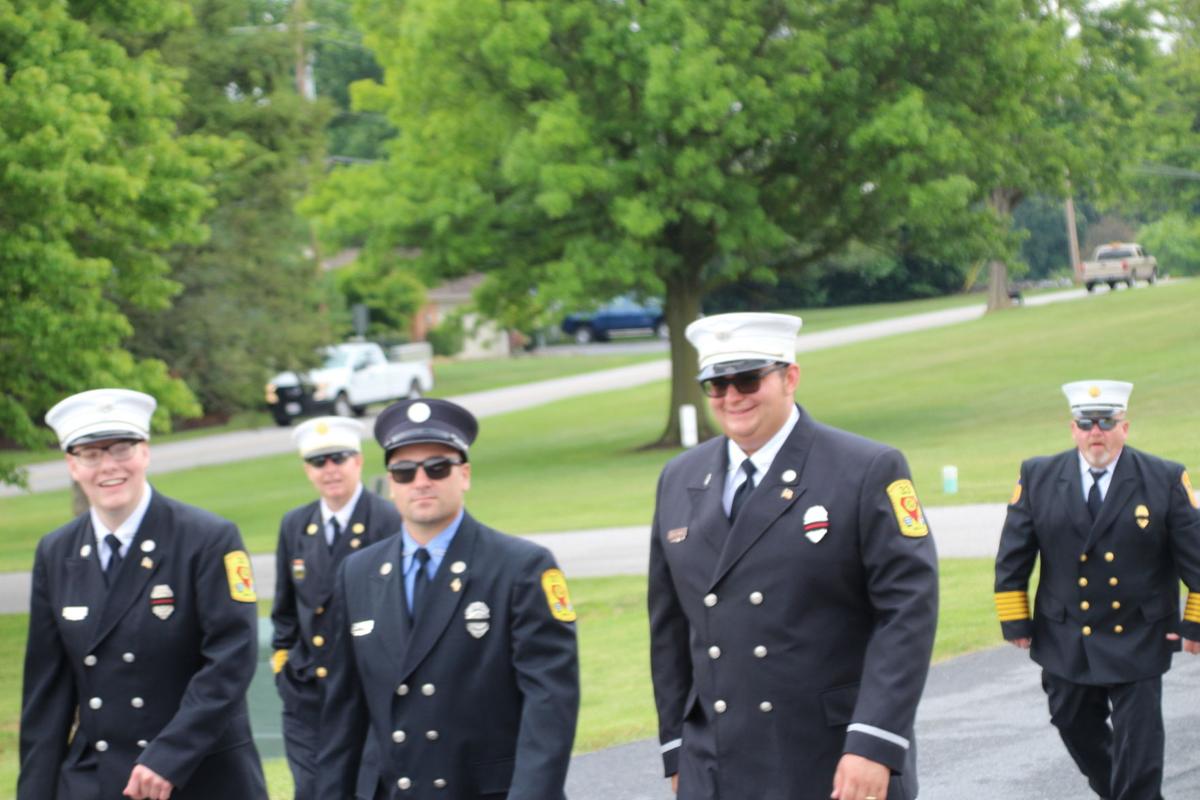 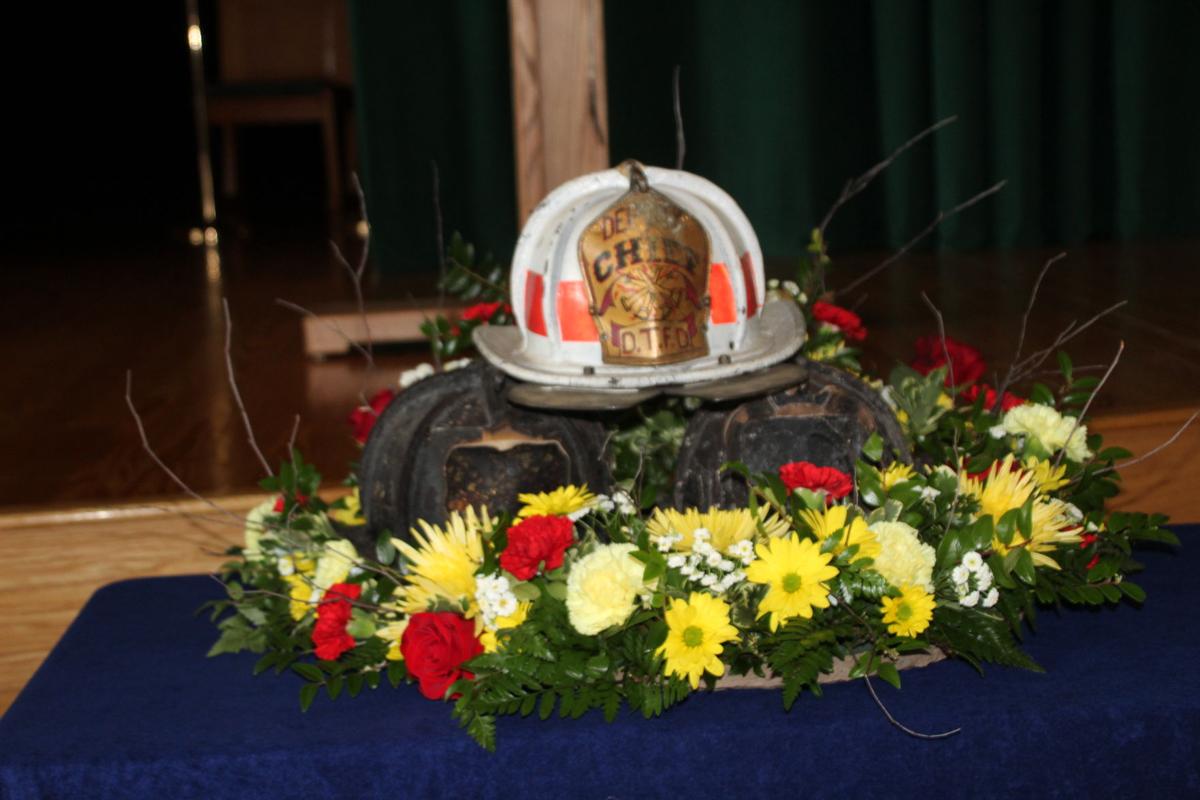 The Fire Chief Helmet belonging to the late Greg Bretzman is placed atop a spray of flowers for his funeral Saturday. 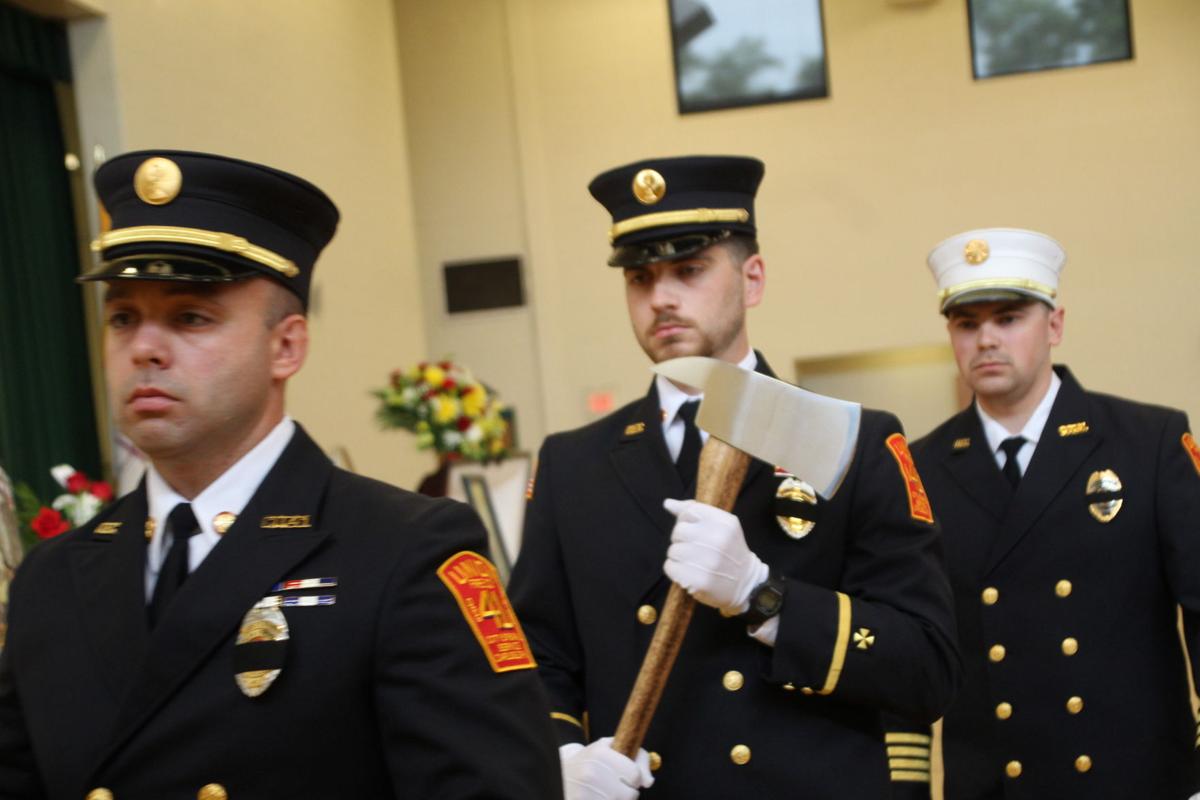 An Honor Guard participates in the service for former fire chief Greg Bretzman. 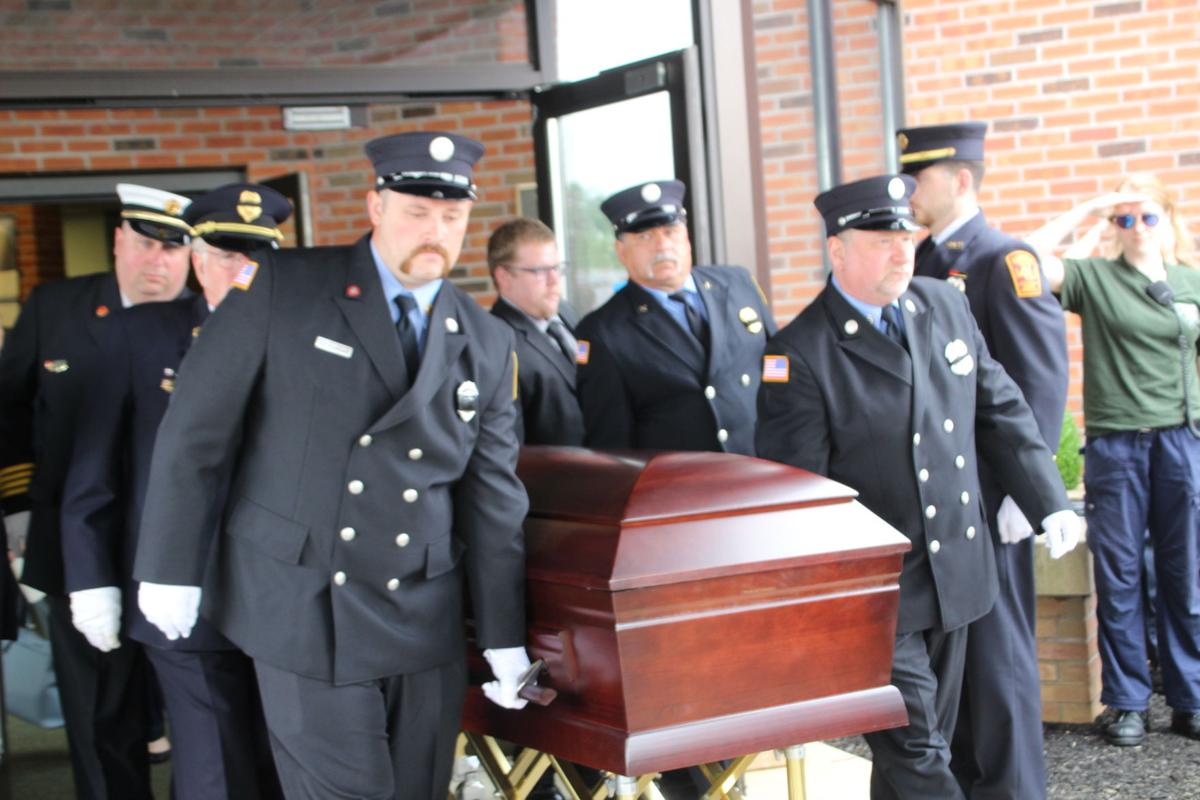 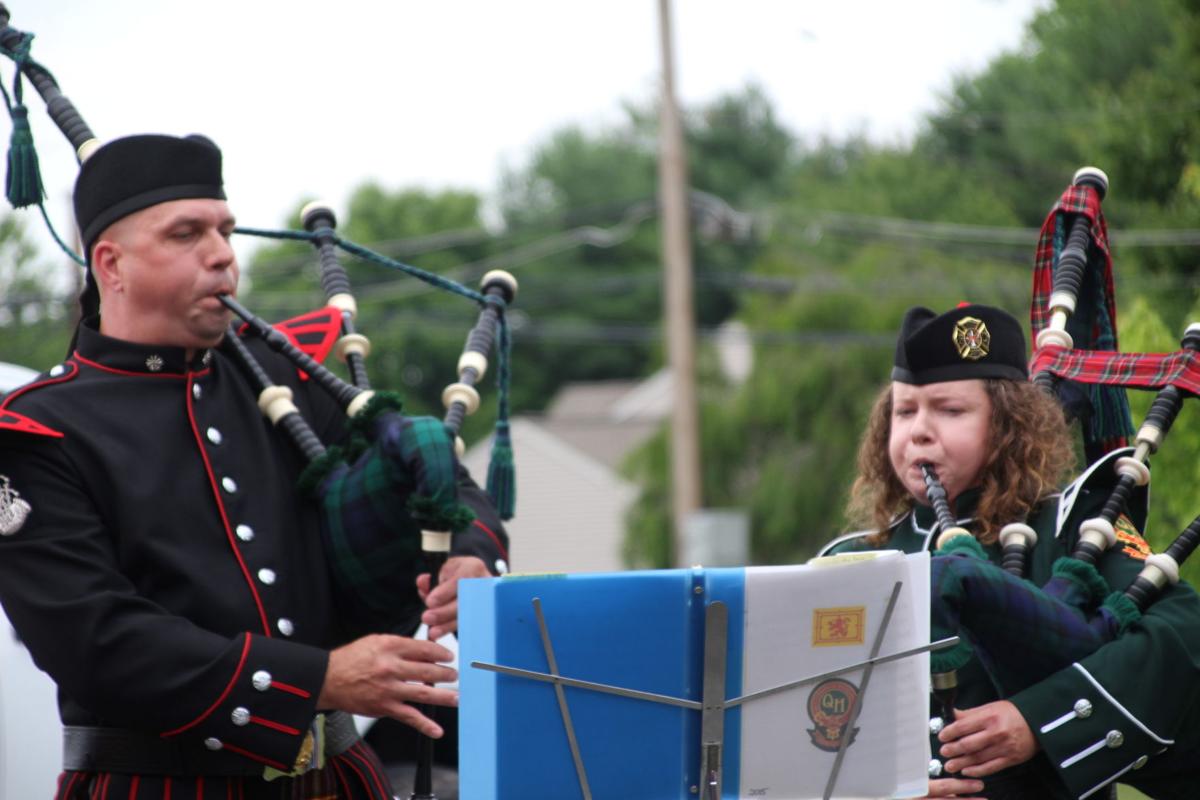 Bagpipers play as Greg Bretzman’s casket departs from the church. 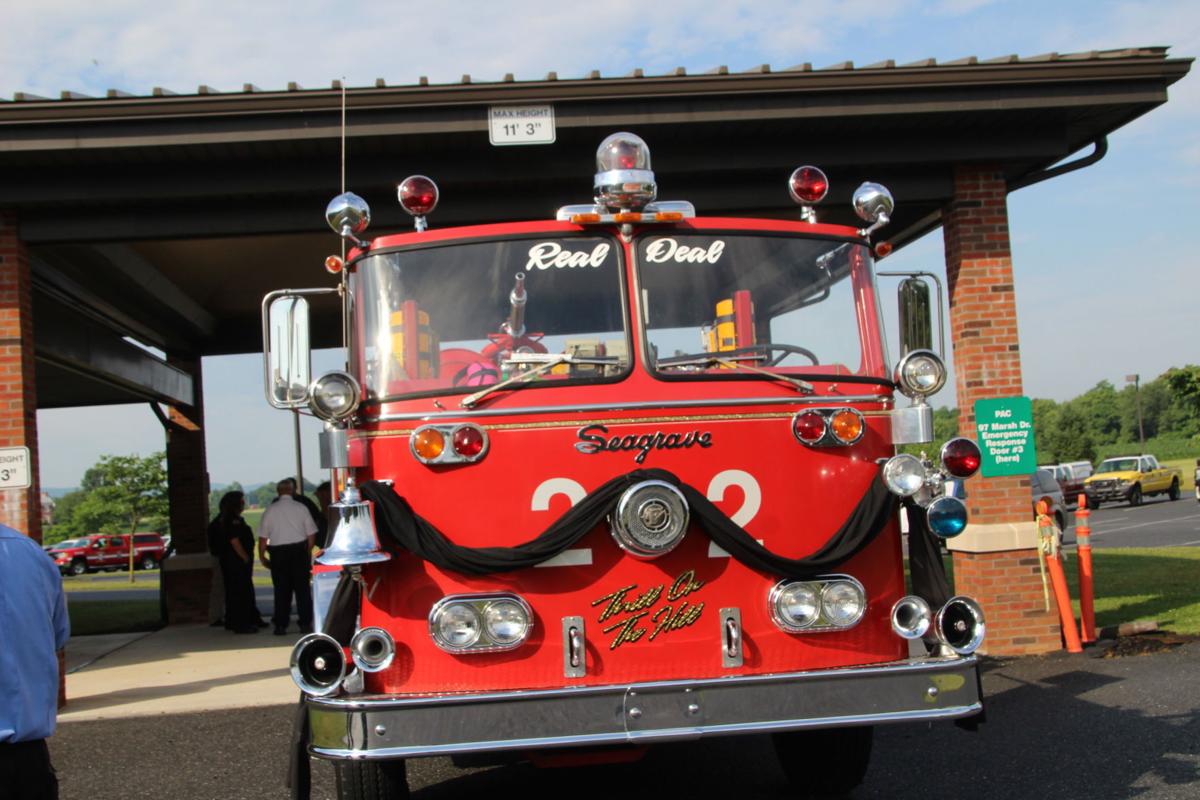 The Fire Chief Helmet belonging to the late Greg Bretzman is placed atop a spray of flowers for his funeral Saturday.

An Honor Guard participates in the service for former fire chief Greg Bretzman.

Bagpipers play as Greg Bretzman’s casket departs from the church.

Many fire and EMS companies attended the funeral service for Gregory A. Bretzman, former Firefighter and Fire Chief of The Mount Holly Springs Fire Co. and former Fire Chief of Dickinson Township, Saturday.

Hundreds walked through the gymnasium area of the St. Patrick Church in Carlisle to pay their respects to the members of the Bretzman Family, which has a long history of volunteer fire service.

Bretzman gained his firefighter angel wings on Tuesday, June 23, after a five-year battle with cancer, at age 58.

Fellow Cumberland County firefighter Stanley Andrew Horn wrote on Facebook, “Today I laid my brother to rest. One of the finest men to ever become a Fire Chief in Cumberland County. Greg Bretzman, you gave your life in dedication to the fire service of the county, not only as a chief, but a leader in training of younger firefighters of our future. My brother, take your place in Heaven’s Station for those you have led and trained have it from here on.”

“The Mount Holly Springs Borough Police is incredibly saddened to hear of the passing of Greg Bretzman,” the department wrote on Facebook. “Chief Bretzman served our community faithfully for many years, and will be deeply missed. We send our condolences to all who loved him, including Dickinson Township and Citizen’s Fire Department. Greg has been active for as long as we can remember. Thank you for your efforts and services. You will be deeply missed.”

His daughter-in-law, Ashley Bretzman, wrote on Facebook, “We cannot thank everyone enough for their kind words, prayers and support throughout these last few years. This morning, Greg gained his wings and is now at peace. Little did we know, a little over five years ago, Greg would begin such a long, tiring battle with cancer. At times, it tested him, mentally, physically and faithfully, but he never once gave up. He literally fought until the very end. Our hearts ache, tremendously, but we know he has the best seat in the house now, and is watching over all of us. We are more than positive that he’s up there wheelin’ for Heaven’s Station.”

Ashley and Jacob Bream have organized a GoFundMe campaign for Bretzman’s family to help with funeral and medical-related costs.

The GoFundMe reads: “Greg is a third-generation firefighter who has been fighting fires for about 45 years. Firefighting was his passion and what he loved to do. In 2015, Greg was diagnosed with kidney cancer. Almost immediately Greg had to have one kidney removed because the cancer had completely taken it over. Over the next year, Greg started trial treatments to help combat the cancer. In May of 2016, we found the cancer had spread to his brain after we found him unresponsive. Greg was flown to Penn State Hershey Medical Center where they almost immediately performed a life-saving brain surgery. After some intense rehab, Greg returned home and recovered amazingly. Over the next three years, Greg had his ups and downs, but always came out on top. In January of 2020, a bleed was caused in his brain by another type of treatment, called gamma-knife. Greg had yet another major brain surgery at Hershey Medical Center. After this surgery, Greg unfortunately did not recover as well as the first surgery. He continued physical, occupational, and speech therapy. In early May, Greg learned that there were no more treatments available to help fight his cancer. By the end of May, Greg was placed on Hospice care to make the remainder of his time comfortable. Sadly, Greg passed away on the morning of June 23, 2020. Through all of this, his wife, Chris, has stood by his side and never once backed down from fighting alongside him. Right after Greg’s first brain surgery, Chris was forced to quit her full-time job to be able to care for Greg. Along with this, Greg was placed on disability and only able to work limited hours at the family business due to his health. As you can imagine, this has all placed a huge financial burden on the family. A mortgage, bills and now a funeral to pay for has left Chris in a very tough spot. We know it is a trying time for everyone and the family completely understands that. There is no doubt Greg’s family will greatly appreciate any donations.”

Donations may be made at: https://www.gofundme.com/f/greg-bretzman

PUBLIC NOTICE The Board of Supervisors of Shippensburg Township hereby