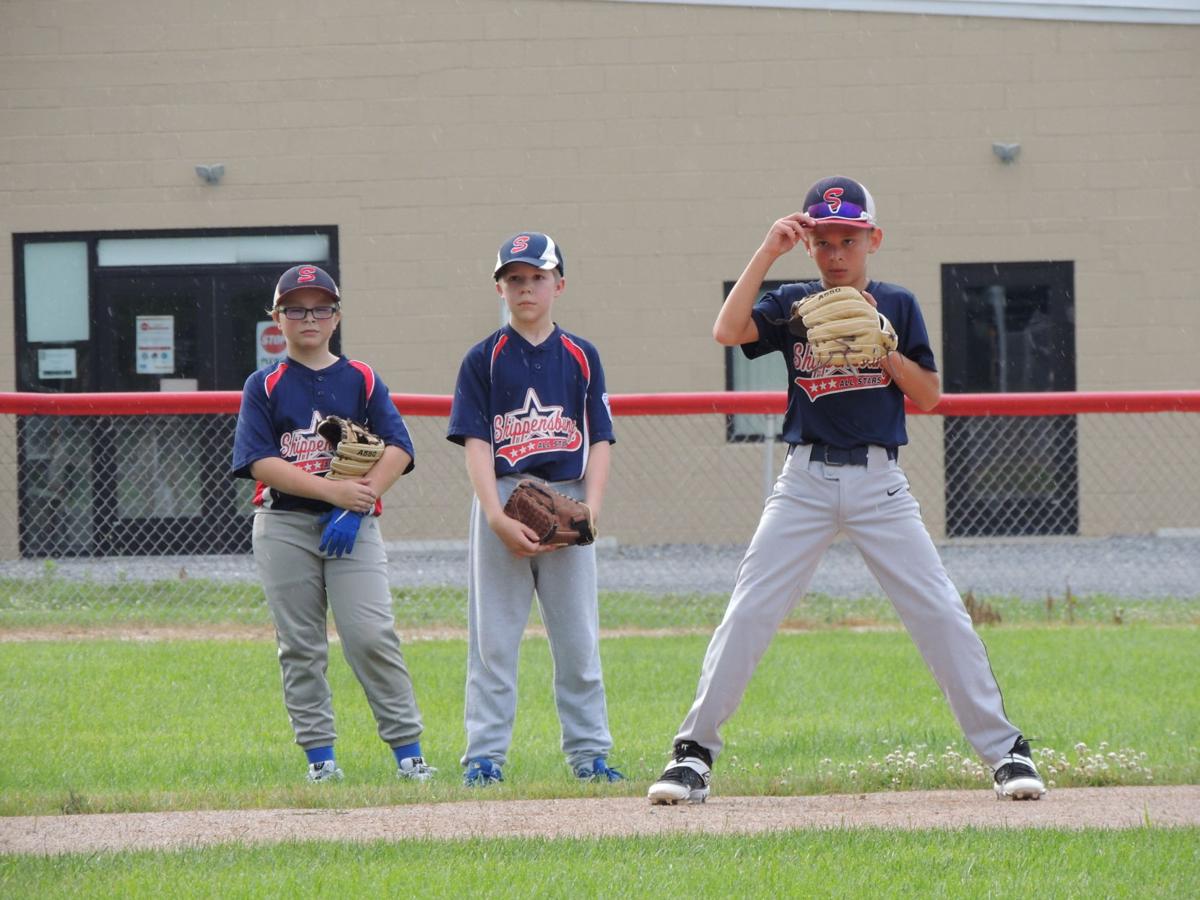 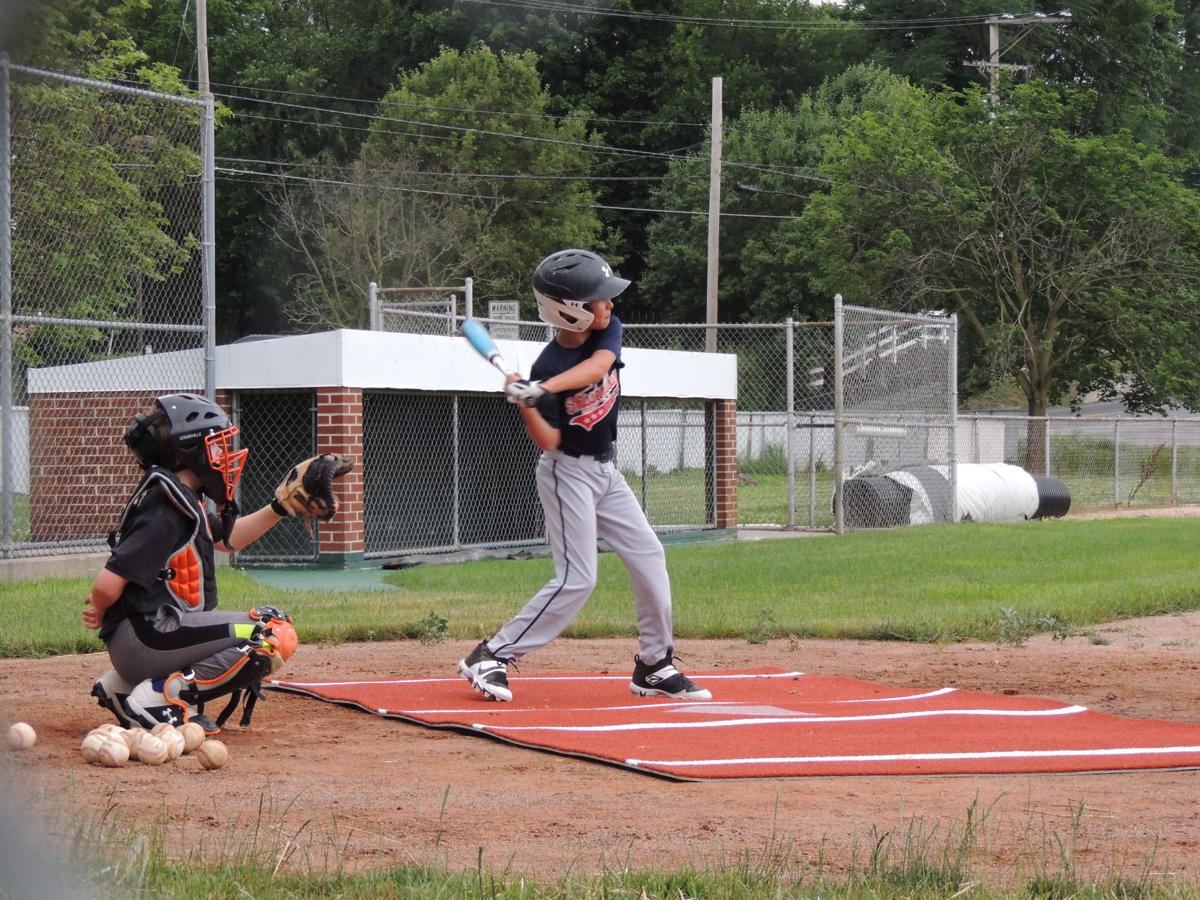 Chase Pattillo gets some swings in during batting practice at Doc Norcross Stadium. 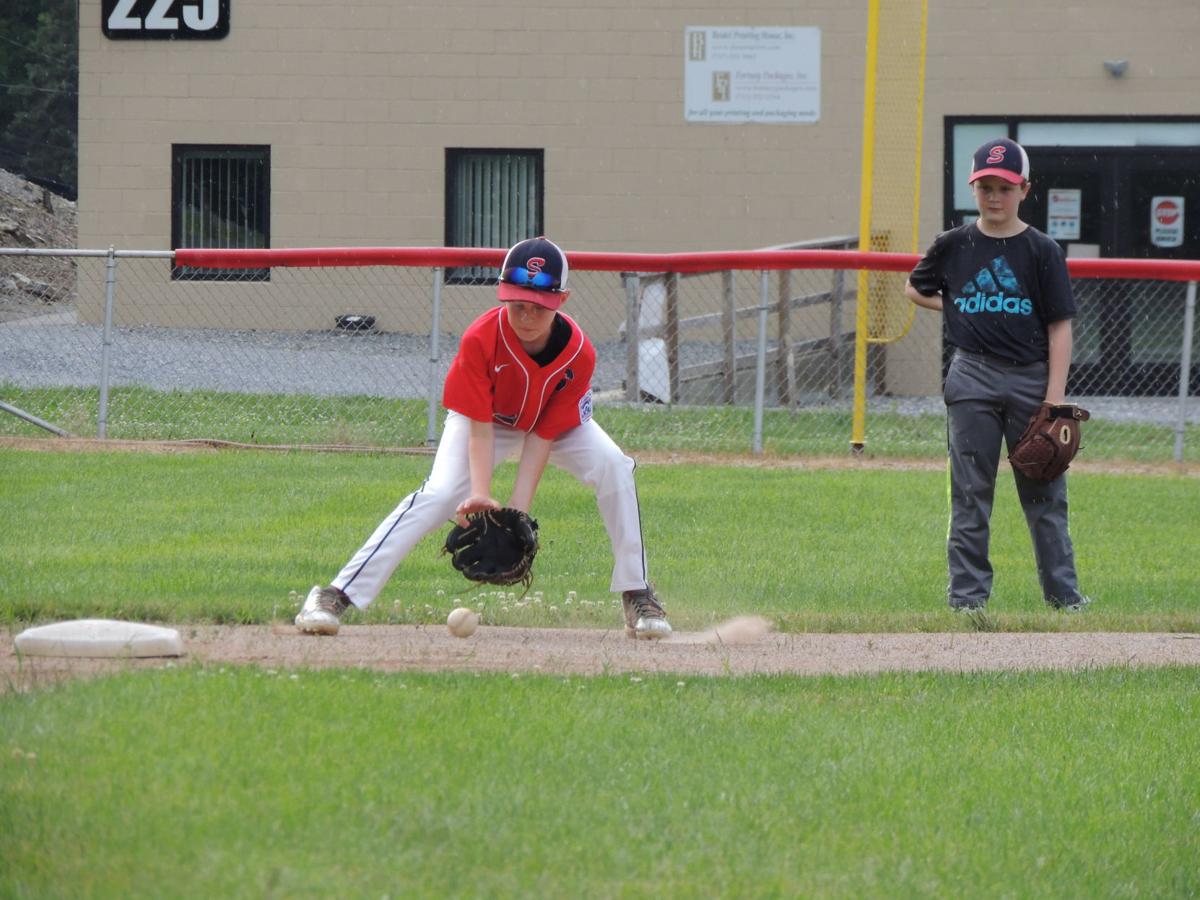 Brayden Ochs, front, fields a grounder at third base as teammate Xavier Kauffman looks on. 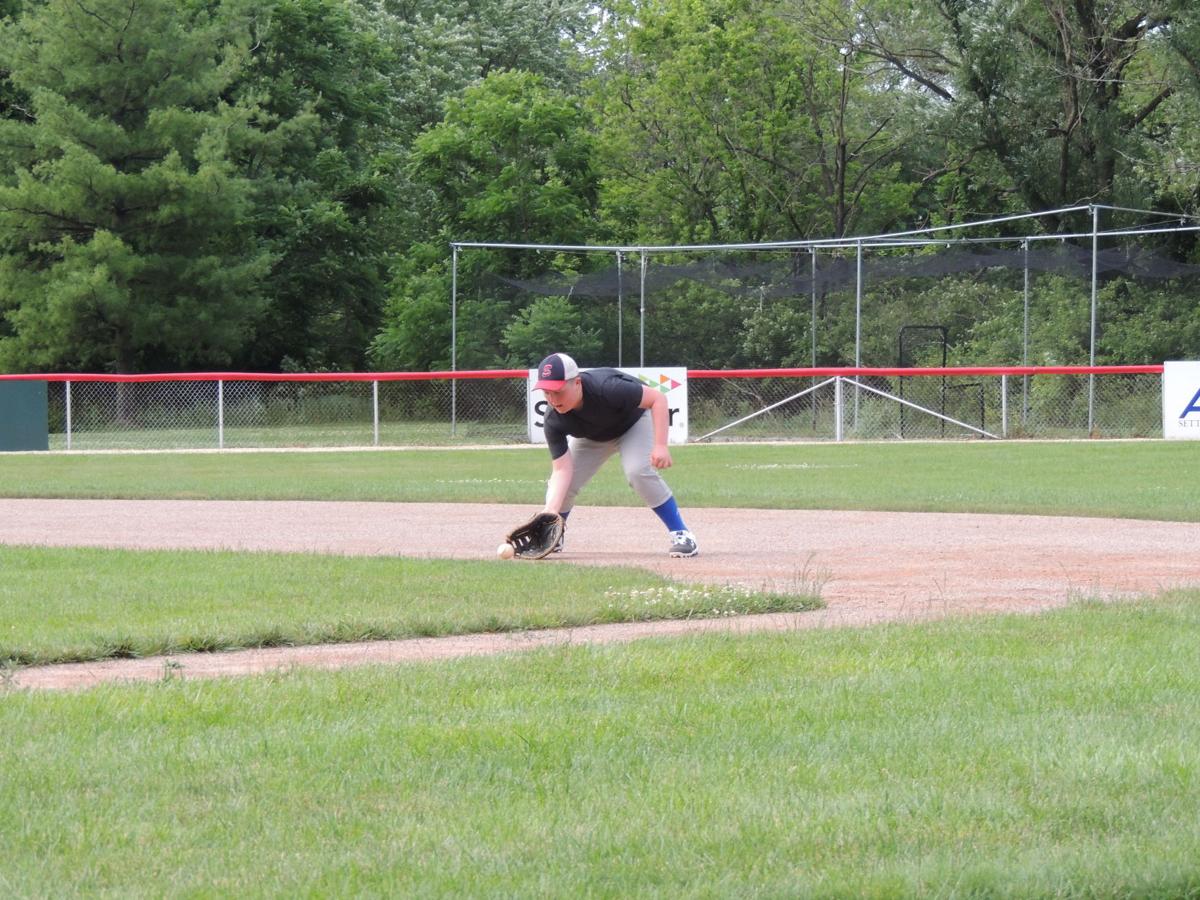 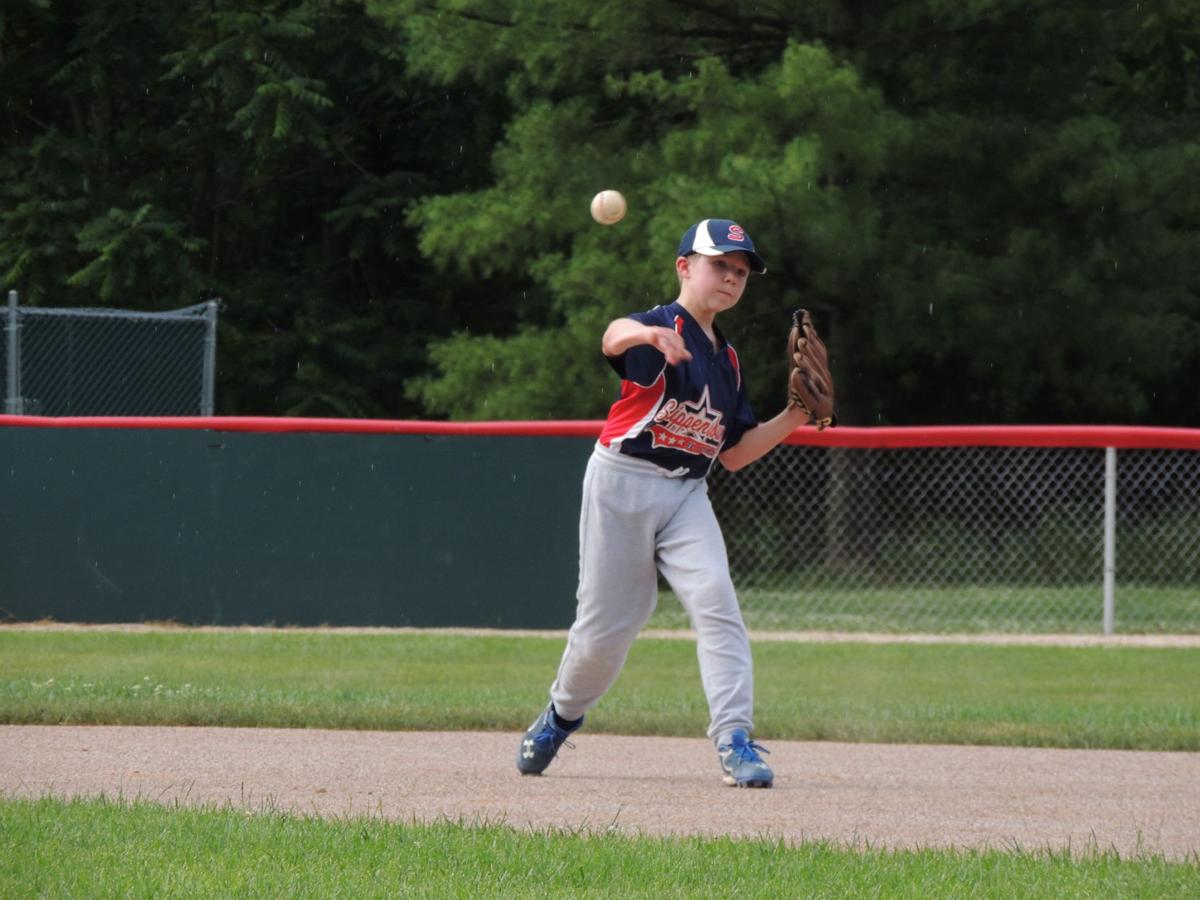 Sean Hockensmith fires a ball to first base during practice Tuesday.

Chase Pattillo gets some swings in during batting practice at Doc Norcross Stadium.

Brayden Ochs, front, fields a grounder at third base as teammate Xavier Kauffman looks on.

Sean Hockensmith fires a ball to first base during practice Tuesday.

Shippensburg Little League players had to dodge raindrops during their first two scheduled days of practice, but after three months of no baseball, the showers did little to dampen the excitement of getting back on the field.

Shippensburg Little League held its first team practices Monday and Tuesday in preparation for a pandemic-shortened 2020 season that will begin July 8, and run through the middle of August. Teams will play approximately 10 games and there will be no postseason tournaments.

In other words, the players and coaches are out there strictly for the love of the game.

“This whole COVID thing just interrupted everyone’s lives and I know baseball is so important to all these kids — and to us adults. Just to be able to get a little of it back and come out and play,” said Derek Bostick, Shippensburg Little League Board Member and Team Manager Tuesday at Doc Norcross Stadium.

The Majors Division will feature three teams, around half the number of a normal spring season.

Other aspects will also be different. There will be no concession stands and a limit on the number of fans who can attend games.

“Even though we don’t have a concession stand, we don’t have fans in the stands and we have to stay apart from one another — it is still about these kids on the field. And to see some of the smiles that we saw just at practice, when they are out here throwing the ball and laughing with each other, that’s why we do it. All the work that we’ve put in over the last 3-4 weeks to get everything ready, it’s all worth it for these kids,” Bostick mentioned. “They all want to play baseball and we want to give that to them.”

Majors Division player Chase Pattillo is one of the many kids that couldn’t wait to get back out there after biding his time during the late spring/early summer practicing with his family, playing video games and in the swimming pool.

“I’ve been wanting to play really bad,” Pattillo said. “What I’ve missed most about it is my teammates and just playing the game. We’ve been talking [during practice] about how bored we were during these past few months.”

Shippensburg Little League had been preparing for the start of the season for weeks in advance, all they needed was for the state to declare the area “green” and they were ready to hit the ground running.

“It’s been a lot of work to get ourselves ready, because we’ve had all this off time,” Bostick mentioned. “We wanted to do everything so that it is safe for the kids. [The Little League Board] all met and we really had a lot of conversations about how we can keep kids safe and get back to baseball, because we wanted to give them a slice of normalcy.”

The impact of the pandemic on the field is felt most by Shippensburg Little League’s 12-year-olds. Little League International canceled the 2020 Little League World Series and its regional tournaments, costing many of them their last, best shot to make it to Williamsport..

“It was very, very tough to see, especially the 12-year-olds to have their All-Star season taken away,” said Majors Coach Scott Ochs. “My son is 12, and I know it’s been a dream of his since he was 5-6 years old to play in that tournament.”

Over on Ripple Field, Shippensburg Junior League players were also busy at work Tuesday evening preparing for their summer campaign.

“All the kids are excited, the coaches are excited. There isn’t anything that we are looking at negatively. We are just happy to be out here having fun,” said Junior League Manager Randy Bibey.

For Junior League player Drew Chamberlin, playing baseball with his friends sure beats being stuck inside during the summer.

“You stay home all day and there is nothing to do for two months, then you finally get to be outside and see other people and you get to play ball. It’s a relief, kind of, to be able to interact and have fun again,” he said. “I’ve been missing all of my friends and it is just fun to play. I haven't had that for a while, it’s fun to have that back.”

Teammate Jackson Stought is eager to get back into the swing of a baseball season, no matter how short.

“It’s been rough, we have to get back on the roll of things like we were before,” he said.

PUBLIC NOTICE The Planning Commission of Upper Frankford Township will