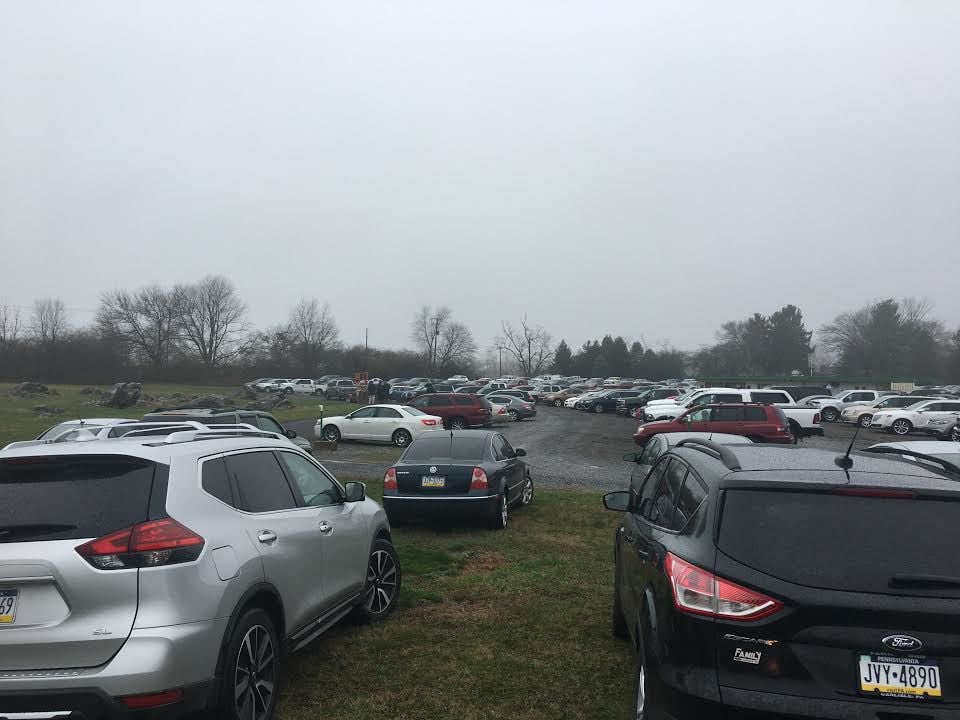 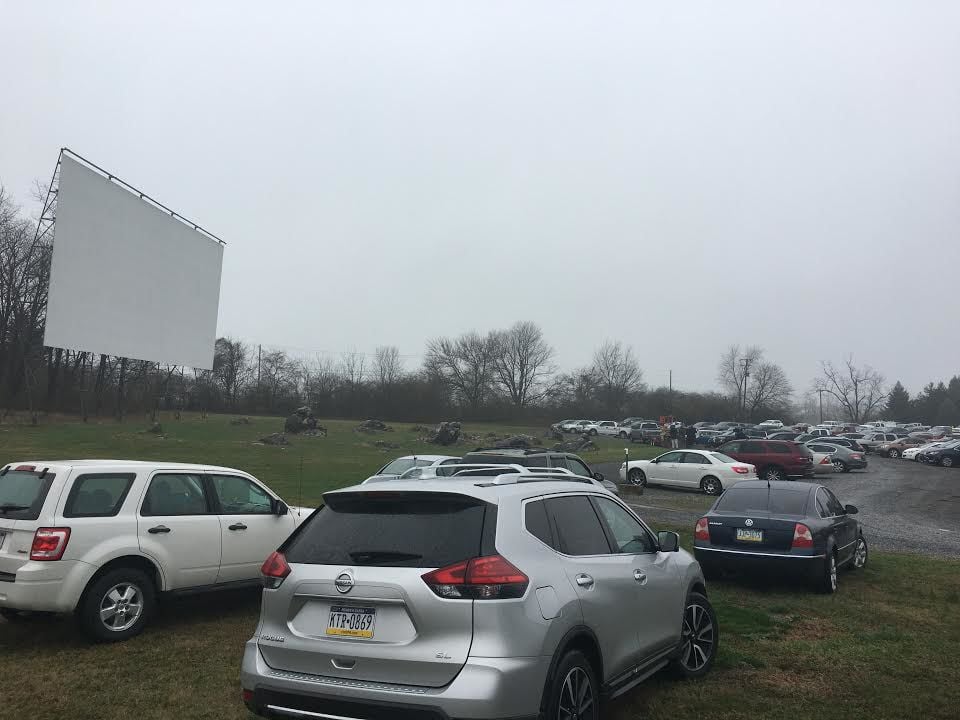 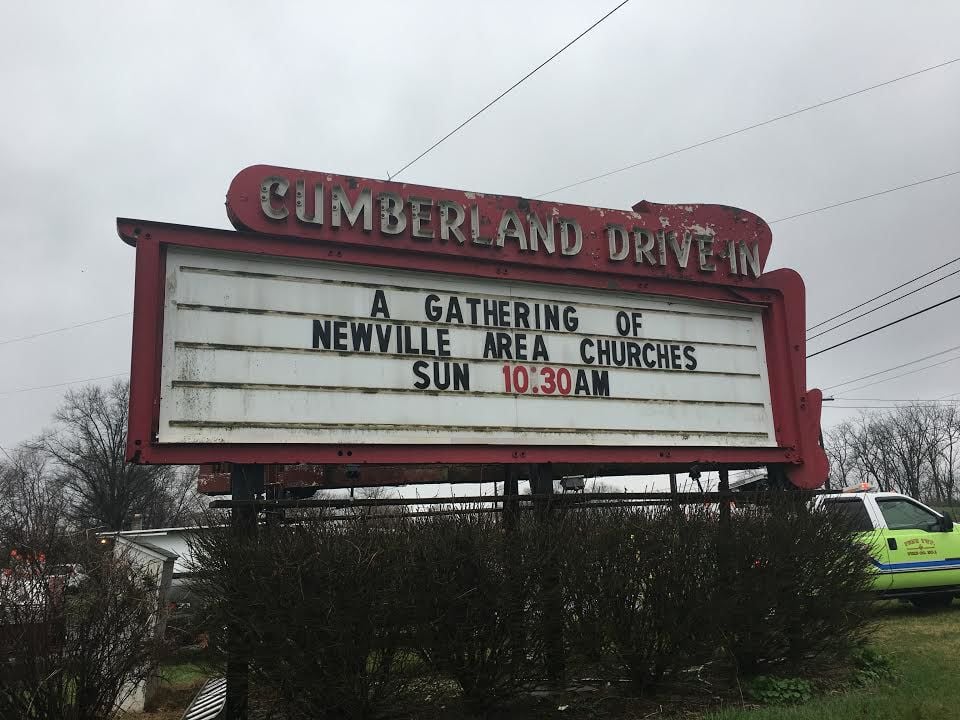 The Mowery family of the Cumberland Drive-In in Newville has opened their facility for Newville area churches to safely gather hundreds of parishioners in their vehicles to worship God on Sundays during the coronavirus pandemic. 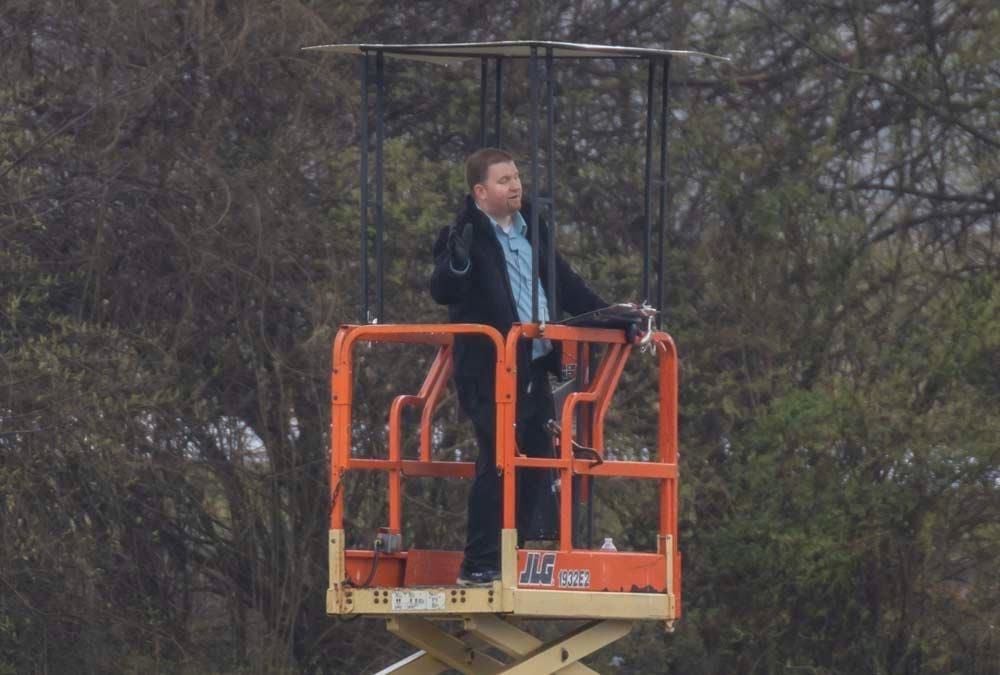 Pastor Barry Van Hussey of Christian Life Community Church in Newville delivers his sermon Sunday atop a JLG lift at the Cumberland Drive-In in Newville.

The Mowery family of the Cumberland Drive-In in Newville has opened their facility for Newville area churches to safely gather hundreds of parishioners in their vehicles to worship God on Sundays during the coronavirus pandemic.

Pastor Barry Van Hussey of Christian Life Community Church in Newville delivers his sermon Sunday atop a JLG lift at the Cumberland Drive-In in Newville.

Sunday’s message to Newville area worshippers was clear amid the clouds and raindrops that showered from above.

Jesus is with us all through life’s storms. And we are enduring a pretty major storm at the moment.

More than 300 families drove to the Cumberland Drive-In, 715 Centerville Road, Sunday morning to gather safely in their vehicles for their weekly service. Though the coronavirus may have shuttered churches across the state, it has not caused the Newville area’s faith to wane. Pastor Barry Van Hussey of Christian Life Community Church in Newville delivered a positive and heart-warming message atop a JLG lift Sunday for those gathered. While participants couldn’t respond with a resounding AMEN, their vehicle horns and flashing headlights kept the service lively as each took in Van Hussey’s words through their radios.

Lead Pastor Jeff Kettering of Newville Assembly of God, head of the Inter-Church Council, said he is the facilitator of the weekly services.

Kettering was approached by Jay Mowery, owner of the Cumberland Drive-In, to hold the services at the outdoor movie theater. The Mowery family has graciously opened the facility for the services.

“In this time of desperation, we know that it’s important for people to have the word of God to help calm their spirits and give them hope,” Kettering said. The council is not accepting offerings at the services, but requests parishioners provide offerings to their home churches during this difficult time. They may also donate to Neighbors in Christ, P.O. Box 71, Newville, Pa. 17241.

Kettering said they want people to feel the presence of the Lord. He added with the latest stay-at-home order issued by Gov. Tom Wolf for Cumberland County, he reached out to State Rep. Barb Gleim (R-199) who spoke with District Attorney Skip Ebert. Kettering said they agreed the services are a tremendous service to the community until the coronavirus pandemic is no longer a threat.

He did note that people exiting their vehicles during the service will not be tolerated at future gatherings.

“I make the announcement for people to remain in their vehicles to keep themselves safe, and to keep me and others leading the service safe,” Kettering added. “We want to follow the rules, and I will be making that announcement every week.”

The small-town services have garnered national attention with interviews given to TheWall Street Journal, The Washington Examiner, The New York Post, Philadelphia Inquirer, and even a television crew from Germany that is based in D.C.

“We are viral across the nation,” Kettering said.

He assured they will gather at the drive-in at 10:30 a.m. each Sunday through the pandemic, and different area pastors will lead the services. On Easter Sunday, April 12, they will partner with Kings Gap Environmental Center to hold its annual Sunrise Service at 7 a.m.

A special thank you was given to the Fire Police from Penn Township Volunteer Fire Co. who have been helping to direct traffic.

Sunday’s service began with 30 minutes of hymns, including “Amazing Grace,” and some contemporary songs:

“Your presence is an open door, so come now Lord, like never before.”

“Holy Spirit you are welcome here. Come flood this place and fill the atmosphere.”

Van Hussey began his sermon by thanking everyone for organizing the services, and introducing himself and his wife, Stephanie, who he said is a wonderful mother to their three children, and one on the way. He then encouraged everyone to turn to their significant other, take them by the hand and show them appreciation.

Citing Mark, chapter 4, Van Hussey said, “My main word is that Jesus is here with you!”

He noted that Jesus preached to a crowd in a boat, and a furious squall came up with waves bringing water into the boat.

Jesus was in the stern sleeping when his disciples woke him, asking why he wasn’t scared. Jesus rebuked the wind and the waves, and all was quiet. Then he asked them, “Why are you afraid? Do you still have no faith?” The disciples were terrified, and said, “Who is this that even the wind and waves obey him?”

“Number 1- Storms will happen in life,” he said. “Job loss, miscarriages, death, suffering. We live in a fallen world, unfortunately, and these things happen. Number 2-People panic and they will disappoint you. People are looking out for #1 a lot of the time when they get bogged down and troubled. Number 3-Jesus is still all powerful. And He will not abandon you in the storm, especially when people disappoint you. He will not leave nor forsake you.”

He said though we are facing many storms, Jesus is here for us and He cares for us.

He ended with encouragement to those gathered to pray for co-workers, or send encouraging emails or messages reaching out to friends and family.

“Perfect love casts out all fear, and Jesus is perfect love,” he concluded.

Kettering said when our hearts are overwhelmed, we can pray and ask the Lord for help, no matter what church we go to.

Kettering said the drive-in services are meant to bring hope.

“If we can help people and bring the stress level down, I think we have done the will of God.”

Notice of Public Hearing for Zoning Variance The Zoning Hearing