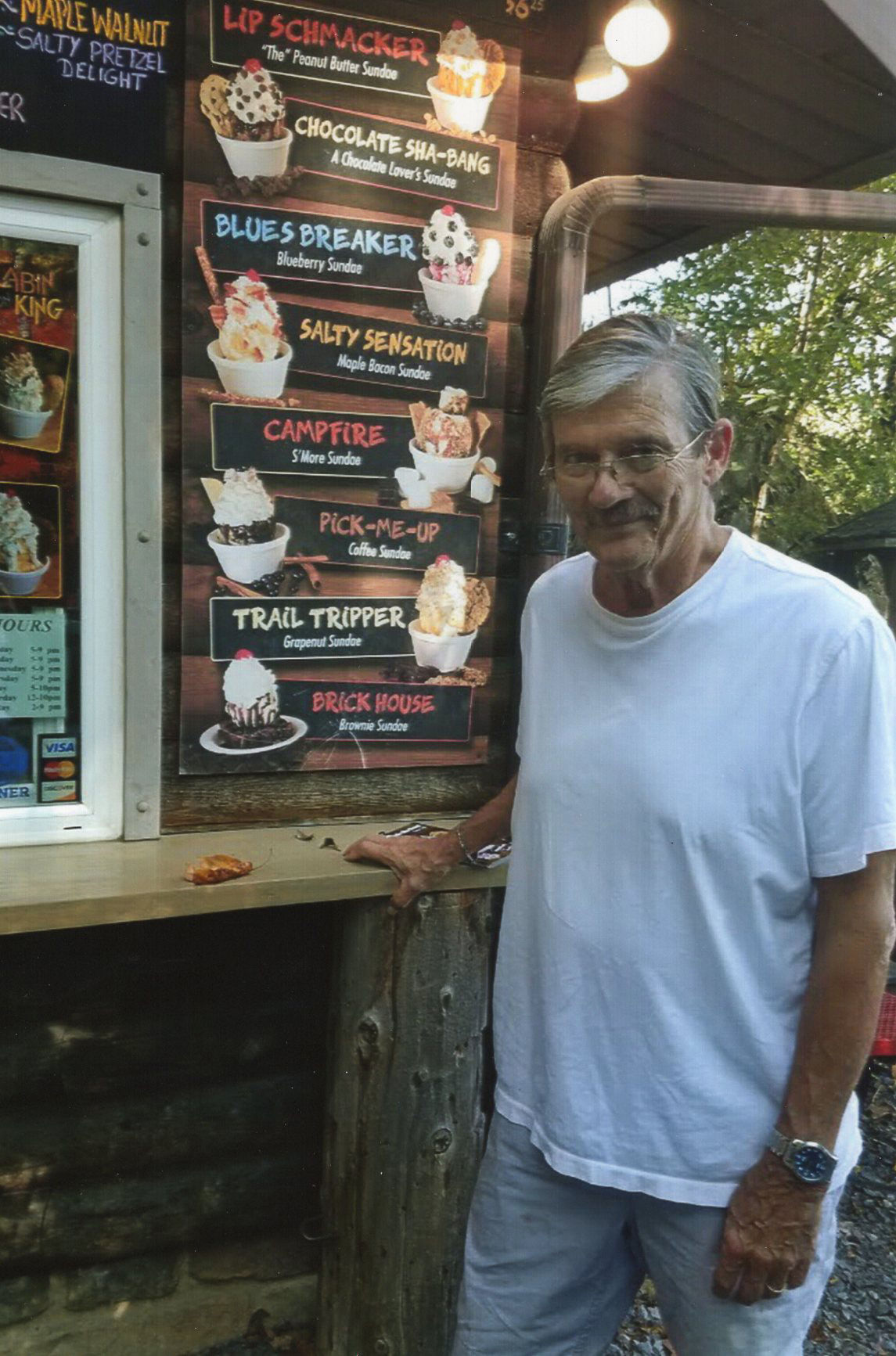 William ‘Bill’ Wolfe Sr. enjoyed a visit to Cabin on King in Shippensburg with his grandsons as a gift for Father’s Day a few years ago. Bill, the former Shippensburg Borough Manager, passed away Tuesday, April 30. 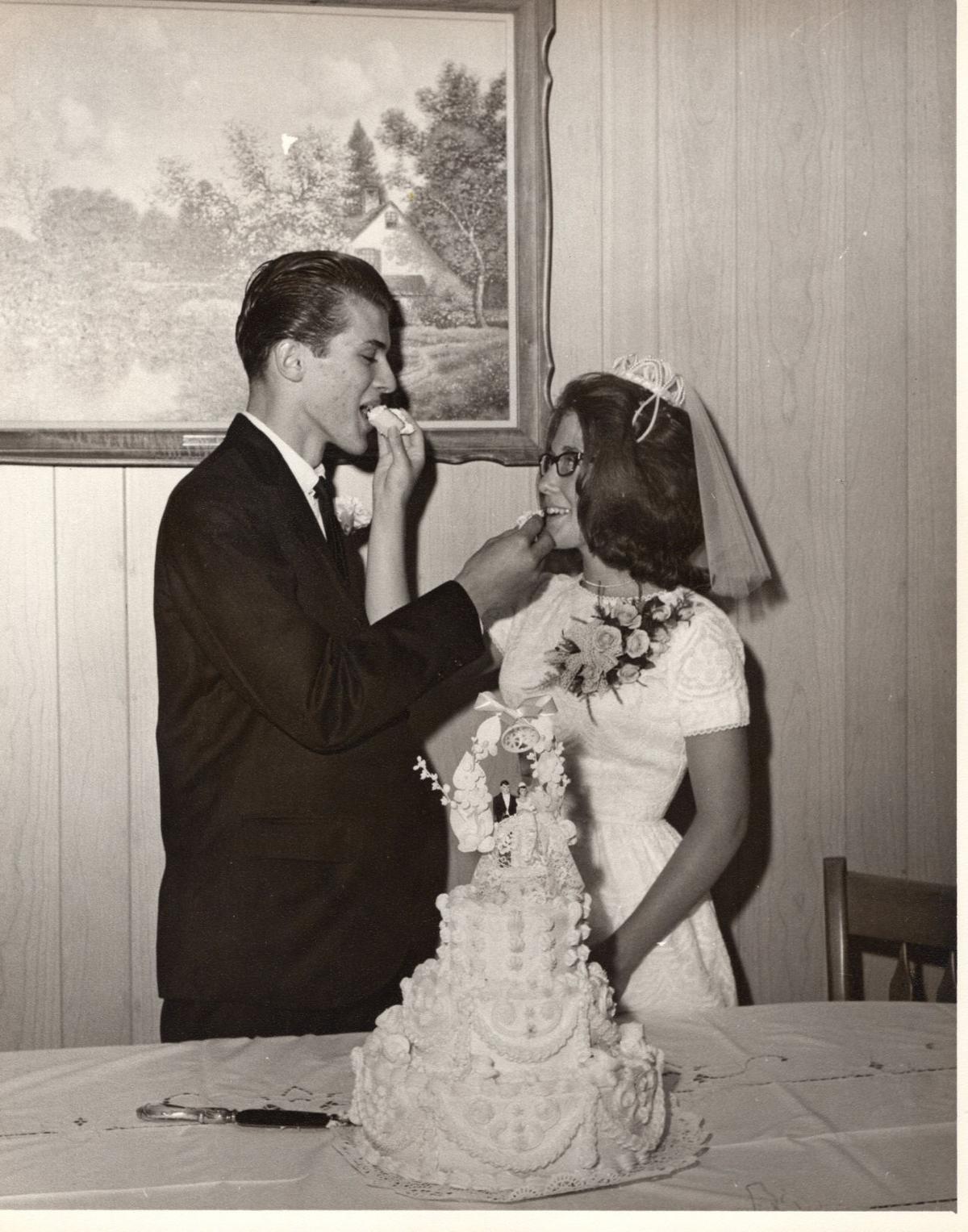 William ‘Bill’ Wolfe Sr. and his wife, Linda, celebrate their wedding day on June 21, 1964, as they feed each other their wedding cake at Linda’s home in Shippensburg. Bill passed away Tuesday, April 30. 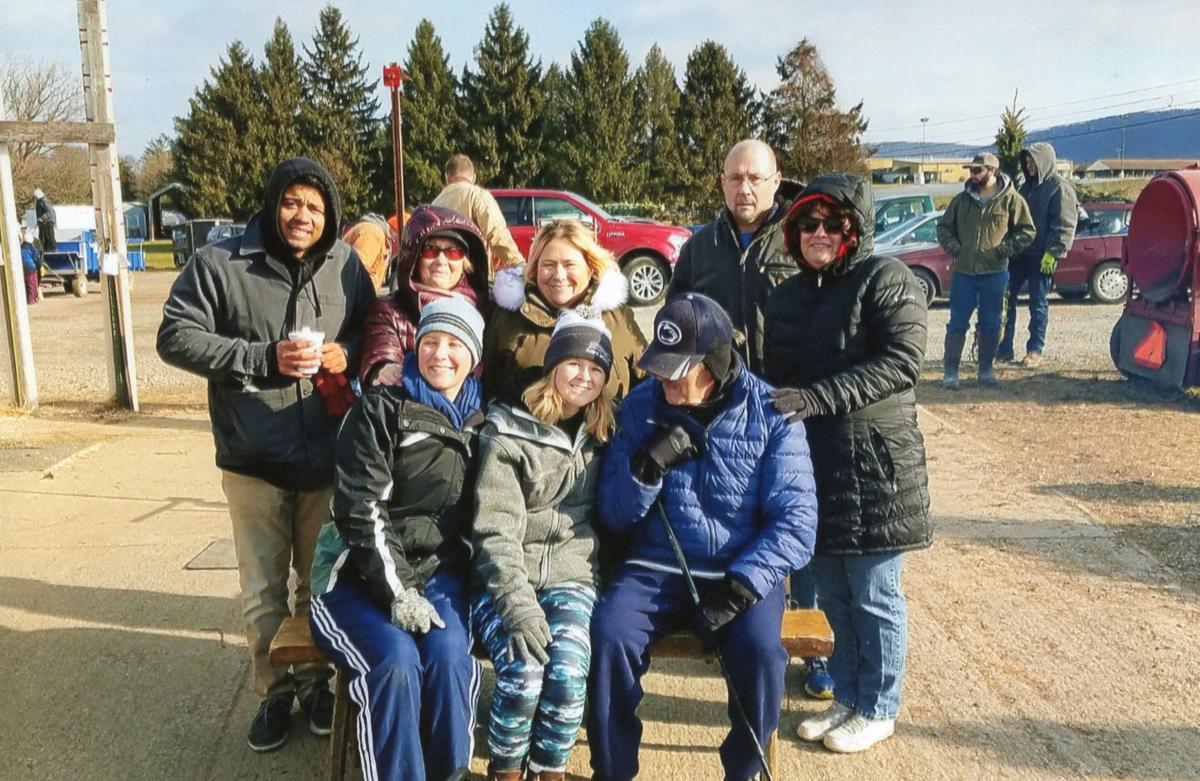 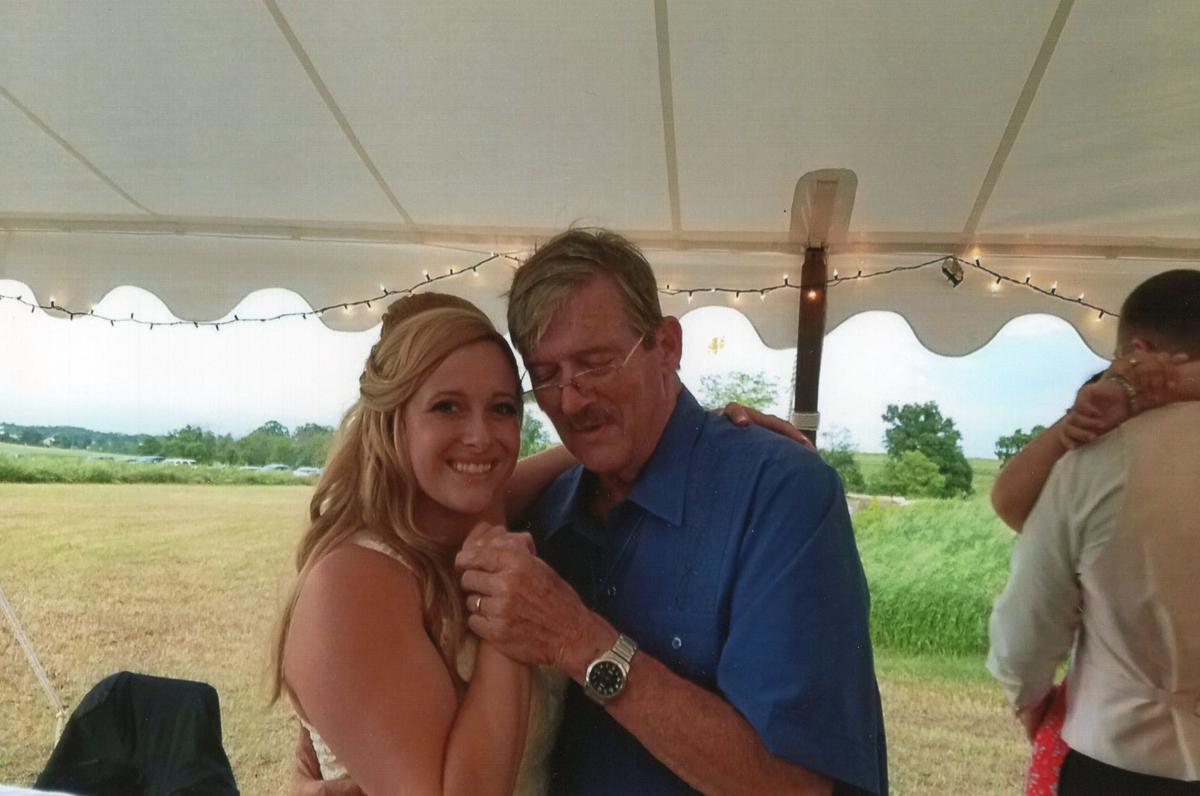 William ‘Bill’ Wolfe Sr. dances with his granddaughter, Keri Herb, on her wedding day a year ago. Bill passed away Tuesday, April 30.

William ‘Bill’ Wolfe Sr. enjoyed a visit to Cabin on King in Shippensburg with his grandsons as a gift for Father’s Day a few years ago. Bill, the former Shippensburg Borough Manager, passed away Tuesday, April 30.

William ‘Bill’ Wolfe Sr. and his wife, Linda, celebrate their wedding day on June 21, 1964, as they feed each other their wedding cake at Linda’s home in Shippensburg. Bill passed away Tuesday, April 30.

William ‘Bill’ Wolfe Sr. dances with his granddaughter, Keri Herb, on her wedding day a year ago. Bill passed away Tuesday, April 30.

William “Bill” Wolfe Sr., longtime Shippensburg Borough employee and former borough manager, absolutely loved everything about amusement parks, whether it be the cool ice cream on the tip of the tongue, or sitting in the front car of a speeding roller coaster.

“He would open the park, and he would close the park,” said Linda, his wife of more than 50 years.

The 1965 graduate of the former Shippensburg High School began his 36-year career with the borough on March 6, 1973, as a laborer at the Wastewater Treatment Plant and eventually worked his way up to assistant borough manager.

He later was hired as the borough manager, and retired June 30, 2009. The borough is planning to place a bench and plant a tree in memory of Bill. The location is yet to be determined.

Bill and Linda are both Shippensburg area natives. They met in school, and were married June 21, 1964. They would have celebrated their 55th wedding anniversary this month.

“If he would have traveled the world, it would have been on a roller coaster,” Linda said with a chuckle, beside their mini GoldenDoodle named Bay. “I personally preferred to stay on the ground.”

No matter how scared they might be, Bill coaxed his family to travel along with him on the newest rides, whether it be at Knoebels, Hersheypark or Six Flags Great Adventure. And, he provided some of his grandkids with their very first ice cream. He shared his interests and passions with everyone he knew, as a father, grandfather, husband and friend.

The list was long, and did not consist of a lot of standing around. He loved to dance, and Linda said he invented his own style that could not be replicated. One of the last places she saw him celebrate and break out some moves was their granddaughter, Keri Herb’s, wedding about a year ago.

“He could out-dance anyone,” she noted.

Bob Weaver grew up with Bill in Shippensburg, and hired him as a laborer at the borough’s Wastewater Treatment Plant. He remembers spending their teenage years during the late 1960s, early 1970s at the old eateries of Shippensburg, like at the Sugar Bowl listening to music from the jukebox, or the Varsity Shop, enjoying the famous grilled sticky buns.

Bill loved to camp, and his ideal setting included a canopy, campfire and lots of cooking, Linda said. The family would take regular trips to Knoebels in Elysburg. Bill also enjoyed taking beach trips where he was never afraid to ride the waves.

For his 70th birthday, the family went for a fun dinner at Red Robin. Within the next few days, his two sons brought along their campers, and the family, along with most of his six grandchildren and traveled out to Mountain Creek Campground in Gardners where they continued to celebrate his birthday with lots of fun, laughter, cooking and, of course, cake.

Most also knew Bill to be one of the biggest Phillies, Eagles and Penn State fans you'll meet, and he always found time to attend the sporting events of his grandkids, whether it be baseball, wrestling or softball. He loved to garden in his backyard, and Linda said he grew many different plants, and no matter which type, they always turned out pretty.

He taught his kids and grandkids the traits of never giving up and always working hard. He also passed along passions that they could share with their own kids, like cooking and grilling with the warmth of the people they loved most. And, it was competitiveness -- the love of winning -- that also got others’ attention.

However, Linda said her husband would have noted one of his biggest accomplishments in life was in the 1970s when he decided to accept the Lord into his life.

Linda attended church often and one day, Bill told her that they would be going to church together the next day. He was a member of the Immanuel Fellowship Church.

“He was a man of faith and that faith was evident in all aspects of his work and family,” said Grace Keiter, who worked in the borough for more than 40 years. She noted his faith made Bill very approachable and he was someone who could always detect if something was not right with a person.

“He was just always there,” Keiter said. “I felt like he was someone you could go to.”

She added, “If he was having a bad day, he wouldn't bring it to work.”

Linda said her husband was “very much a self-made man.”

New advances in the world did not pose an obstacle. Linda recalled Bill never allowing himself to say that he couldn’t do something -- one example being with the computer, which he taught himself to use. Bill also made working in the borough, more than work.

Keiter recalled Bill always asking about what dessert was to be available in the office at the office’s monthly potluck lunch. Of course, he was hoping for ice cream.

There were also memories from Christmastime. Keiter said the office gave Bill an Eagles jacket as a Christmas gift in the early 2000s -- not knowing the team would rise from the “cellars” to win the Super Bowl in 2018. Deanna Rhinehart, who first met Bill in 1989 while he was working as assistant borough manager, recalled memories of the annual Christmas party where he would make each worker sing a part of the “12 Days of Christmas.”

The Wolfe family even cut down their own Christmas tree every holiday season.

Bruce Hockersmith was a member of borough council when the board approved Bill as borough manager after going through a “merry-go-round” at the position.

“We finally realized that for Shippensburg, we need somebody from the area who understands the area, and the nature of the people that you are dealing with,” Hockersmith said. “Bill knew what the job was, and did it.”

Current Borough Manager Kevin Plasterer said Bill took pride in his work. Plasterer was a little kid at church when he first met Bill, and ultimately ended up working under his mentorship.

Plasterer described Bill as someone who was always willing to listen and always backed his employees.

“I feel he used common sense, a lot of people do and some people don't,” he said. “I think he was level headed, and he listened to everybody that had suggestions.”

Rhinehart said Bill was “one of my favorite people to work with.” He had what she called a “rare” quality for a boss.

“I respected him as my boss, but also as a friend,” she said. “He treated you like he cared about you.”

Weaver defined Bill as “reliable” and a “good worker.”

“He was a good guy. I was never sorry that I hired him,” he said. Weaver also was a customer of Bill's when he cut hair at Gary Hershey’s Barber Shop. Among many other pursuits of Bill, he was a licensed minister, and worked with the youth at numerous churches. He was also a Boy Scout and Webelo leader of Boy Scout Troop 121. He was a past treasurer and board member of Downtown Organizations Investing Together (D.O.I.T.) and was a past president of the Shippensburg Wrestling Booster Club.

Just like his family, Bill will forever be in the heart of Shippensburg.

Public Notice The Hopewell Township Board of Supervisors would like