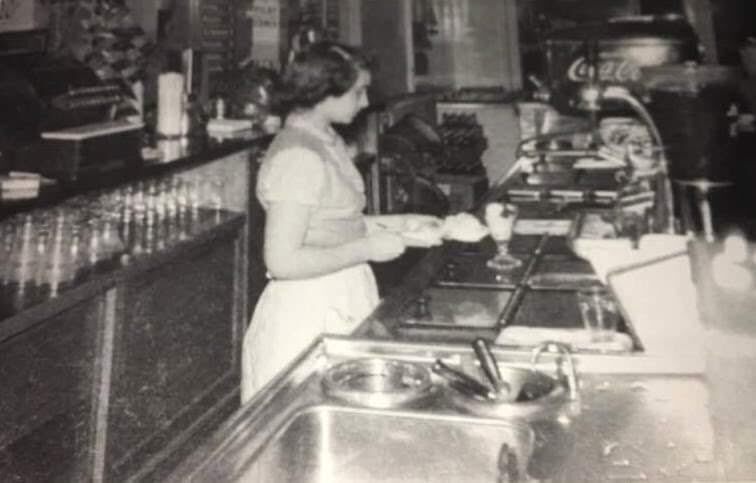 Joan Long was 17 years old in this photo taken by Charlie Pague. Long worked at the Varsity Shoppe in downtown Shippensburg when she was a junior in high school, where serving ice cream and fountain favorites was part of her job!

Joan (Long) Kriner, formerly Joan Thomas, holds her senior picture from 1950. Kriner used to own The Varsity Shoppe in downtown Shippensburg with her former husband, the late John Thomas. 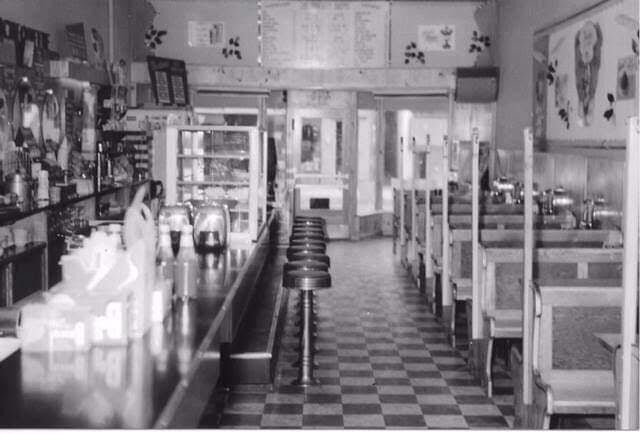 The popular Varsity Shoppe of the 1950s was located on East King Street, just down the street from where Orrstown Bank is located now. The inside looked much like you would expect a soda/fountain shop to look back then. Note the checkerboard floors and the booths that lined the one wall! 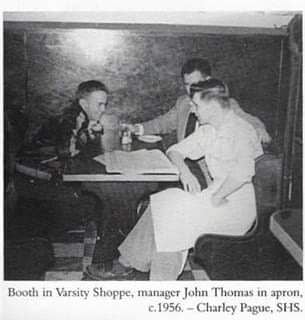 The late John Thomas (in the apron) managed the Varsity Shoppe prior to marrying Joan Long in 1951. He is pictured here chatting with some of the guys who frequented the popular establishment after school. John and Joan were friends to all of the kids who made the Varsity Shoppe a popular hangout!

Joan Long was 17 years old in this photo taken by Charlie Pague. Long worked at the Varsity Shoppe in downtown Shippensburg when she was a junior in high school, where serving ice cream and fountain favorites was part of her job!

Joan (Long) Kriner, formerly Joan Thomas, holds her senior picture from 1950. Kriner used to own The Varsity Shoppe in downtown Shippensburg with her former husband, the late John Thomas.

The popular Varsity Shoppe of the 1950s was located on East King Street, just down the street from where Orrstown Bank is located now. The inside looked much like you would expect a soda/fountain shop to look back then. Note the checkerboard floors and the booths that lined the one wall!

The late John Thomas (in the apron) managed the Varsity Shoppe prior to marrying Joan Long in 1951. He is pictured here chatting with some of the guys who frequented the popular establishment after school. John and Joan were friends to all of the kids who made the Varsity Shoppe a popular hangout!

In the 1950s, teenagers would leave Shippensburg high school and head to the soda fountain known as The Varsity Shoppe along East King Street.

The popular hangout created lasting memories for those who walked inside and across the black-and-white checkerboard floors, and grabbed a seat along the counter or in one of the many booths that lined the right wall.

Older generations might remember enjoying the tasty foods the shop offered, including some yummy ice cream on hot summer days. High school sweethearts possibly enjoyed many date nights together at the hangout, and many friends strengthened their bond over a refreshing soda or two.

In my last offering of Blast From the Past, I wrote about a contest to name the high school’s Greyhound mascot, and we learned that Mrs. John Thomas came up with the winning name of Booster. I had no idea this young woman and her then husband were the owners of The Varsity Shoppe in the early 1950s. Over the past few weeks, I have learned a lot about this popular establishment and Mrs. Thomas.

Let’s take a walk down Memory Lane, shall we?

When I heard stories about The Varsity Shoppe, I always envisioned a 1950s-era mom-and-pop shop, similar to Arnold’s on the sitcom “Happy Days” -- a burger joint where all the local cool kids hung out after school to drink root beer floats and ice cold Coke while talking about the upcoming football game on Friday night. As it turns out, the picture I had painted in my mind wasn’t too far off from the photos.

Mrs. Joan Kriner shared with me as she reminisced about Shippensburg’s heyday.

Ms. Joan Long hailed from Fayetteville, North Carolina. She came to Shippensburg with her family in 1948 after her father retired from the U.S. Army. She began working at The Varsity Shoppe when she was a junior in high school. John Thomas was managing the small, but very popular, establishment at the time. Prior to her employment at The Varsity Shoppe, Joan was working at Miller Reed Dairy at their fountain/soda shop where she served sodas and ice cream. “I was making 25 cents an hour at Miller Reed, and my friend lured me to The Varsity Shoppe for a nickel more an hour,” she laughed. “A nickel was a nickel back then, and it was our responsibility to work, and 30 cents an hour was better than 25 cents an hour!”

Thomas was three years older than Joan, and while working for him at The Varsity Shoppe, the two became friends. After Joan graduated in 1950, she went to work for Mr. William Mark, the Cumberland County District Attorney in Shippensburg. John continued to manage The Varsity Shoppe, and in 1951, Joan and John were married. In 1956, they took a big step and decided to purchase The Varsity Shoppe from Alvin and Vonnie Sixeas for $10,000.

“That was a lot of money back then, but that’s what we needed to borrow to buy the Shoppe and to make sure we could get supplies and keep everything going,” Joan explained. “We headed down to The First National Bank on the square and signed on the dotted line, and became the new owners of The Varsity Shoppe.” They also paid $100 a month rent for the Shoppe to Frank Hollar because the shop was located in the Hollar Building.

Listening to Joan describe The Varsity Shoppe, it was just as I had imagined. Checkerboard floors, soda fountains, booths that lined the walls, ice cream dishes, Coke, and memories of high school days both past and present. “It really was a neat place for the kids to hang out, and they respected us,” she noted. “Everyone liked us and we liked them. We treated each other with respect, both the kids and the grownups. If someone did get out of line, I would just ask them to leave and not come back for a few days, and they would go peacefully and stay away until they were allowed to come back.” She laughed as she told the story about the pinball machines that were located in the back of the shop. “Only the guys could play pinball, and they had to be 16 years old to play - no exceptions. Every now and then, we’d get someone who would kick the machine and tilt it. That was grounds for being asked to leave.”

She said back in those days, the college only had the one dining room.

“They didn’t have the CUB or anything like that in the ‘50s, so the college kids would come to The Varsity Shoppe. We had a good mix of college kids and local kids all the time, and everyone got along,” she said. “In fact, each year we would have a guy by the name of Andy Winters come down from Harrisburg and paint the walls, one side in Shippensburg State College colors, and the other side in Shippensburg Greyhound colors. He did a great job for us and the kids really enjoyed it, too.” She said working at the shop and then actually owning it and being part of the kids’ lives in that way was so much fun. In addition to Mr. Winters painting and decorating the shop on the inside, he would also create and decorate a float for the college homecoming queen to ride on in the parade each year.

Imagine heading to The Varsity Shoppe after school, ordering a cheeseburger and dancing to the jukebox, which Joan said was always playing.

They didn’t have paper menus when she and John owned the shop. The menu was printed on the front wall directly above you as you came through the door. “We had 5 cent Cokes and 25 cent cheeseburgers, and that included mayo, lettuce and tomato,” she chuckled. “We also sold ice cream, of course, and milkshakes, root beer floats, candy bars and all kinds of stuff the kids liked back then.”

She enjoys telling the story of how she and John were the first establishment in Shippensburg to make subs. “Andy Fry went to a Penn State football game one Saturday afternoon and brought back a ham & cheese, and an Italian sub in a lard can. He brought them back to show John and me to see if we would

be interested in making them there in the Shoppe.” She said once they started making them, they became a big hit in Shippensburg. “We would get sub rolls from Valley Pride and all of our meats and cold cuts from Harglerode’s Meat Market right down the street. We would just call down and tell them what we needed, and not long after, someone would bring our order to the Shoppe and drop it off; you can’t do that today,” she laughed.

My heart smiled inside as Joan talked about the kids back then because I could hear the joy in her voice as she described memory after memory of days gone by.

“The guys would wear gabardine slacks that were usually navy blue or black or tan (something like khakis today), and always a button up shirt-tucked in,” she stated! “If they had a varsity sweater or jacket, they wore those, too, and they were proud of it! The boys could wear rolled up jeans, but only after school. The girls wore pleated skirts, A-Line skirts and poodle skirts, but nothing real tight and everything was below the knee! They also wore saddle shoes and Bobbie socks.”

Of all the Blast stories that I have written to date, I would have to say this is probably the one that I have looked forward to the most. The nostalgia of the era, the high school ties and the Happy Days atmosphere just pulled me right into where I wanted to know more!

Being introduced to Joan and talking with her, I learned so much about what school life was like in the 1950s. To have the pleasure of listening to her describe what it was like to be a student, and then to learn about one of the most popular hangouts in Shippensburg has just been a very unique experience for me, and one that I will always cherish.

Thank you Joan, for inviting me into your home and being such a gracious tour guide for the stroll down Memory Lane that we shared together.

Joan is a wonderful source of information when it comes to Shippensburg in general. She has so many memories to share. Stay tuned for my next Blast from the Past when I’ll return to high school days from the early ‘50s…you just might learn something!

PUBLIC NOTICE The Board of Supervisors of Hopewell Township, Cumberland