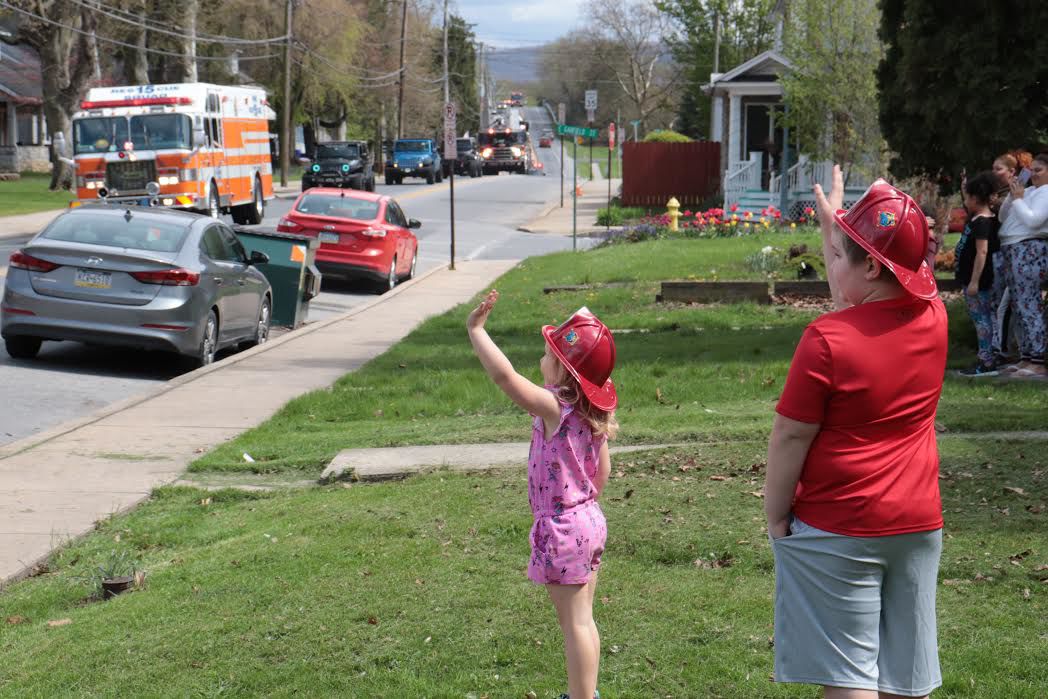 Liam Pentz, 8, of Shippensburg was extremely excited to have his own personal parade of firetrucks, police cruisers and local vehicles sound their sirens and horns Saturday in celebration of his birthday. 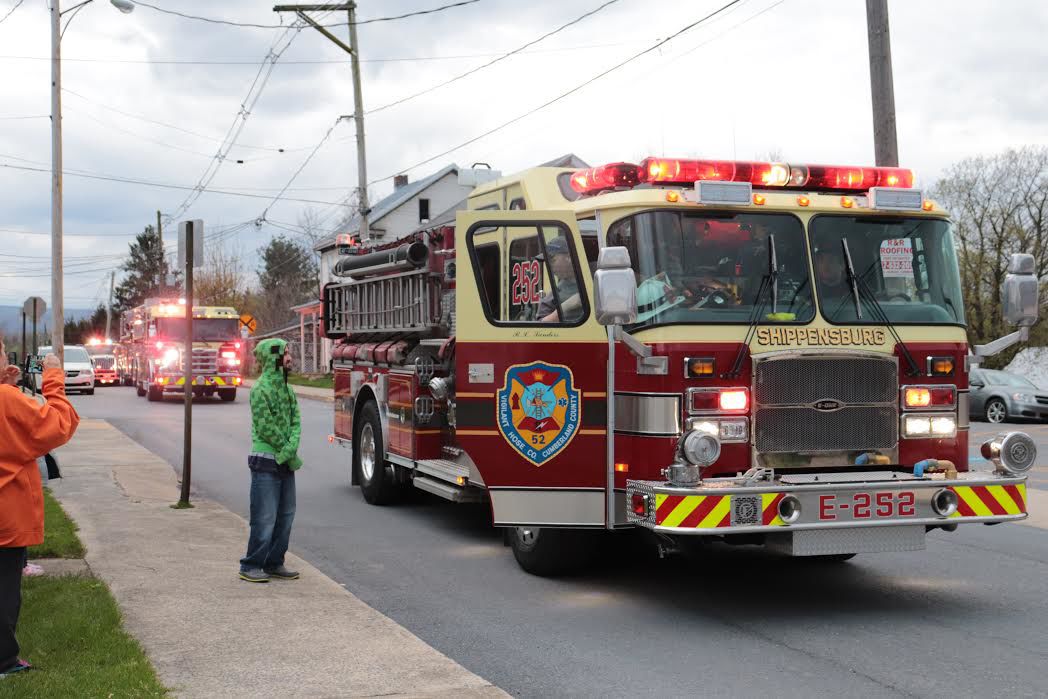 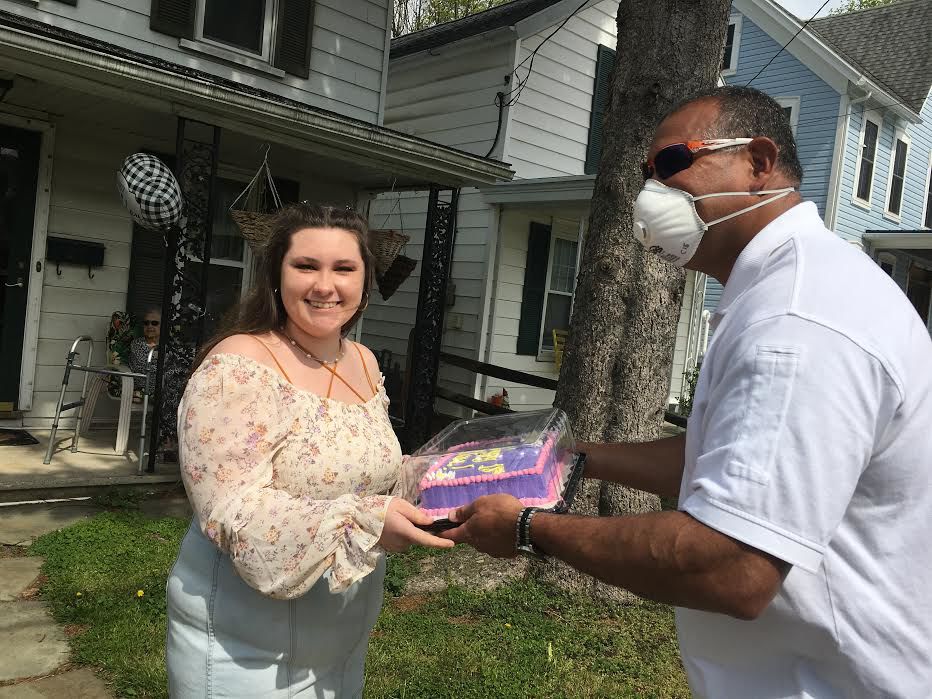 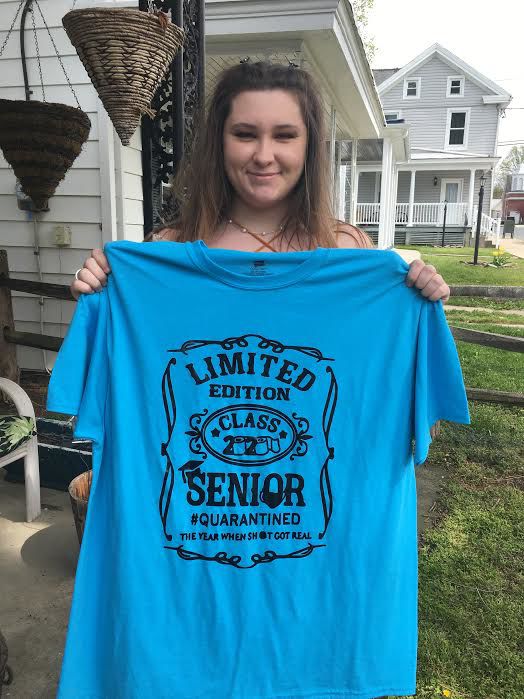 Larissa Mowrey turned 18 Saturday, and she was given a surprise parade of firetrucks, police cruisers and local vehicles to help her celebrate. She is pictured holding a humorous quarantine T-shirt given to her by her best friend, Megan Laird.

Liam Pentz, 8, of Shippensburg was extremely excited to have his own personal parade of firetrucks, police cruisers and local vehicles sound their sirens and horns Saturday in celebration of his birthday.

Larissa Mowrey turned 18 Saturday, and she was given a surprise parade of firetrucks, police cruisers and local vehicles to help her celebrate. She is pictured holding a humorous quarantine T-shirt given to her by her best friend, Megan Laird.

Being under a stay-at-home order is especially tough when you hope to celebrate your special day with friends and loved ones.

Shippensburg area first responders and local residents have been working to make some birthdays even more memorable during these difficult times by parading past their homes, with sirens and horns ablazing.

Residents in the east end of town stood outside along South Queen and South Washington streets Saturday afternoon to cheer on 8-year-old Liam Pentz, son of Sara and Adam Pentz, and 18-year-old Larissa Mowery, daughter of Teena Mowery and Troy Mowery, for their special day.

The convoy gathered in the Giant parking lot on Baltimore Road Saturday afternoon before heading past a beaming Liam, who was sporting a red plastic fireman’s helmet, his family and their neighbors, all waving and smiling.

The line of vehicles headed onto King Street, and to Larissa’s grandparents’ house on South Washington Street to surprise her. Tears filled her eyes as she was given a cake by her neighbor Jamie White, chief of West End Fire & Rescue Co., along with flowers, balloons, cards and a blue quarantine T-shirt to jokingly remember how their senior year has gone down the toilet.

Teena Mowrey said she did not expect such a great turnout for the parade.

“Jamie is our neighbor, and I asked him if they could do something to make her birthday special,” Mowrey said. “She’s been a mess with missing out on the end of her senior year, and a graduation party. I just wanted one truck and a couple of our friends to drive past! I just think it’s an amazing thing that these companies came together and did all of this. My best friend is in a Jeep group on Facebook, and a post was made there. A lot of my friends drove from Mercersburg and St. Thomas, just for a two-minute drive-by.”

Mowery said when conditions improve, they would like to hold a bigger birthday/graduation party for Larissa, and hopes the Class of 2020 will eventually be able to have a proper graduation.

“This is happening all over the county and in other states,” White said. “We are more than happy to bring happiness to people who can’t traditionally celebrate their birthdays right now. All Shippensburg emergency services are represented here today. We will do this as long as we can. It depends what we have going on. People are requesting the parades through Facebook or calling one of the stations. We ask that people consolidate the birthdays over the next few weeks so we can do several in one day.”

The departments also did a parade for Patrick Pulley Saturday evening. The parade was supposed to be held Sunday, but it was rescheduled due to the forecasted rain.

Larissa was shocked when she heard the sirens going past Saturday.

“I wasn’t expecting it,” she said. “This was really a nice surprise!”

Larissa said it has been tough for the seniors having to miss the end of the school year with their friends and fellow classmates. She said she keeps in touch with her friends as much as possible.

She will attend HACC in the fall to become a Registered Nurse.

Larissa’s grandmother, Dorothy Hartman, said she liked what the departments did for Larissa and the other birthdays.

“This is the most action we’ve had on this street!” she quipped.

A few streets over, Liam was still celebrating his 8th birthday with his family. His grandmother, Kim Rill, contacted the fire department to hopefully get something done for Liam since he had to cancel his birthday party.

“He was kind of down, and I wanted to do something to cheer him up,” Rill said.

Liam told his family that this was his best birthday ever! Not only did he get the parade, but he also got a trampoline and a vintage Darth Vader piggy bank, among other gifts.

His mom, Sara, also made his requested dinner of shrimp alfredo.

“This is better than any birthday I’ve ever had,” Sara said, with a laugh.

“I am so grateful! I cried, and it’s not easy to make me cry,” Sara added.

“Yes, we love how the community came together during these hard times,” Kim added.

ADMINISTRATRIX'S NOTICE Matthew A. Mitchell, deceased Notice is hereby given

EXECUTRIX NOTICE Letters Testamentary in the Estate of Helen M.

Part time head milker on a 600 cow dairy in