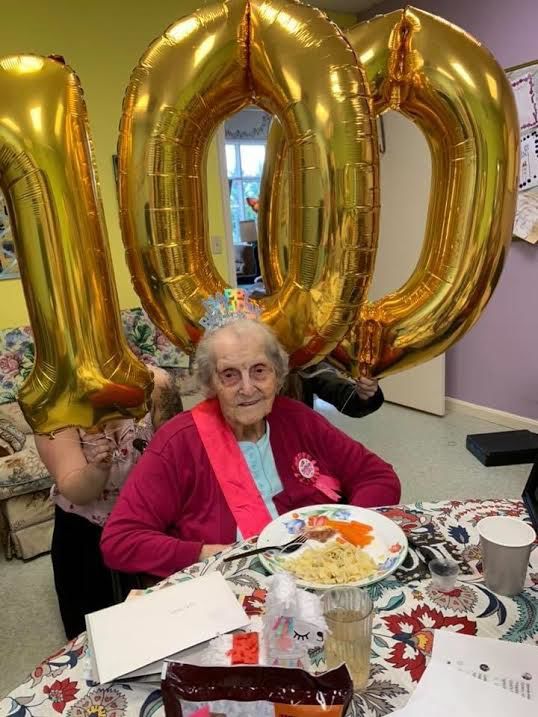 Velma Burkholder, a resident of Orrstown Personal Care Home, celebrated her 100th birthday Monday in style with a party, giant balloons, flowers, cards and a cake made by her granddaughter. 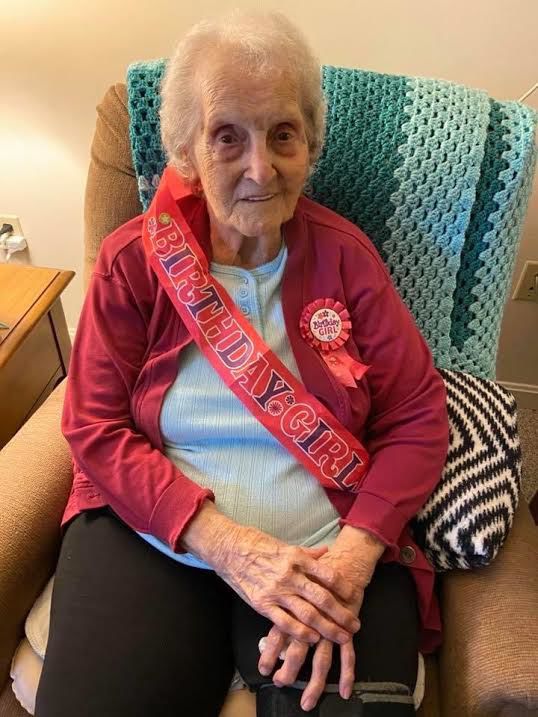 Velma Burkholder is happy to wear a Birthday Girl sash at Orrstown Personal Care Home where she celebrated her 100th birthday on Monday. 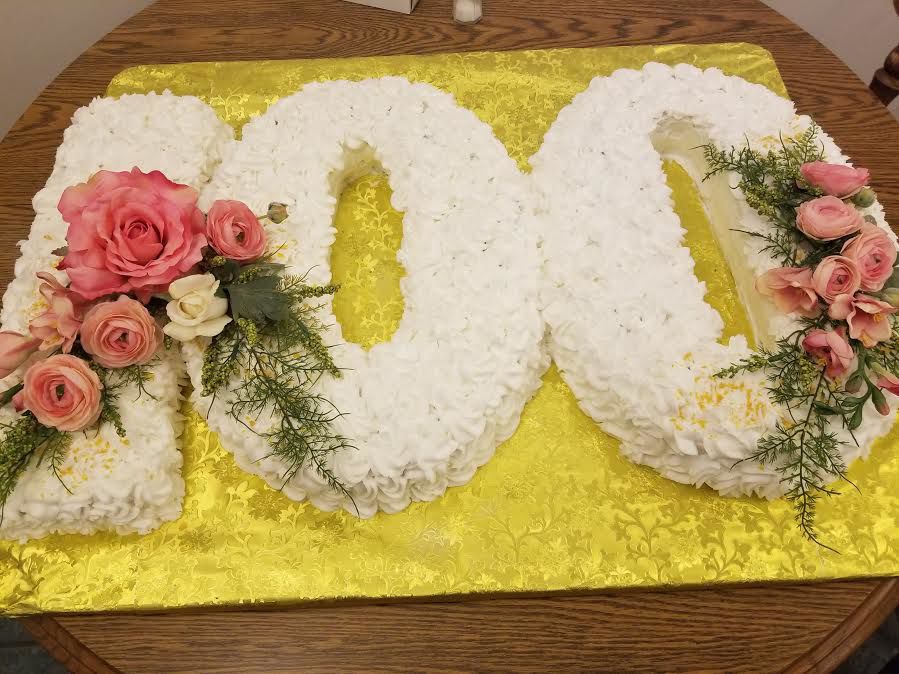 Brenda Houck Bailey of Shippensburg made this stunning cake for her grandmother, Velma Burkholder, in honor of Velma’s 100th birthday Monday. Velma celebrated the milestone with a grand party that even included a few family members for a short time.

Velma Burkholder, a resident of Orrstown Personal Care Home, celebrated her 100th birthday Monday in style with a party, giant balloons, flowers, cards and a cake made by her granddaughter.

Velma Burkholder is happy to wear a Birthday Girl sash at Orrstown Personal Care Home where she celebrated her 100th birthday on Monday.

Brenda Houck Bailey of Shippensburg made this stunning cake for her grandmother, Velma Burkholder, in honor of Velma’s 100th birthday Monday. Velma celebrated the milestone with a grand party that even included a few family members for a short time.

If you ask Velma Burkholder what her secret to longevity is, she really isn’t sure what the answer is, except that she is very blessed.

Burkholder celebrated her 100th birthday Monday with a grand party thrown for her in the Orrstown Personal Care Home.

Burkholder was born on April 13, 1920, in Lower Mifflin Township, to William Edward Bailey and Pearl Irene Jumper. One of 15 children, Burkholder said she was the second oldest, and there are still four siblings living today: herself, her brother, Bill, and twins, Ralph and Raymond.

The Bailey family lived on Middle Road in Lower Mifflin Township. William was a carpenter and Pearl took care of the children.

“I walked to school every day. Now, the school is a house! I only attended school through 8th grade. At that time, you had to pay if you wanted to go to high school. Everything has changed since then!”

Once she finished school, Burkholder helped to take care of her family. Some of her favorite memories from childhood are spending time with her family.

“We all got along really well!” she said. “Some families have one or two children, and they can’t get along. But, we always did!”

She recalls playing outside a lot, and playing ball. She noted families didn’t really travel much back then.

A few years later, she met her future husband, Earl J. Burkholder, a milk hauler who also lived in Lower Mifflin Township. The two were wed in 1937. Earl served with the U.S. Air Force during World War II, and was a self-employed mason. Burkholder said he also worked at Letterkenny Army Depot.

After she was married, Burkholder said she worked at the former C.H. Maslands and the former dress factory in Newville. “There’s nothing left anymore,” she said of the once thriving businesses.

Once she and Earl started their family, she stayed home to care for their four children -- Ray Burkholder, Doris Houck, Linda Wilt and the late Robert Burkholder.

The Burkholders lived in Newville and Lower Mifflin Township throughout their 63-year marriage. Earl sadly passed away in 2001, at age 83.

Burkholder recalls going to a few movies in Newville and Carlisle with her husband, but said she never really cared for movies.

Her granddaughter, Brenda Houck Bailey of Shippensburg, baked Burkholder’s cake for Monday’s celebration. The marble cake, in the shape of the numbers 100, was beautifully decorated with icing flowers.

“We always gathered for many years at her house for all holidays. We never ate a meal without thanking God for all our blessings. You never pushed away from the table feeling hungry. Grandma was a hard-working Christian farm lady. Her house was the cleanest house around. It wasn’t clean if the windows weren’t done every week. When my grandfather was still living, they would put in a big garden. I remember as a child walking behind Pap’s tractor when the time came to plow up the potatoes. I was honored to have the opportunity to make both my Grandmothers a cake for their 100th birthday. Grandma Bowen died at the age 103, so will Grandma Burkholder surpass her!”

Burkholder was surprised to be given a big party for her birthday Monday. She said the room was decorated beautifully, and she was even able to see a few of her family members for a short time. She received more than 50 birthday cards from many people, some of which she didn’t even know, and beautiful flowers from the staff members. She enjoyed a nice dinner and some of her cake.

“I had a good birthday! It tired me out!” she laughed.

Nowadays, Burkholder can still get around with a walker, and thanks the Lord for the abilities she still has. She also enjoys doing word searches and puzzles.

As for the condition of the world today, she feels it’s in bad shape.

“I think the world is in terrible shape today. I think the Lord is trying to tell us something, and we’re not listening.”

Her advice for younger generations is simple: work hard.

“My children work, and my husband and I worked. Nowadays, a lot of children don’t want to work. They’d rather play games on these machines. It’s not like it was when I was a kid. I wish it would get back to like it was, but I don’t think it ever will,” she said.

“The staff put together a very special day for her, and we may even have allowed a brief, social distancing visit from her daughters. I mean, how often do you get to turn 100? It’s not something you get to do over! But, when the day was over she smiled and said, ‘I had a good day.’ Velma dearly loves her family and enjoys sharing stories about all of them. Her memory is so incredible, you can ask her just about anything and she remembers it in perfect detail. She has seen happiness and she has seen her share of sorrow, but she has overcome it all with the support of her family and her faith in God. When I think of Velma, what keeps coming to my mind over and over is that she is just really a good person, and I don’t think she realizes what an impact she makes on the people around her just by being herself. She is always concerned and invested in the lives of the staff. For example, if someone goes on vacation, she worries about them while they are gone, asks if we have heard from them while they were away and then when they come back, she asks how their trip was. She always asks the staff about their children and how they are doing. Velma is a good person who we have had the privilege to get to know. We are very fortunate that she and her family chose OPCH and allowed us to be part of this stage in her journey of life.”

Happy birthday, Velma! Thank you for sharing your special day with us!