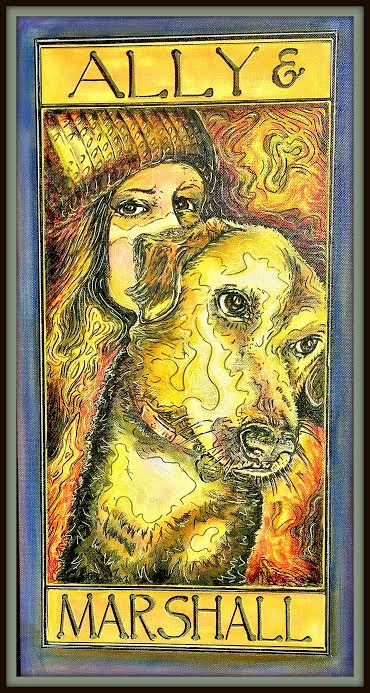 Sherre Bell of Shippensburg painted this piece entitled, ‘Ally and Marshall,’ that benefited the Harbor of Shippensburg. Bell is donating proceeds for her paintings to the town’s sober bar and safe place for those in recovery. 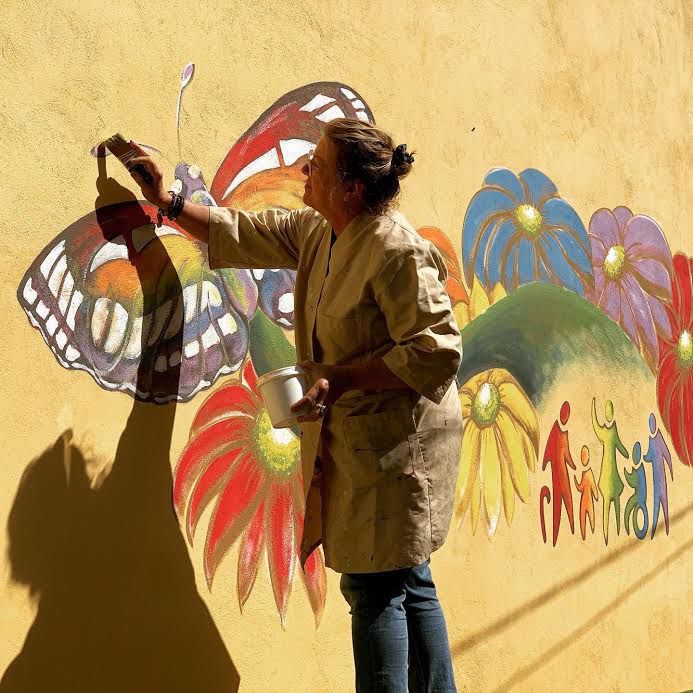 Sherre Bell of Shippensburg paints a mural, as a member of a mission team, at a family services center called Veritas in Sighisoara Romania. 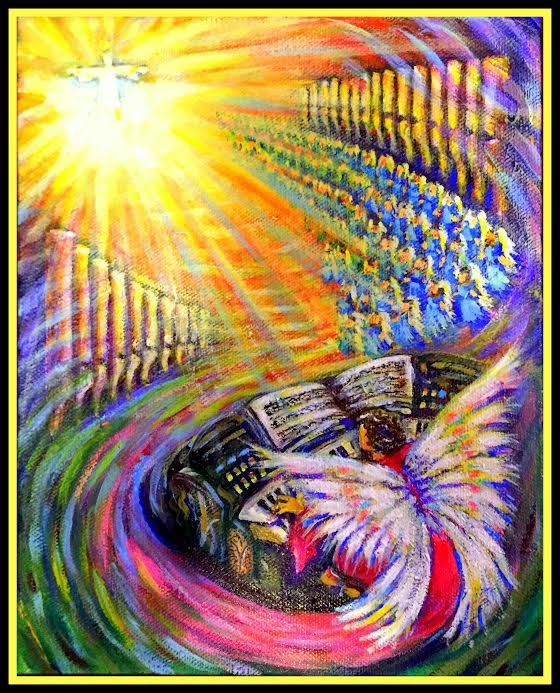 Sherre Bell of Shippensburg painted this piece entitled, ‘Singing Glory to God in the Highest’ of an organist as an angel who joined the heavenly choir. It was used for the cover of a funeral bulletin. 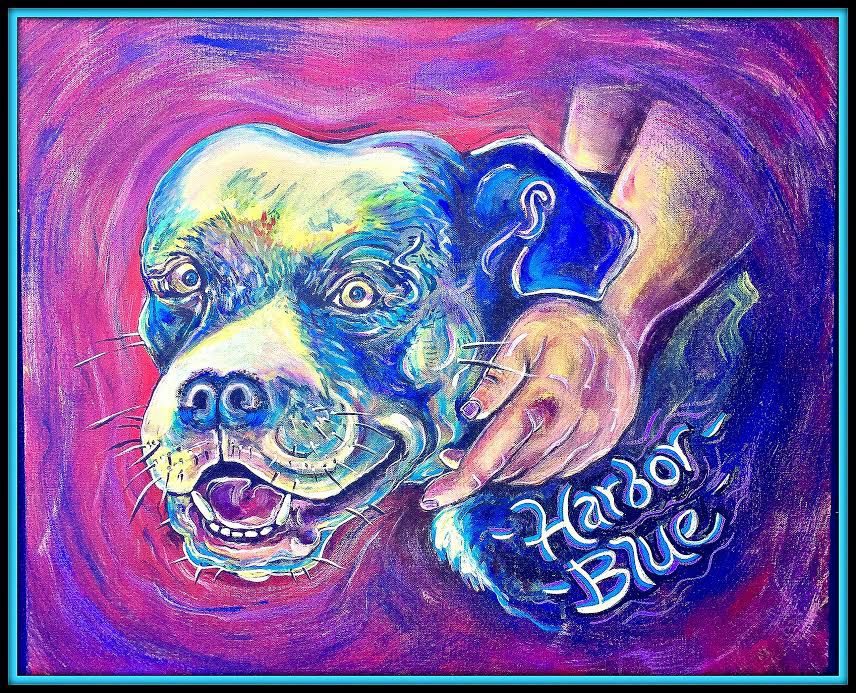 Sherre Bell of Shippensburg painted this piece entitled, ‘Ally and Marshall,’ that benefited the Harbor of Shippensburg. Bell is donating proceeds for her paintings to the town’s sober bar and safe place for those in recovery.

Sherre Bell of Shippensburg paints a mural, as a member of a mission team, at a family services center called Veritas in Sighisoara Romania.

Sherre Bell of Shippensburg painted this piece entitled, ‘Singing Glory to God in the Highest’ of an organist as an angel who joined the heavenly choir. It was used for the cover of a funeral bulletin.

With strokes of a paintbrush, longtime artist Sherre Bell of Shippensburg creates beautiful pieces for local residents while also supporting a great cause.

Bell, who worked as an artist for the Department of Defense for many years, has decided to give any proceeds she makes from commissioned paintings to The Harbor of Shippensburg, a sober bar and safe place that caters to those in recovery.

Bell’s mother introduced her to The Harbor and she helped decorate its interior when it opened and expanded.

“I worked for the Defense Department for 35 years, half of those as an artist,” she explained. “I retired in 2015, and had back surgery. When I recovered, I decided to do mission trips so I could reconnect on a spiritual level and work for God. I was taken aback when I had a very strong realization that I had other things I needed to focus on and not focus on my art. I realized I had to focus on the relationships I have with others and myself, and my spirituality.”

Bell said she realized this when she was on a mission trip in Paraguay, painting murals.

“I was with a group of women who were artists and seamstresses, and I realized I focused on my art the whole time and not on the relationships with them. A few weeks later, I was invited back to help build a church. When I got there, they didn’t want me for my art, they wanted me to work on other things. During that trip, I was able to form lasting friendships and worked on my relationship building skills.”

The Shippensburg High School Class of 1978 grad has since visited Romania twice to paint murals, and was able to further her relationship building there.

Bell said around Thanksgiving, she decided she wanted to do artwork to benefit The Harbor.

“I love that the artwork means a lot to the people who want them, and I ask that they give a donation to The Harbor as they see fit. It always feels good to help people, and this helps The Harbor fulfill its mission,” she noted.

This has also helped Bell learn lessons on what is important and where your priorities are.

“I’ve found a lot of value and self-worth within my talent, which isn’t always the best place to find it,” she said. “I feel more comfortable doing my artwork now.”

She said it is especially important to her to support an organization that helps people who suffer from an addiction because her late husband was an alcoholic.

“Addiction is part of the community, and I think everyone is touched by it, either by family, friends or personally. I think communities have to have these services. I’m a Christian and I think it’s good for people to have that support there if they choose it.”

Bell has completed five pieces that benefited The Harbor, with two more in the works -- one of a little boy and his duck, and another with a little girl and her dog.

“I started out doing people’s pets,” she noted. “At first, I didn’t want to include people in them, but I finally started incorporating people into them. I did a piece with an angel organist for a pastor. That was so much fun and a challenge for me. I was so touched that they made a very nice donation for that.”

Bell said she doesn’t conform to any one particular style with her pieces, and bases her creations on the people who order them, and their interests and color schemes. For instance, one piece she did of a bunny was done with fabrics and laces, with a make-believe background.

Bell feels some talents just come naturally to people, and noted her mother was also an artist. When she was little, her mother volunteered with the historical society and would draw the buildings in town.

“I had a lot of practice,” she laughed. “It was an escape for me when I was little, just like it is now. You can escape into a world where you’re just creating and overcoming challenges.”

Bell added this has given her a sense of fulfillment, and “it eases anxiety when you’re not focusing just on yourself.”

“Spiritually, I think it’s good to be open to growing and learning to improve yourself,” she added. “Whether you’re giving of your gifts or talents or even financially, as long as your heart is in the right place and your motives are good.”

Melissa Mankamyer, pastor and founder of The Harbor, said, “I delight in those who give of themselves for the sake of another; there is no greater love for humanity than to give to a cause greater than yourself for the sake of another who is in need.  Sherre has been a supporter from the beginning; she poured herself out through her talents and passion believing in what we had to offer could and would actually change lives which, in turn, change our community. Sherre has witnessed true transformation in the lives of men and women, and continues to find ways to support our efforts in fighting the addiction problem in our part of the world. Beyond her artistic abilities, she has helped by participating in our chili cook-off, our Lip Sync Contest, and murder mystery dinners. We need more people like Sherre to find ways that support our efforts. I have been saying all along, ‘May our mission be your mission,’ and that The Harbor is for the community and needs to be supported by the community.”