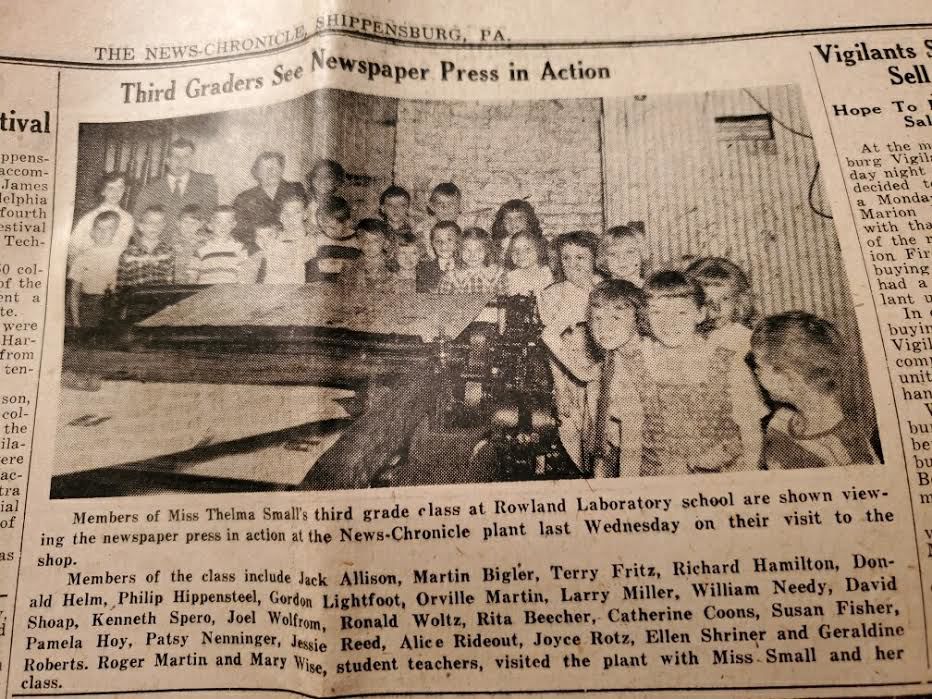 A group of third-graders from the Rowland Laboratory School (now Grace B. Luhrs Elementary) tours The News-Chronicle plant in 1953, and sees how the newspaper was put together and run through the printing press. 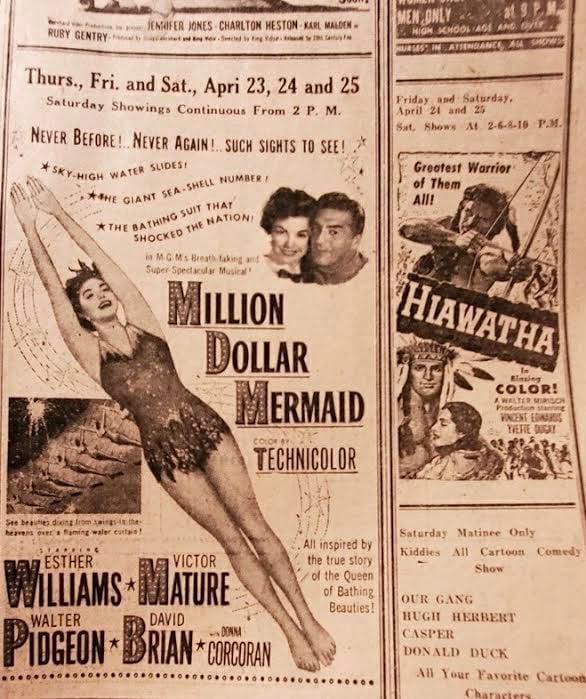 Ads from the April 1953 issue of The News-Chronicle feature local theaters in Shippensburg offering a variety of different movie options, including the ‘Million Dollar Mermaid,’ ‘Hiawatha,’ and the Saturday Matinee for children only featuring Donald Duck, Casper and more!

A group of third-graders from the Rowland Laboratory School (now Grace B. Luhrs Elementary) tours The News-Chronicle plant in 1953, and sees how the newspaper was put together and run through the printing press.

Ads from the April 1953 issue of The News-Chronicle feature local theaters in Shippensburg offering a variety of different movie options, including the ‘Million Dollar Mermaid,’ ‘Hiawatha,’ and the Saturday Matinee for children only featuring Donald Duck, Casper and more!

This week’s Blast from the Past features several items of interest that made the local headlines on April 29, 1952, and April 21, 1953.

As we face the reality of the COVID-19 pandemic, we are reminded, sadly, how our ‘normal’ activities have come to a complete stop. Events canceled, schools closed, churches empty. But, I saw headlines in the April 29, 1952, edition of The News-Chronicle that I hope will bring back happy memories for those of you who recall the events.

One was about the Junior-Senior Prom held in the gymnasium at the Shippensburg Area Joint High School. Now there’s a switch, having the prom in the high school gym! Wouldn’t it be neat to step back in time and revisit some of those old traditions? The theme of the prom was ‘Some Enchanted Evening,’ and featured the crowning of the Prom King & Queen, Mr. Ray Henry and Miss Patsy Rhine, and dancing to the music of Phil Young and his orchestra.

In another headline from that same paper, ‘200 Attend Rainy Day dance Friday at SAJHS,’ the story notes that approximately 200 students of the Shippensburg Area Joint High school attended the Rainy Day dance in the high school gymnasium under the sponsorship of the student council. Decorations for the spring event featured paper raindrops and colored umbrellas!

In the April 21, 1953, edition, headlines included news on several fronts. A group of third-graders from the former Rowland Laboratory School (now Grace B. Luhrs Elementary) visited The News-Chronicle and saw how the newspaper was put together, and run through the printing press. These days, the newspaper is not printed in-house. It is put together digitally, and printed in Huntingdon, then mailed to our subscribers.

In another headline from the same paper, ‘Burglars take $102 From Hess Station on West King Street.’ The service station located at the intersection of West King and Spring streets was broken into through a rear window. A sum of $98 was taken from the cash register and four dollars was taken from the stamp machine. Police investigating the burglary said similar robbery at the same location a year earlier still remained unsolved.

Another headline touted a ‘Record Crowd Attends Civic Club Dinner,’ and the smorgasbord was enjoyed by 80 members and guests! At this same event, $30 was made at the talent auction and was added to the nurse fund held by the Civic Club. Auction items included home-baked goods, baby sitting, general nursing, aprons and needlepoint. Top price of the evening went for a filled cake brought to the auction by Mrs. E.B. McClellan and sold for $3!

After further browsing, I came across the entertainment page and was looking through the ads for the local movie theaters, The Victory Theatre on Penn Street and The State Theater at Earl and Orange streets.

In the ad for the Victory Theatre, I couldn’t help but notice the popular movie at the time, ‘Million Dollar Mermaid.’ By the looks of the ad, this movie would make Disney’s Little Mermaid blush a bit!

In the ad for the State Theater, ‘Hiawatha’ was the popular movie on the big screen. I vaguely remember this movie, but have seen other versions of it over the years, as my hubby loves to sit and watch old cowboy movies.

If you look at the very bottom of the ad, you’ll see listed the Saturday Matinee Only…Kiddie All Cartoon Comedy Show

How many of you remember watching Huckleberry Hound, Yogi Bear, Underdog, Johnny Quest, Mighty Mouse, Tom & Jerry, Felix the Cat, The Heckle and Jeckle Show…and so many others? Now those were good cartoons! My personal favorites were Tom & Jerry, The Flintstones, and of course, The Jetsons! It’s funny how you look at those cartoons today and begin to think that maybe they actually had a glimpse into the future that possibly we didn’t have, or at least couldn’t grasp at the time. George Jetson and his hip wife Jane, and their quirky kids, Elroy and Judy were introduced to, and trying to live in a new automated, push-button world in the ‘60s, and here we are experiencing much of that as our reality today!

Even Fred, Wilma, Barney and Betty were onto something with all their craziness!

As always, I hope I stirred up some old memories that bring a smile to your face and a bit of laughter to your day. After all, we sure could use a whole lot more laughter nowadays!

Until next time, here’s to keeping the past alive…with a Blast!