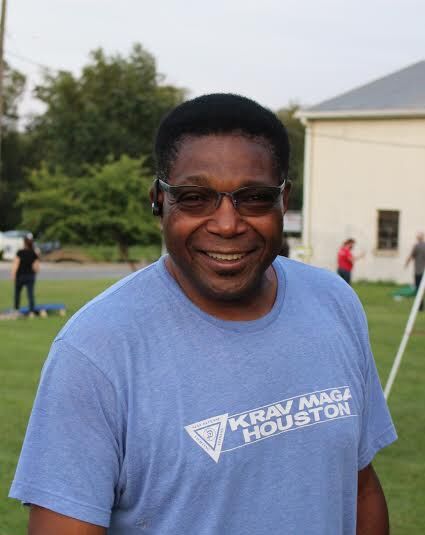 Jerome Kater was recently nominated by his peers at Katie’s Place for the WGAL ‘8 Who Care’ Award. Each of the volunteers at Katie’s Place wrote a  letter of recommendation for Kater earlier this summer, and he  recently received a call from WGAL telling him that he had been chosen  as one of eight finalists out of over 125 entries for the award. 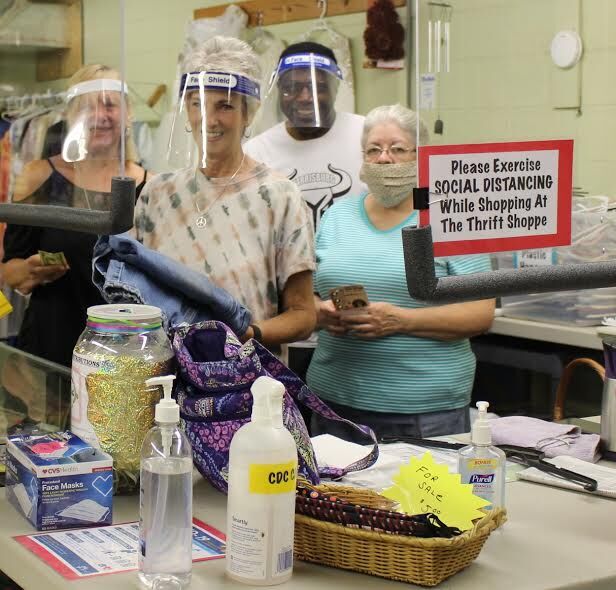 Jerome Kater is always ready and willing to lend a hand wherever he is needed at Katie’s Place. He is pictured here behind the counter of the thrift shop with fellow volunteers Nancy Crusey, Sue Piper and JoEllen Querry. 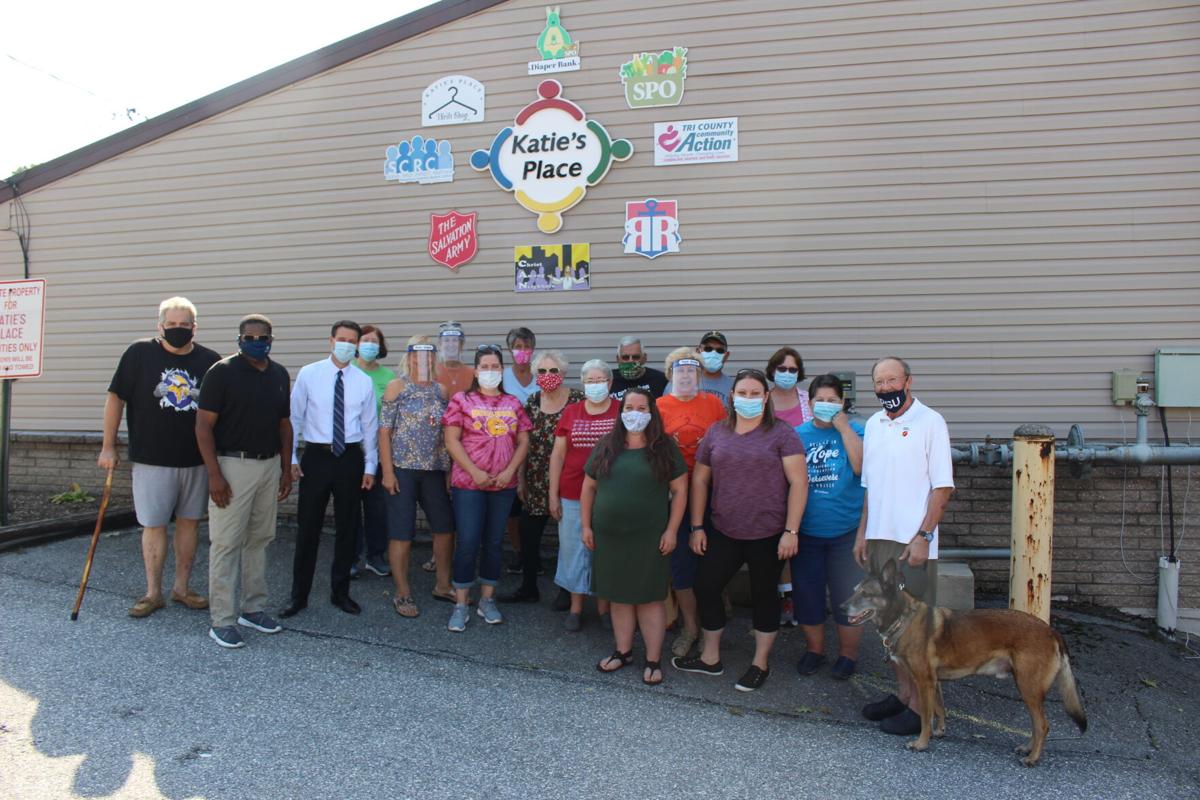 Jerome Kater was recently nominated by his peers at Katie’s Place for the WGAL ‘8 Who Care’ Award. Each of the volunteers at Katie’s Place wrote a  letter of recommendation for Kater earlier this summer, and he  recently received a call from WGAL telling him that he had been chosen  as one of eight finalists out of over 125 entries for the award.

Jerome Kater is always ready and willing to lend a hand wherever he is needed at Katie’s Place. He is pictured here behind the counter of the thrift shop with fellow volunteers Nancy Crusey, Sue Piper and JoEllen Querry.

If you have ever met Jerome Kater, you know what kind of person he is…a sweet, soft-spoken man whose heart is as big as his smile! He lives to serve others and would literally do anything to help anyone; an extraordinary man to say the least.

Kater recently learned that he was nominated for the WGAL “8 Who Care” Award by his peers at Katie’s Place in Shippensburg. On any given day, you can find Kater at Katie’s Place helping out, whether it’s making the rounds to check in and see that everything is going well in the offices, helping to load and unload merchandise, making repairs, on the his cell phone aiding a customer in need, or simply greeting shoppers as they come in the door. No matter what he’s doing, he has others’ needs in mind.

There are approximately 25 volunteers who work at Katie’s Place in some capacity, and of those more than two dozen friends, every one of them penned a letter of recommendation to WGAL nominating Kater for the award. The award honors folks in the Susquehanna Valley who give back to their communities in extraordinary ways. This year, there were more than 125 individuals nominated for the honor, with eight chosen as finalists. Kater is one of the 2020 finalists.

On Tuesday, WGAL’s morning anchor, Jere Gish, along with his cameraman, made their way to Katie’s Place to meet Shippensburg’s Extraordinary Man.

Gish was surprised, and quite taken aback by the size of the operation taking place inside the former Valley Baking Co. facility. “This is a big operation, quite incredible,” he said as he began his series of interviews with some of those who know Kater well, including his pastor, Nancy Hudson, and Katie’s Place Board Member and Thrift Store Manager Sue Piper.

He asked Hudson to tell him what Kater means to her congregation and the church community.

“Kater has been a member of our congregation (The Oasis of Love Church) since 1977. First, he started out as just the usual guy who walks in off the street, but then, of course, God began to do some amazing things in his life, and then he became an elder and he’s always been good with kids,” she explained.

“Jerome has always been the kind of person who is an ambassador for the town, that’s the best way I can describe him. He sees a need and he finds a way to meet that need; people like that are just needed throughout the world today!”

She added that he doesn’t have any prejudices of any kind that she knows of. “Brother Jerome has always been the kind of

person that if you are in need, he will reach out to you no matter how high or how low you are on the scale, and he’s had some amazing ideas over the years of how to reach people in the community and how to help them, and he has been able to implement those ideas, both in the town and in our church,”

Hudson said she knows that she can call on Kater literally any time of the day, and that’s a cool thing to be able to do. “Being the kind of person that Jerome is, he sets an example and causes others around him to up their game and that’s important, Hudson shared. “When you can bring someone up instead of bringing them down, that’s a wonderful thing. I think there is way too much of that in the world today; so many people like to criticize others, but Jerome is the kind of person who causes you to think in the other direction.”

She credited Kater for being able to work with the college students to keep order, but also to be able to let them have the college experience they so desire at that age. “He was so inspired to reach out to the students and work with them, and so God used him in our town to institute an order to keeping order

with the outside activities during the college years. He actually came up with some ideas of how to reach into the lives of the college students and keep order so that they could enjoy their college life and not get into trouble or commit crimes.” She said it has made such a difference in the town, and in their church as a whole. She concluded her interview by saying that Kater is so deserving of this honor, and she thanked Gish for coming and meeting with everyone, and seeing first-hand what he means to so many people in Shippensburg.

Carole Taylor is a volunteer at Katie’s Place, and she saw the 8 Who Care segment on Channel 8 and decided right away that Kater was deserving of this honor. “I certainly knew that Jerome fit the description of an extraordinary person, but I felt everyone here could write a letter of recommendation, and so we did just that,” Taylor explained. “I certainly don’t know everything Jerome does, but what I do see, and what I know to be true, is that a lot of what Jerome does changes people’s lives.”

Piper has known Kater for many years. When she was asked to describe what he does at Katie’s Place, Piper said, “Jerome is the go-to person here. He often is the person, who sees the need first-hand, or if someone contacts us through our Facebook page, Jerome will go to work to help that person out. He’ll get a crew together to help do whatever is needed -- to get furniture together, or clothing or whatever is needed to fill the need.”

“Tell me why Jerome is so important to you and to this place,” Gish inquired.

“Everybody knows Jerome, and he worked at Shippensburg University for many, many years. When he retired, he really didn’t retire, he just expanded his opportunities,” she said fondly. “He has a great work ethic and one that should be modeled. If anyone should learn anything from his example it’s that you get so much more from giving than receiving, and that’s something we can all learn from, and Jerome is a prime example of that! I can’t say enough good things about him; he is always steady, always dependable, and he puts forth more effort than five people at one time…he’s just amazing!”

In closing, Piper asked for prayers for Kater because he is involved in so many things, not just Katie’s Place. “He is so involved in the community and he’s constantly working and he needs our prayers to keep doing what he does. We are so very blessed to know Jerome and to have him as part of our Katie’s Place family.”

Gish explained that once all of the interviews have been conducted for all eight finalists, a panel of four judges then decides who will receive the award. “Honestly, everyone that is nominated is so deserving of this award already because they all do great things in their respective communities. It’s so hard to pick just one winner. In my eyes, they are all winners,” Gish said. The award recipient will be notified by WGAL when the selection is made.

Good luck, Jerome! You are already a winner in the eyes of the Shippensburg community!

NOTICE The 2019 proposed budget for the Borough of Orrstown

NOTICE The North Newton Township Board of Supervisors will hold