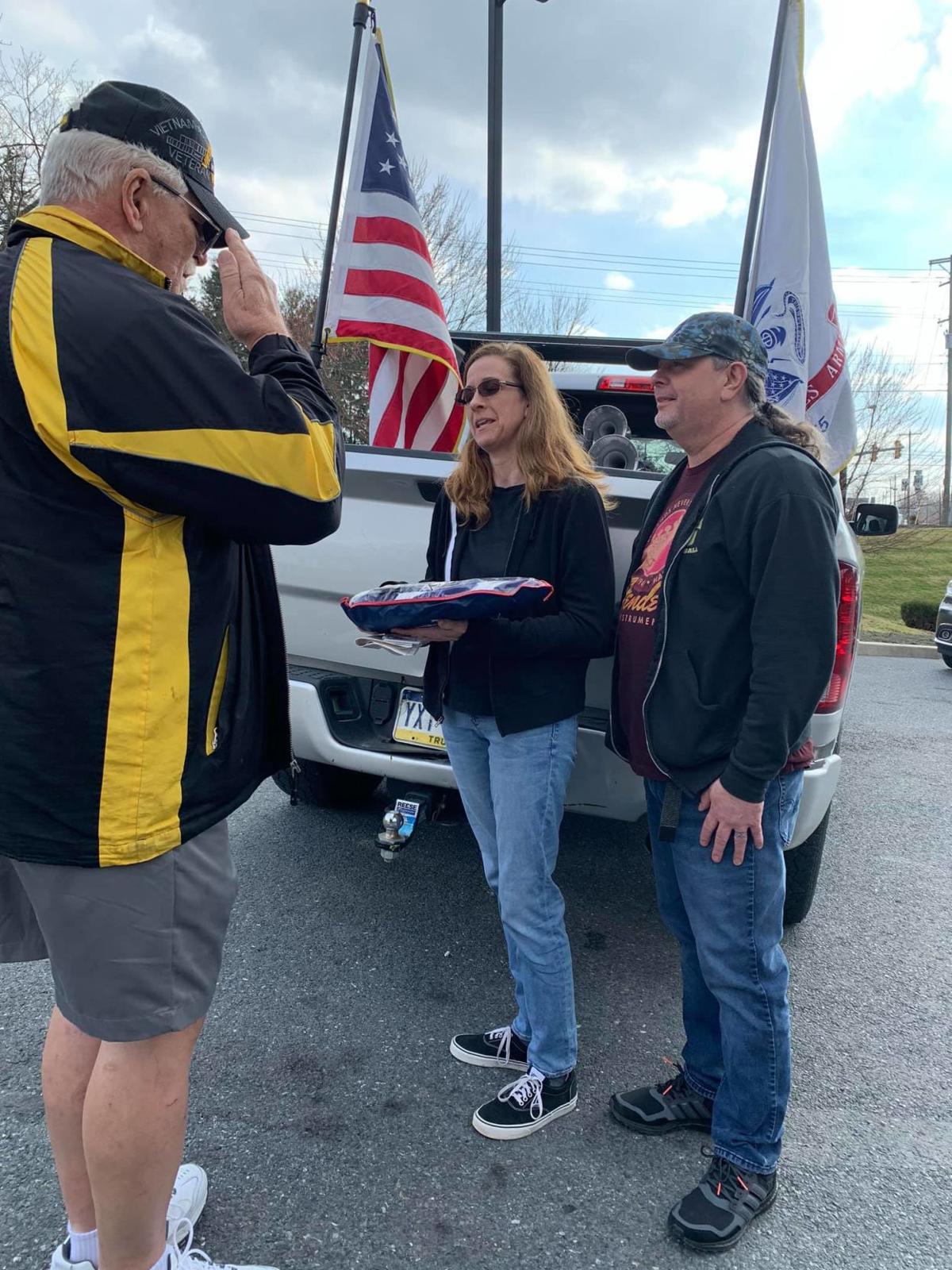 Tim Wright (left) of Shippensburg returned the lost flag of Vietnam Purple Heart and Bronze Star recipient John Torres to his daughter Shauna Torres-Owings and her husband Jeff Owings in a ceremony March 12. 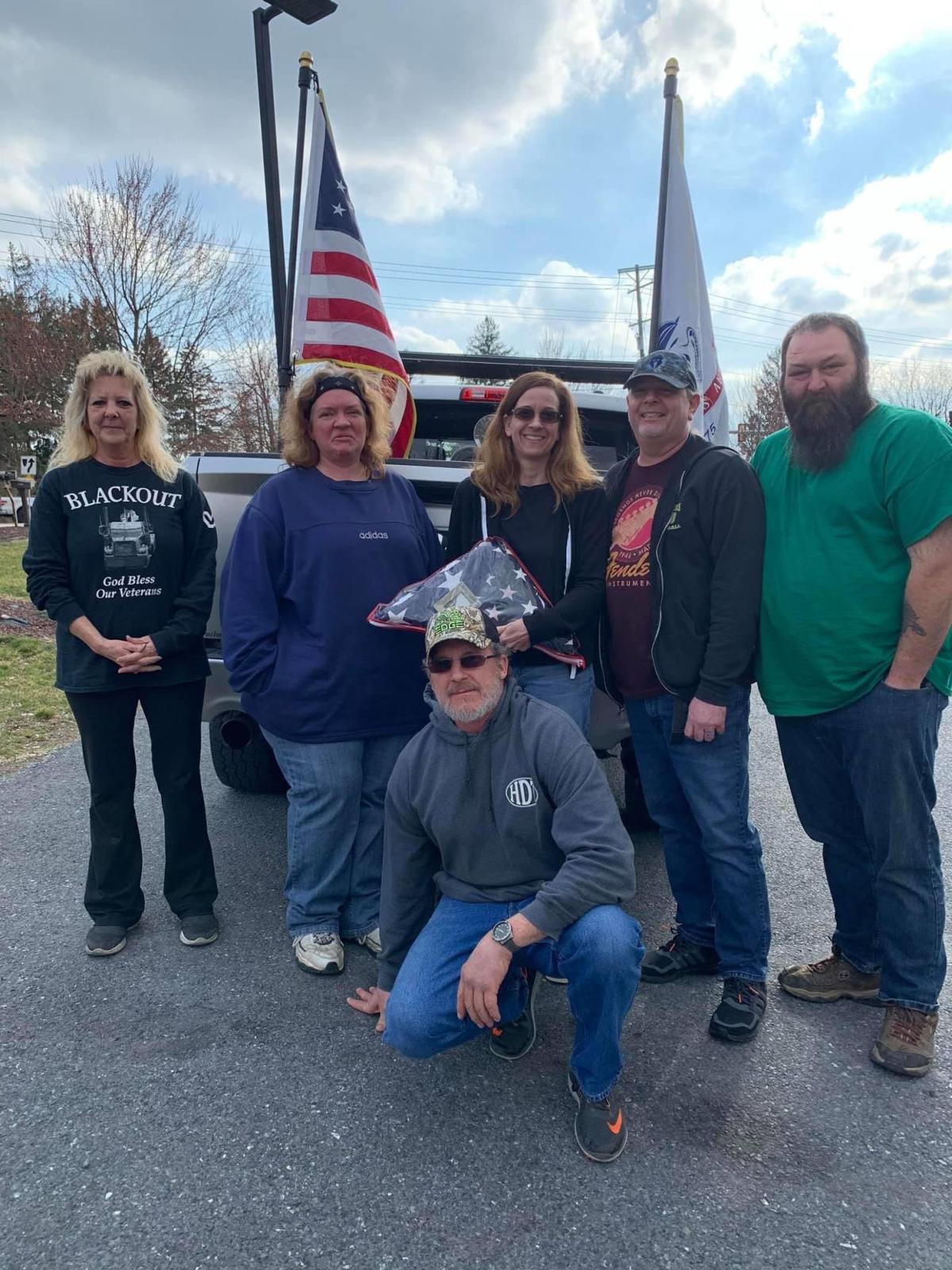 Tim Wright (left) of Shippensburg returned the lost flag of Vietnam Purple Heart and Bronze Star recipient John Torres to his daughter Shauna Torres-Owings and her husband Jeff Owings in a ceremony March 12.

The lost burial flag of a Vietnam Purple Heart and Bronze Star recipient took an unlikely journey back to its rightful owner recently because of the diligent work of a local Veteran.

Tim Wright of Shippensburg, himself a Vietnam Veteran, located the family of decorated U.S. soldier John Torres and returned the flag that had been discovered in an abandoned storage locker. He presented the flag to Torres’ daughter, Shauna Torres-Owings of Gettysburg, with honors in an emotional ceremony March 12.

“I was just glad that we were able to get [the flag] back to where it really belonged,” Wright said this past week. “She was a little emotional knowing that she finally had it. It’s very touching to me. I have presented flags before, and it is very hard to do. It takes a lot out of a person.”

The flag’s winding road home began when it was discovered in the storage locker, along with other items belonging to the family, including an obituary.

Mike Bradley, the man who purchased the locker, got in touch with friends Clorissa and Robert “Pork” Barges Jr., who then contacted Tina Steck, a local Veterans advocate and the organizer of POW/MIA Day at Shippensburg’s Memorial Park.

It was Steck who sought out the Wright family. Tim’s wife, Rosa, found Torres-Owings via Facebook and asked if Torres was her father. Torres-Owings responded, and arrangements were made to meet with all those involved in returning the flag just before the state-wide coronavirus shutdown.

“I was happy and very grateful that they took the time to do that,” Torres-Owings said. “My parents separated when I was a teenager, and my dad moved to the West Coast. I didn’t have much contact with him until I was an adult. I remember my father as being pretty laid-back and easy going. He had a good sense of humor. He was a proud Vietnam Veteran.”

Torres was an Armor Intelligence Specialist at the time of his honorable discharge from the Army. He passed away on June 4, 2002.

The project was a real labor of love for Wright, who has made it his mission to honor Veterans.

“It's been kind of a destiny of mine to honor our fallen soldiers and remember the sacrifice that they have made and their families have made. My family is very supportive and after 33 years of me being in [the military], they stand behind me in what I want to do.”

He continued, “I’m a Vietnam Veteran and I know how we were treated. Also, I had started a wall several years ago for soldiers we had lost in Iraq and Afghanistan. I’ve been doing that for several years. The reason I do it is I know how I was treated and a lot of others were treated and I don’t want that to be forgotten again.”

NOTICE Southampton Township - Cumberland County Board of Supervisors will