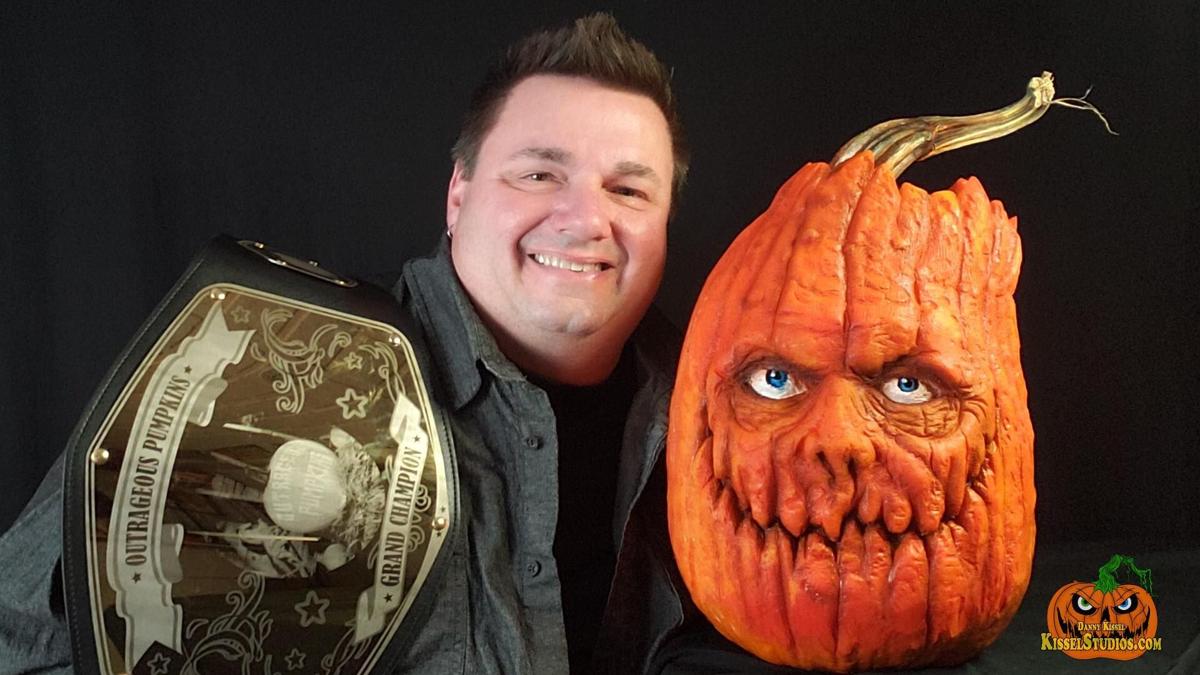 Danny Kissel of Newville is pictured with one of his lifelike sculptures he painted to look like he grew that way in the pumpkin patch, one of his many incredible creations that won him the ‘Outrageous Pumpkins’ competition on The Food Network. 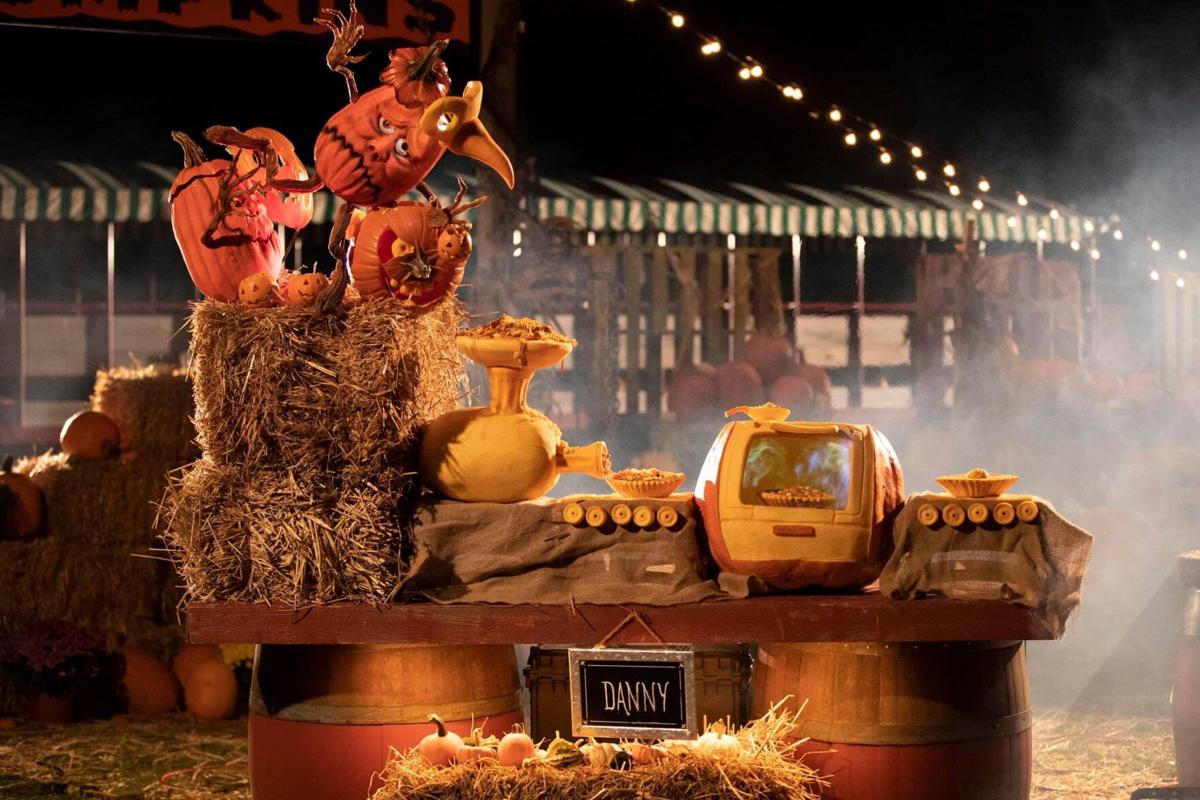 Danny Kissel of Newville said this was his favorite piece he sculpted on The Food Network’s ‘Outrageous Pumpkins.’ His pumpkin sculpture shows one pumpkin character tripping another into a meat grinder, turning him into a pumpkin pie. 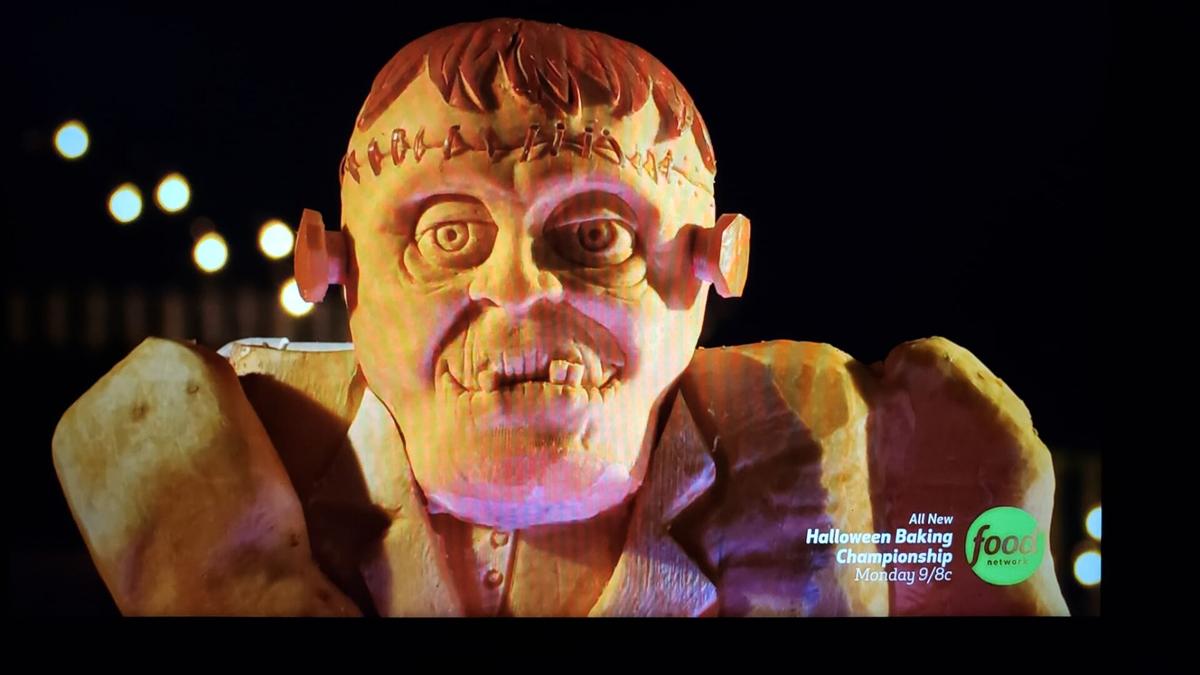 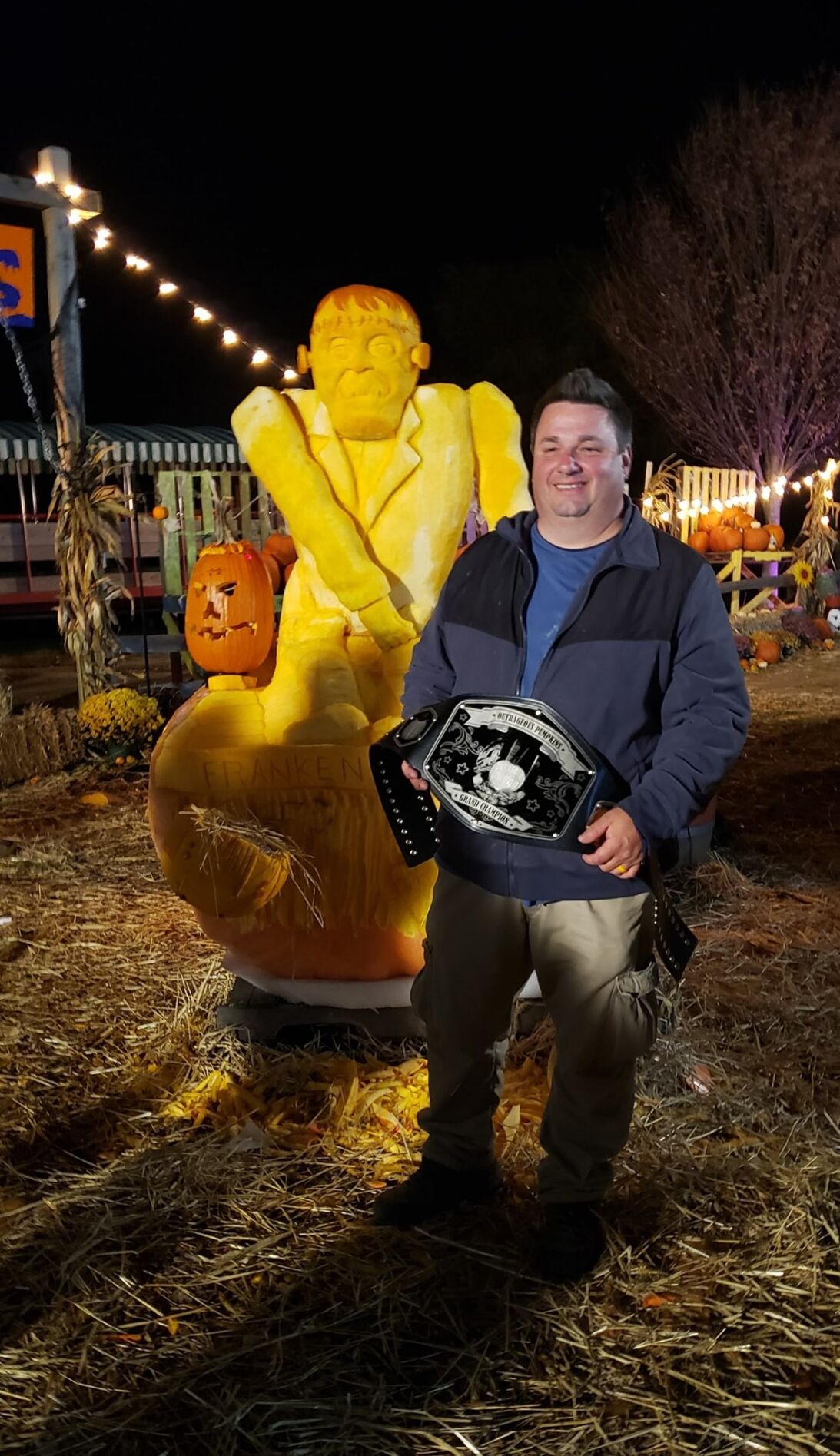 Danny Kissel of Newville is pictured with his winning sculpture ‘Frankenfloss’ on The Food Network’s ‘Outrageous Pumpkins.’ Kissel was deemed the winner of the competition, bringing home the grand prize of $25,000.

Danny Kissel of Newville is pictured with one of his lifelike sculptures he painted to look like he grew that way in the pumpkin patch, one of his many incredible creations that won him the ‘Outrageous Pumpkins’ competition on The Food Network.

Danny Kissel of Newville said this was his favorite piece he sculpted on The Food Network’s ‘Outrageous Pumpkins.’ His pumpkin sculpture shows one pumpkin character tripping another into a meat grinder, turning him into a pumpkin pie.

Danny Kissel of Newville is pictured with his winning sculpture ‘Frankenfloss’ on The Food Network’s ‘Outrageous Pumpkins.’ Kissel was deemed the winner of the competition, bringing home the grand prize of $25,000.

Danny Kissel of Newville has chiseled his way into the pumpkin carving world over the last six years, and his lifelike sculptures are getting him noticed.

His latest achievement was announced last week as he was named the champion of The Food Network’s “Outrageous Pumpkins” competition. Kissel went up against six other pumpkin carvers from across the U.S. -- Brandy Davis of Nampa, Idaho; Monique Hawk of San Diego, California; Tom Lindskog of Eugene, Oregon; Griffon Ramsey of Austin, Texas; David Smith of Columbus, Ohio; and Willy Tuz of Grand Junction, Colorado, as they vied for the title of champion.

“A traditional Halloween pastime is taken to the next level as host Alyson Hannigan welcomes seven expert pumpkin carvers to compete for the title of Outrageous Pumpkins Champion and a sweet $25,000 Halloween treat. The carvers face off in outrageous challenges that test their creativity and pumpkin prowess as they sculpt gravity-defying scenes that celebrate Halloween and impress judges Terri Hardin and Ray Villafane,” The Food Network website reads.

Kissel started carving pumpkins as a hobby several years ago, and decided when he saw other carvers competing in the network’s “Halloween Wars,” that one day, he too would grace viewers’ television screens. Some of his loved ones were skeptical, but in 2014, he got his 15 minutes of fame on the show. “Halloween Wars” is a competition that pairs pumpkin carvers with cake and candy artists on teams, and Kissel’s team lost in the second round. He redeemed himself in 2017 when he and his team carved and crafted their way to victory in the “Hayride of Horror” season.

Kissel said in a telephone interview last week it still hasn’t hit him that he won “Outrageous Pumpkins.”

“All of my social media went off at once. I think I had 300 comments and a few hundred text messages. I got 150 friend requests this week alone! Wednesday night, I saw a guy and his son, and this guy looked at me and said, ‘Outrageous Pumpkins?’ I said yep! His kid’s eyes got really big, and he said, ‘We are watching you on television.’ I said, ‘So who are you rooting for?’ and he said, ‘I’m definitely rooting for you!’ For people to look at you and tell you they watched you on TV, it’s still a little to get used to.”

Kissel said this season of “Outrageous Pumpkins” was a reboot of a previous challenge show that aired in 2008 or 2009.

“They did the same format. We had a jack-o-lantern challenge, a sculpture work challenge, an innovative lighting challenge and a final challenge that combines everything,” he explained.

For this season of “Outrageous Pumpkins,” the carvers were faced with three-hour smaller-scale challenges, and six-hour larger scale challenges per episode. For his jack-o-lantern sculpture, Kissel carved a 3 ½ to 4 foot witch with a cauldron. Lighting features were placed inside of the witch’s head and in the cauldron.

Kissel said for the larger-scale trick-or-treat challenge, he sculpted his favorite of the four -- two pumpkin children trick-or-treating, and one trips the other. The tripped pumpkin falls into a meat grinder, and turns into a perfect pumpkin pie.

“That was my favorite sculpture! I painted them, they were wearing masks. I had pumpkin guts and seeds on top of the meat grinder. We had to have a fire element, so I used a torch I use for ice carving to make the oven, and I had a rough looking pie going into the oven, one half done inside, and the finished pie coming out the other side.”

“The sculpture weighed 1,425 pounds,” Kissel noted. “He’s not built for doing the twist! The judges had loved what I had done so far, and I wanted to make sure this one showcased everything I could do. It had fire, lighting, speakers playing music and a jack-o-lantern spinning on the stage.”

Kissel said he is used to competing on television now.

“When I started on ‘Halloween Wars’ six years ago, I was new to television, and I was fairly new to pumpkin carving; I wasn’t really confident in my work. After we lost the first time, I always said if I had another chance, I would do things differently, I would speak up a little more. When we did ‘Hayride of Horror,’ there were two teams and three episodes. We won the first and third challenges, and were named the champions! That was my first time really winning anything. I was happy with what I had done, and was super proud of my team.”

Kissel noted one of the things he likes about “Outrageous Pumpkins” is it is just pumpkin carving, and not collaborating with other artists. However, that can also be one of the obstacles.

“This was literally win on your own, or fall on your own,” he said. “One of my teammates from ‘Halloween Wars,’ Dave, was now my competitor. I knew most of the other contestants because of the small world of pumpkin carving.”

Kissel said he usually has about 40 ideas for pumpkin sculptures in his head at any given time. The challenge with designing the sculptures on the fly is coming up with a twist that his competitors won’t see coming, as well as incorporating twists to fit the challenge’s theme.

“I thought about the pumpkin pie idea years ago,” he noted. “I thought the trick-or-treat challenge was perfect for it. For Frankenstein, I needed a recognizable character and a recognizable dance. He doesn’t need a massive amount of detail. What television doesn’t show you is your ideas evolve as you go. Sometimes, you might be three hours in and change a little bit here or there.”

One of the challenges of this season, he added, was the fact that they were working by themselves.

“You have no one to lean on, no one to bounce ideas off of. Your biggest obstacle can be yourself, and you have to make sure you don’t overthink everything.”

He said working with the elements outdoors can also pose a challenge. The show was filmed last November in Long Island, New York.

“You don’t typically carve with gloves and coats on,” he said. “That’s really hard to deal with.”

Kissel said the best part of any television show are the friendships you build.

“I knew of Willy and his work, but we never hung out before. We’ve talked probably every other day since then,” he said. “Dave and I became friends outside of television, and bonded even more on the shows.”

Kissel is still carving pumpkins, and will be in Pittsburgh Oct. 25 through 29 for the Pittsburgh Monster Pumpkins Pop-Up to put on an underwater themed display on the North Shore near Heinz Field with three other carvers. In December, he will start carving ice sculptures in the area for different events and festivals.

What tips does Kissel have for local families carving their own pumpkins?

“The best tip I can give people is how to preserve them. Pumpkins do not like sunlight or heat and they need water. If the sun is beating on them, they will spoil sooner. Keep them in the shade, keep them cool. Cut the bottom off instead of the top. The stem will keep feeding it nutrients. Just make a circle on the bottom big enough for your light. A little Clorox Clean Up Spray will keep bugs and critters away from them. If they smell any bleach, they won’t get close to it.”

He credited his family for continuing to support him through his larger-than-life hobby, and quipped that he told his wife, Christie, that if he won “Outrageous Pumpkins,” he would build a garage on their property so he would stop bringing pumpkins into their family room.

“My family is very supportive of everything I do, and is always here to listen to me complain or have me bounce ideas off of them. Our sons, Kyle and Hunter, are now 20 and 25, and they will tell me if something doesn’t look right. I have the most understanding wife in the world -- every artist does. No one really sees the amount of time we spend on our hobbies at home. Wives of artists put up with a lot.”

Kissel said as he looks back at his hobby, he has come a long way, and is thankful for the opportunities he has had.

“It’s been a really wild ride,” he said. “To be able to see ‘Outrageous Pumpkins,’ and to be welcomed into this community as pumpkin carvers, and to win the show that started it out for me, it’s really come full circle. When I started, I watched Ray Villafane and studied his techniques. We became really great friends over the years, and we have very different styles. I like to go giant with mine, and he likes to do single pumpkins in larger scenes. It’s cool to do the exact same thing as someone who inspired you, and hopefully inspiring someone else to do the same thing. To get the respect of somebody you look up to is amazing!”